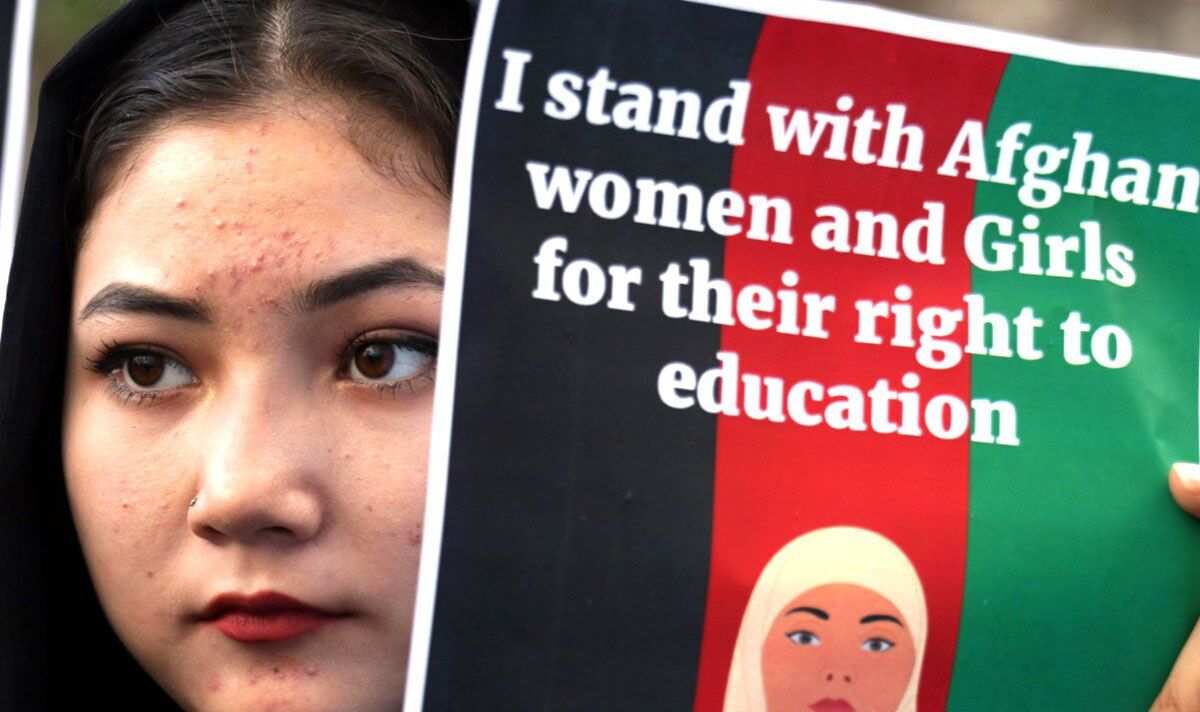 Women in Afghanistan have been sharing the difficulties facing them since the ultra-conservative Taliban resumed power in the summer of 2021, with the “situation getting tougher for women day by day”. The BBC spoke to women across Afghanistan, including a dressmaker, a teacher, a karate trainer, an audiobook narrator, a religious school teacher and a one-time national team golfer on Tuesday, with all of them reporting significantly reduced rights. The discriminatory measures come as at least 124 people have died in severe winter conditions this year, as half the population face severe hunger and 97 percent are in poverty.

As starvation continues to kill hundreds across Afghanistan, the Taliban decided in December to ban female aid workers from carrying out charitable work.

The move was the latest in a series of discriminatory measures put in place since they assumed power in the summer of 2021, and has compounded the problems brought on by severe poverty in the nation.

One female psychologist and secret school teacher in the country told the BBC that women are “afraid” just to go outside for fear of reprimand.

She said: “Day by day the situation gets tougher for women… and even the people who used to laugh, they are sad now, they are afraid of it and feel like what if we cannot go outside to bring bread for our families.”

Addressing the poverty plaguing the nation, she said: “You can see children playing here but most of them don’t have enough clothes, shoes which are good for this winter situation.”

She added: “I miss my loud laughs and I used to go without fear anywhere and anytime, but now I’m worried that I’m not able to raise my voice…if I do, no one will notice.”

A young 23-year-old woman, who used to work as a police officer before the Taliban took over, said she was unable to complete her studies because the Taliban banned university education for women last month.

She said: “I was left in a world of sorrow. Since I was the eldest in the family, all the responsibilities were on my shoulders, I was the sole breadwinner of my family.

She told the BBC’s Yalda Hakim: “There’s a lack of electricity, a lack of security and safety and some of the girls are not in the position to pay their internet bill.”

Former golfer Shaista Safi said she was “very disappointed about the future” and said she “missed the working environment”.

She said: “Before the Taliban takeover, I was thinking about progress and development because, at that time, women had their rights and played an active role in society, but at the moment I am very disappointed about the future.”

“In a society where women have not yet been recognized, how can I think about progress and achieving my dreams? In this situation, our only hope is Allah [God]. I miss the working environment, safe environment, security, good economy, and travelling with friends.

“I really wonder if these days will happen again. It is very difficult to live in the current situation, and only the one who lives here can understand it.”

READ NEXT: Brave Afghan woman stands up to the Taliban with solo protest
Taliban sparks outrage as Islamist regime bans women from university
Taliban thug beats women for shopping without male ‘guardians
How brave women are fighting back against the Taliban in Afghanistan
Women brutally flogged by Taliban in football stadium