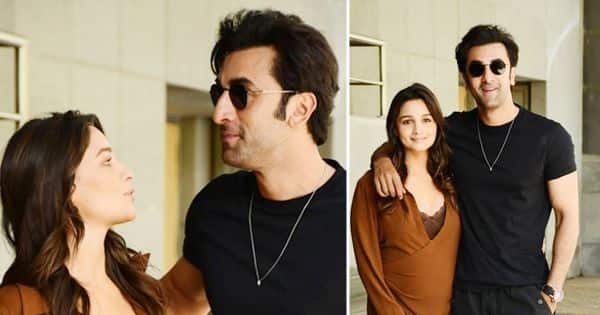 Alia Bhatt and Ranbir Kapoor finally come together after their marriage appearance and boy, they are making their fans swoon. The first appearance they made as man and wife after marriage and now they posed as soon-to-be parents together. Alia Bhatt’s pregnancy glow and that adorable baby bump are unmissable as she poses with hubby Ranbir Kapoor. The couple were spotted in the city along with their Brahmastra director Ayan Mukerji and fans are speculating that they have kickstarted the promotions of their first film together. Well, the fans just cannot take their eyes off this beautiful couple. Also Read – Brahmastra trailer review: Fans compare Ranbir Kapoor-Alia Bhatt’s fantasy-drama with Lord of the Rings; call it ‘magical’

Ranbir and Alia look adorable together as they pose for the paparazzi. Rania fans are going gaga over their chemistry and are noticing how RK’s hand is constantly on his wifey Alia’s shoulder and his smile proves that he is the happiest man on the earth. While Alia Bhatt is beaming with joy as her latest release Darlings has been receiving a lot of love and people are going gaga over her performance. The film has also been released in Paris and this is one of the biggest achievements for soon-to-be mommy Alia Bhatt. Also Read – Brahmastra teaser: Makers drop EPIC glimpse of Ranbir Kapoor-Alia Bhatt starrer; REVEAL trailer release date

Alia Bhatt announced her pregnancy on her Instagram just a few weeks ago and her fans showed all their love for the couple. While Alia and Ranbir kick starts the promotion of Brahmastra, the couple’s fans can not wait to see the newborn soon. Alia and Ranbir’s baby’s arrival is expected to be next year in January and the couple has planned to finish all their professional commitments before then and spend time with each other before the arrival of their baby.