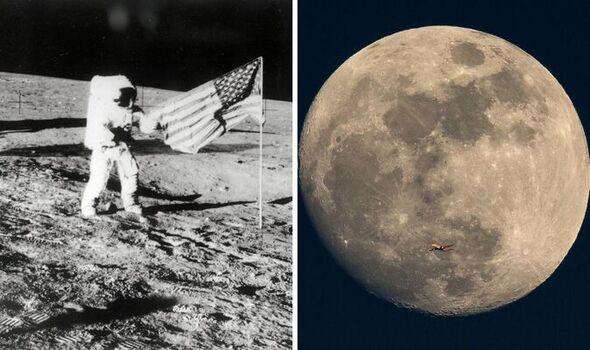 Apollo 12: 3 of the most bizarre moon landing conspiracy theories debunked

During the mission some 53 years ago, the crew were tasked with carrying out a number of tasks, including visiting Surveyor 3, the unmanned robot sent on the first mission to carry a surface-soil sampling-scoop, and removing some of its parts to be returned back to Earth.

Apollo 12 was prepared to step in for Apollo 11 if it failed in its mission to take the first men to the moon. But it didn’t, and Neil Armstrong’s crew made history. It meant that Apollo 12’s launch, in the end just four months after Apollo 11, was delayed for two months.

Reflecting on the mission, Bean later said: “I find it curious that I never heard any astronaut say that he wanted to go to the Moon so he would be able to look back and see the Earth. We all wanted to see what the Moon looked like close up. Yet, for most of us, the most memorable sight was not of the Moon but of our beautiful blue and white home, moving majestically around the sun, all alone and infinite black space.”

While the moon landings inspired generations to come, they also piqued the suspicion of others, and ever since, conspiracy theories concerning whether the Moon landings were, in fact, staged, have abounded. Now, Express.co.uk takes a look at some of the most bizarre and how they’ve been debunked.

NASA theories: A footprint on the Moon (Image: GETTY)

The Moon landings were rigged

The timeless footage of Armstrong becoming the first person to walk on the Moon stunned the world when it was beamed down to Earth and into the homes of billions of people across the planet in July, 1969.

Yet, approximately five percent of Americans believe the landings, and Armstrong’s walk, were actually faked.

Critics ask why, for example, were there no stars in the photos of the moonwalkers, and most pressingly why, for a place devoid of air, could the US flag planted by Armstrong into the ground of the Moon be seen fluttering?

In an article for Live Science earlier this year, author Yasemin Saplakoglu debunked the theory, noting that there “aren’t any stars in the photo because daylight on the surface washes them out, just like it does on our planet”.

She added: “The US flag is fluttering because it has a metal rod sewn into it to give it the appearance of moving in the ‘wind.'”

JUST IN: Rare Apollo 11 photo of Neil Armstrong on the Moon goes on auction

Extra-terrestrial life on the Moon

According to one outlandish theory the Moon itself is not actually real. Instead, it is a vast space station used by aliens to monitor Earth.

This theory was created by Scott C. Waring, who even claimed to have two images from 2013 that backed up his theory. On his website, he wrote: “The evidence that NASA deleted is not just a UFO, but is also 100 percent evidence that the moon is not real, but actually an alien space station.”

The UFO enthusiast also argued that on the “dark side of the Moon”, there was in fact a massive alien city. These conclusions were reached after Waring analysed photographs of the Giordano Bruno crater. There, he claimed, were a number of damaged structures that could be millions of years old, including some that looked like ships.

NASA dismissed the theory, claiming the objects seen on the Moon were “simply mind tricks”.

DON’T MISS:
NASA’s Artemis mission set to reach Moon in hours [ANALYSIS]
Humans could be living on the Moon before the decade is out, NASA says [INSIGHT]
Earth is reaching its own finite frontier [COMMENT]

Richard Hoagland, a renowned conspiracy theorist, has claimed across the decades that lost civilisations actually have lived on the Moon and other planets such as Mars and Venus.

In his research, the author of titles such as The Monuments of Mars: A City on the Edge of Forever, claimed that NASA has engaged in a “coverup” about many objects found on the Moon, and in the 1960 report, Proposed Studies on the Implications of Peaceful Space Activities for Human Affairs, said the space agency had deliberately withheld information from the public with regards to aliens.

Images from the Lunar Orbiter in February 1967, Hoagland also claimed, showed a “mile-high piece of something rising from the surface of the Moon”, which the theorist claimed should be called the “Shard”. He argued that that “no geological phenomenon can explain it, so it must be artificially made”.

However, it later emerged that Hoagland had actually processed the image by using filters on the photograph, turning the spot of light in the image into the “Shard”.