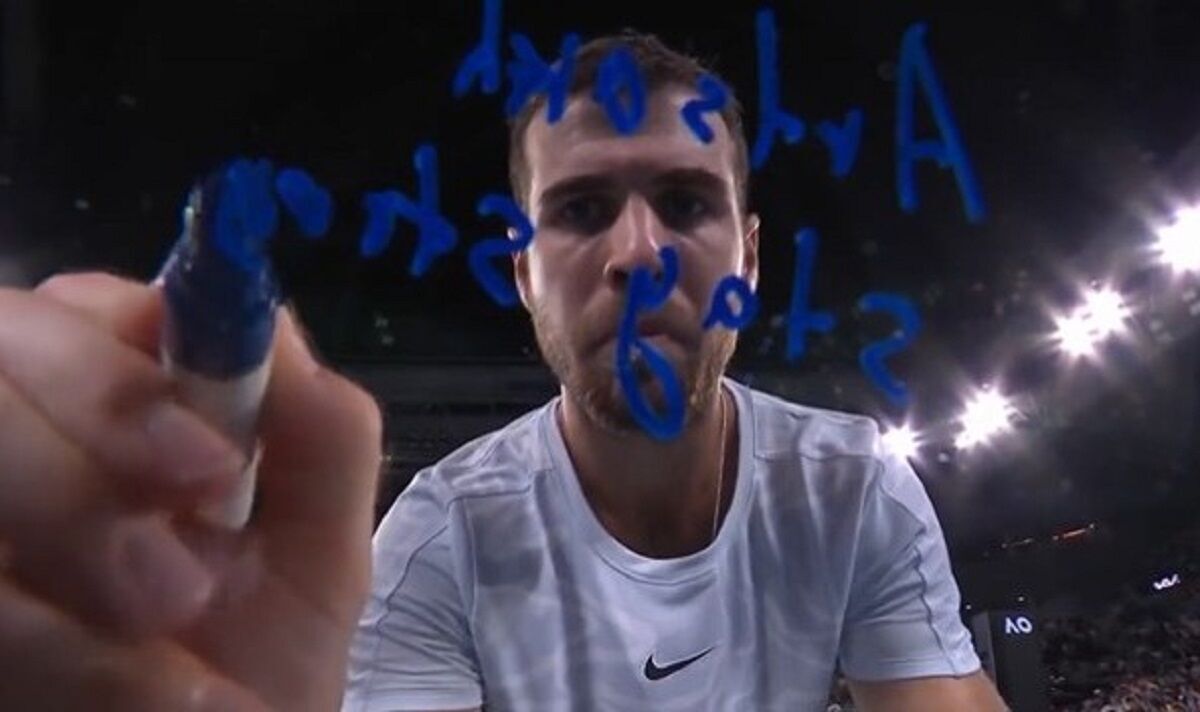 Karen Khachanov has reached his first Australian Open semi-finals after Azerbaijan called for the Russian-Armenian to be “punished” for his “provocation” in support of a breakaway republic. The Olympic silver medallist got to the last four here after American Seb Korda retired in the third set with a wrist injury.

The No.18 seed has used his run here to bring attention to the conflict in the disputed region of Artsakh – or Nagorno Karabakh – which is an Armenian enclave in Azerbaijan. Armenania claims the area has been blockaded by Azerbaijan since December 12.

Khachanov, whose father Abgar is Armenian, said: “I have Armenian roots. From my father’s side, from my grandfather’s side, even from my mom’s side. I’m half Armenian. To be honest, I don’t want to go deeper than that, and I just wanted to show strength and support to my people. That’s it.”

After reaching the last eight, he wrote a message on a TV camera: “Keep believing until the very end. Artsakh, hold on!” Following his victory over American Frances Tiafoe in the previous round, he wrote on the lens “Artsakh stay strong”.

Artsakh – or Nagorno-Karabakh – first broke away from Azerbaijan in 1988 and became a self-proclaimed republic following the collapse of the Soviet Union in 1991. It is a internationally recognised as part of Azerbaijan but has a majority Armenian population.

Armenia claims a road connecting Nagorno-Karabakh with Armenia has blocked by Azerbaijan for the past six weeks. Azerbaijan denies the claims – and has now written to the International Tennis Federation to complain about Khachanov.

“Karen Khachanov, a Russian athlete of Armenian origin, who reached the 1/16 finals in the men’s competition, attracted attention with his hateful act. Thus, after claiming 3-1 victory over his American rival Frances Tiafoe. Khachanov wrote “Artsakh stay strong” on the camera as his heartfelt words.”

The ATF has now called on the Australian Open and the ITF to take future action, adding: “The Azerbaijan Tennis Federation’s letter presented facts and legal documents regarding the provocation against Azerbaijan. The ATF condemned this act and demanded that the tennis player be punished and urged the International Tennis Federation to take harsh measures for prevention of such incidents in the future.”

The four-time title winner was then asked whether he had heard from the ITF following the ATF’s letter but was unaware of the situation, responding: “I didn’t hear anything about that.” When asked whether anyone had told him not to write messages of support to Artsakh, he said: “I mean, so far, no.”

TV cameras did not pick up Khachanov’s message on the camers lens after advancing to the semi-final as he wrote: “Don’t forget your roots”. Tennis Australia said there no reason it was not shown on TV, as the camera message are not always and not deliberately not shown

Khachanov was banned from Wimbledon last year following the Russian invasion of Ukraine. The All England Club is now considering whether to reimpose the suspensions this year. Asked if he had a message for Wimbledon, Khachanov said: “No message. Just whatever they decide. I mean, what can I do? I think my words would not change anything, right, in a way. So I don’t want to say anything, because is just no point. If they achieved something, I think you better ask them, not me.”