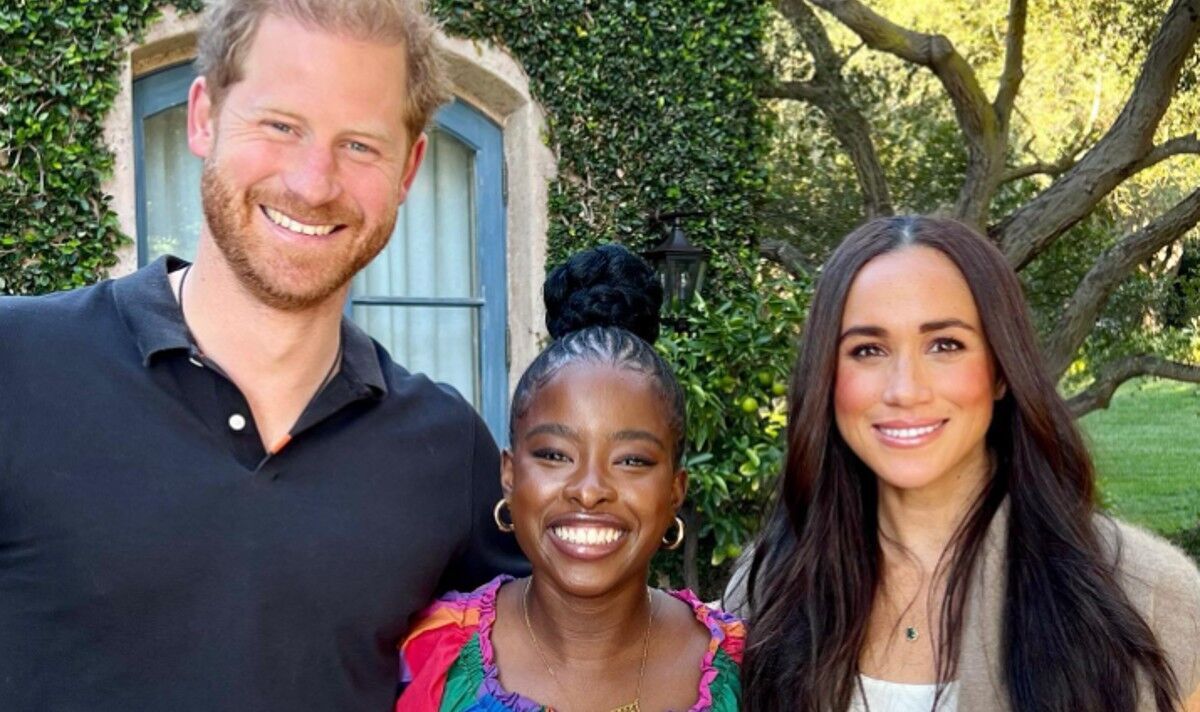 Meghan Markle and Prince Harry have posed for a picture with one of the Duchess’s podcast guests. Poet Amanda Gorman took to Instagram to reveal she had appeared on Archetypes to discuss “the power that women possess as changemakers”.

Amanda shared the snap showing her standing in between Harry and Meghan as the trio smiled for the camera.

She said: “Beyond thrilled to have had the honour of speaking with the Duchess on her podcast, Archetypes, where I spoke on the power that women possess as changemakers. Thank you so much for having me!”

Meghan looks stunning in a white top and neutral cardigan, with natural makeup and loose hair around her shoulders.

Harry keeps it casual in a navy polo shirt, while Amanda wears a colourful dress.

Sussex fans will no doubt be looking forward to the podcast episode with Amanda.

Meghan launched Archetypes earlier this year as part of her and Harry’s Spotify deal.

The series sees her joined by guests to “investigate, dissect, and subvert the labels that try to hold women back”.

In the latest episode, which dropped on Tuesday, the Duchess was in conversation with actress Michaela Jae Rodriguez and Sex And The City creator Candace Bushnell.

Introducing the episode, the Duchess said: “And today we’re talking about living outside of the box – the box that we’ve talked about all season on this podcast, the different boxes that we try to get pushed inside of.

“What is it like when you live beyond those lines? When you colour outside of them, freely expressing our identities, and embracing the nuances that make us quite simply a human being.”

The episode, entitled “Beyond the Archetype: Human, Being”, begins with Meghan making a surprise visit to the Immaculate Heart all-girls Catholic school in Los Angeles, where she was a pupil from the age of 12 until 17.

She said those are “really formative years”, adding: “They certainly were for me. And let me just say, being back there, the energy, it was… it was palpable.

“I was happy to be back there and it was also really fun, especially when I made a surprise visit and I popped into some of the young ladies in volleyball practice.”

In the episode, which is the penultimate in the series, Meghan revealed her mother Doria Ragland still calls her “flower” as she discussed nicknames with Michaela Jae.

Speaking to Candace, Meghan described the characters in Sex And The City – Carrie, Samantha, Miranda and Charlotte – as “iconic”.

“And in her recent novel and one-woman show Is There Still Sex In The City? she continues to peel back the layers of what women can be in all stages of life.”