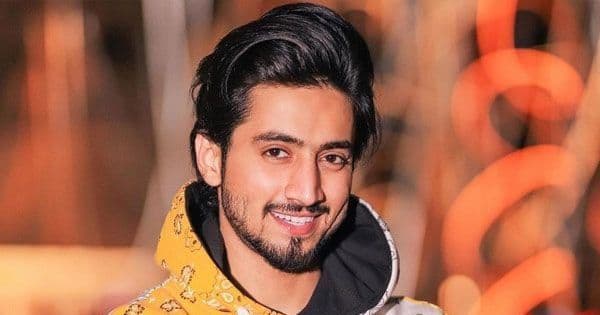 Faisal Shaikh’s debut on TV has been a good one. He is famous as an Instagram influencer, and did a couple of web shows too. Now, he is seen on Khatron Ke Khiladi 12 where he is going good. It is rumoured that he has won the stunt reality show hosted by Rohit Shetty. Faisal Shaikh is also one of those who has organically managed to impress the viewers. He will now be seen on Jhalak Dikhhla Jaa 10 too. He know that he is a good dancer but Jhalak is going to be a new arena for him. But Faisal Shaikh fans want more from him. Also Read – Trending TV News Today: Big goof-up in Anupamaa, Shraddha Arya clarifies on on Jhalak Dikhla Jaa 10 participation and more

Faisal Shaikh is seen coming out of his car for the birthday bash of Jannat Zubair Rahmani. He is asked about whether he will do more TV shows in the future. He says that he is lucky to get so much love on Khatron Ke Khiladi 12 hosted by Rohit Shetty. Faisal tells the media that he is kicked for Jhalak and when he is asked about Bigg Boss 16, he says, “Inshallah wahan bhi chale jayenge…”…Does this mean that he is indeed confirmed for the show? Many portals have said that he is one of the confirmed contestants. Also Read – Top TV News Weekly Rewind: Sonali Phogat murder case, Raju Srivastava health update, Yeh Rishta Kya Kehlata Hai leap and more

If he indeed comes on Bigg Boss 16, he will be one of the rare celebs to do three reality shows back to back. He will join the club of Rubina Dilaik. She also did Bigg Boss 14, Khatron Ke Khiladi 12 and now Jhalak Dikhhlaa Jaa 10. Given his organic fan base and entertaining personality, Faisal Shaikh should do well on Salman Khan‘s Bigg Boss 16. Also Read – Trending TV News Today: Raju Srivastava regains consciousness, The Kapil Sharma Show new cast, details of Sonali Phogat’s autopsy report and more

The other confirmed names are apparently Munawar Faruqui, Vivian Dsena, Kanika Mann and maybe Mohit Malik. Bigg Boss 16 will start from mid-October. Let us see if Faisal Shaikh makes an entry as a Bigg Boss 16 wild card or has a complete three months journey.