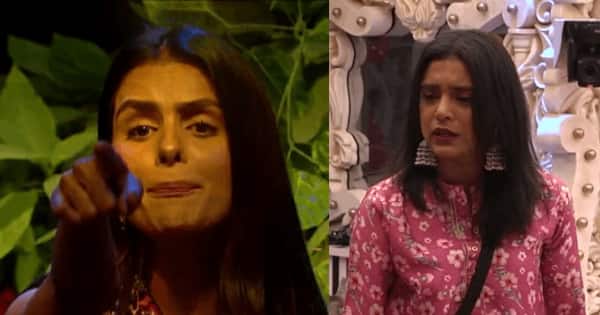 Bigg Boss 16 Promo: Sumbul Touqeer Khan gets all SAVAGE as she nominates Priyanka Chahar Choudhary; fans say ‘no one rocks nominations as she does’ [VIEW TWEETS]

Bigg Boss 16 is getting interesting by the day. The contestants are making sure to put their best foot forward and give it all to the game. The top eight contestants of the show are Shiv Thakare, Priyanka Chahar Choudhary, Shalin Bhanot, Tina Datta, Nimrit Kaur Ahluwalia, MC Stan, Sumbul Touqeer Khan, and Archana Gautam. Well, nominations are here and the latest promo gives a glimpse of the dramatic task that took place inside the house. Netizens are quite impressed with Sumbul Touqeer Khan’s savage avatar. Also Read – Bigg Boss 16: Sumbul Touqeer Khan steadily finds fans in neutral viewers; from calling her obsessed with Shalin Bhanot to liking her maturity, here’s a recap

In the latest promo, we see Sumbul Touqeer Khan nominating Priyanka Chahar Choudhary for elimination. The Imlie star says that the Udaariyaan actress supports the truth as per her convenience. She also says that one should not equate someone’s tears to weakness. Priyanka gets furious and asks Sumbul to not give filmy dialogues. Sumbul gets all savage and dramatic and lies on the floor. MC Stan, Nimrit Kaur Ahluwalia and Shiv Thakare could not stop laughing. Also Read – Bigg Boss 16 winner: Ex contestants name the celeb with the highest chances to take home the trophy and prize money

All the fans of Sumbul Touqeer Khan are quite impressed with her dramatic avatar. Many are saying that she has shown quite good progress and she deserves to be in the game. Also Read – Bigg Boss 16: Shalin Bhanot’s ex-wife Dalljiet Kaur and son Jaydon wish him in the sweetest manner after he faces ‘bullying’ in the house

Check out Bigg Boss 16 promo below:

Check out the tweets below:

Nobody rocks the nominations like my girl does ??????#SumbulTouqeerKhan pic.twitter.com/xObLJNrAf4

I love this sumbul, my drama queen!!#SumbulTouqeerKhan #BB16 #BiggBoss16 pic.twitter.com/OdKjJEAzDt

You taunt & bully her about her tears or she giving filmy dialogues….she will give you DRAMA!!!