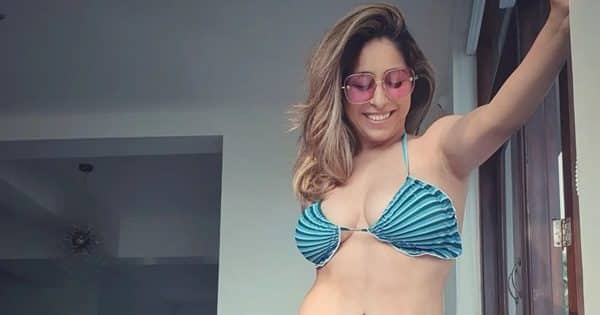 Bigg Boss OTT fame and singer Neha Bhasin has always been a fearless person when it comes to voicing her opinion. She has always taken extreme experimental steps in her life and she doesn’t give two hoots about what people say and feel about her. She recently shared some of her smouldering pictures in itsy bitsy bikini and took a sly dig at body-shamers in her Instagram post. Also Read – Janhvi Kapoor, Nora Fatehi, Niti Taylor and other divas step out in the best of blues on the red carpet [View Pics]

In her post, Neha was seen happily flaunting her enviable curves in a aqua bikini. In the first pictures, she was seen sitting on the edge of her house window showing off her side profile in the bikini. She was all smiles for the photograph and she left her hair open while donning tinted sunglasses. Also Read – Bigg Boss OTT fame Neha Bhasin is not keen to embrace motherhood; says, ‘I never had a maternal instinct’

In the second picture, Neha was seen showing off her belly piercing and striking a pose while flaunting her infectious smile to the camera. Alongside her post, she wrote a note for the people who have different kinds of opinions about her. “Your opinion of me does not define who I am,” she captioned her images. Also Read – Neha Bhasin and bestie Sunanda Wong raise the temperature with their beach babe avatars; pictures set internet ablaze

In another post, Neha was twisting and twirling her body wearing the same two piece bikini and she looked happier than ever. She used pop singer Rihanna‘s song Umbrella for the video and wrote, “Soaking in the sun then back to the grind.”

Meanwhile, Neha recently revealed that she is not too keen to embrace motherhood and she would like to adopt and start her own orphanage where she will take care of atleast 10-12 children and give them everything that they have desired. She also said that she has never had motherly instinct or the urge to become a mother in her life.

Neha is married to Sameer Uddin, a music composer, in a western wedding in Tuscany, Italy since 2016.