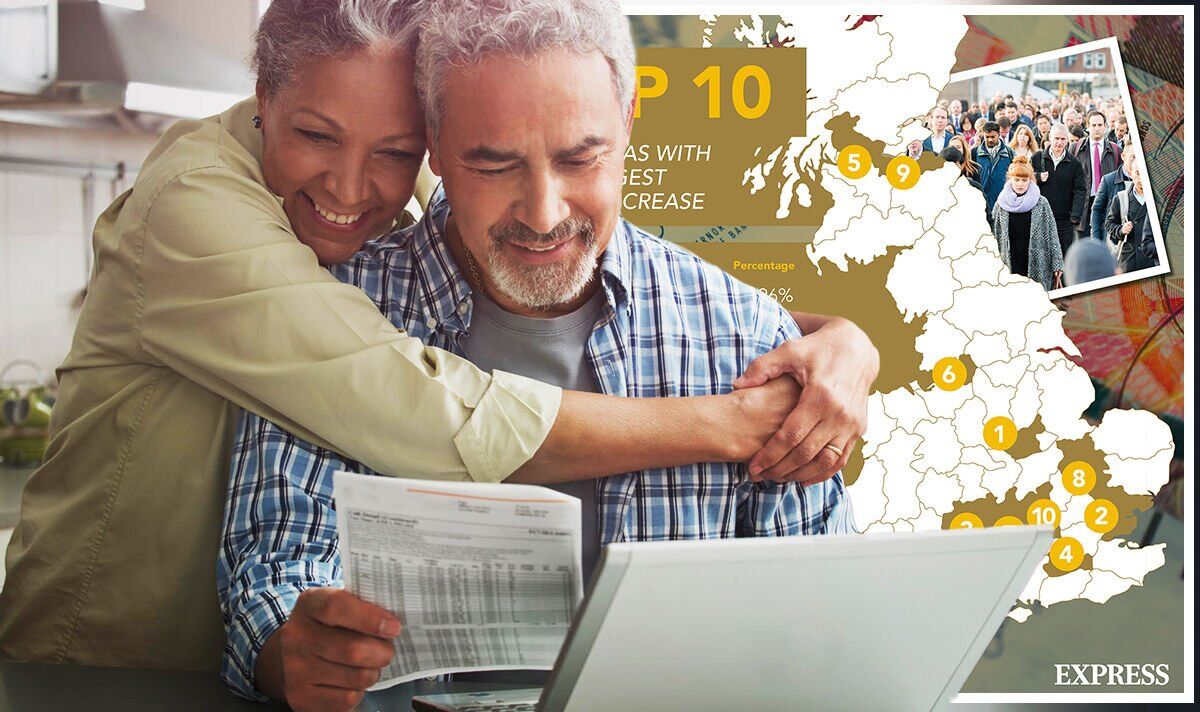 Biggest wage increases in the UK mapped: Which areas have received a salary boost?

With the cost of living crisis continuing for the foreseeable future, households are struggling to make ends meet. Strikes and industrial action have increased in recent months across multiple sectors following disputes between workers and businesses over wage rises. While many Britons feel they are missing out on a pay increase, new statistics suggest that some areas have received a significant payment boost.

Analysing data from the Office for National Statistics (ONS), financial services provider CMS Markets highlighted the hourly wage data for each local authority in the UK, minus overtime.

Express.co.uk has mapped the top ten areas in the UK with the biggest wage increases, according to the firm’s analysis.

CMS Markets’ breakdown revealed that the Leicestershire area of Melton experienced the most significant increase in wages.

In second place was Maldon in Essex which was found to have an average hourly wage of £14.67 in 2021.

The Cotswold area in Gloucestershire took third place in the top ten with workers receiving an average hourly pay of £17.81, an increase of 24.89 percent from the year before.

The London borough of Sutton came in fourth place with residents in the area receiving a pay rate increase of 23.25 percent to £16.82 compared to 2021.

Rounding out the top five areas on the map is East Dunbartonshire which has seen average wages increased by 19.35 percent in 2022 to £17.89 an hour.

This is a boon for those working in these areas as families deal with the double whammy of soaring energy bills and rampant inflation.

Michael Hewson, the CMC Markets’ chief market analyst, shared why he believes this analysis may make Britons “question” which areas they are living and working in.

He explained: “What’s fascinating to see is the huge wage growth in so many areas, and how it isn’t just tied to one area with locations across Britain making their way into the top ten.

“This wage growth is also seen outside of financial hubs and major cities, which may make people question whether the inner city pressure is worth it.”

Despite the good news for residents in these local areas, other analysis suggests that many Britons will not be so lucky in terms of their wages.

A report by PwC found that the average British worker’s pay in 2023 is forecast to drop to 2006 levels after inflation is taken into account.

Real wages, which include the impact of inflation, are estimated to fall as much as three percent in 2022 and another two percent in 2023

Recent ONS figures found that total and regular pay both fell by 2.6 percent in the three months to October.

Experts cite the disastrous impact of inflation on people’s wages, which is currently sitting at 10.7 percent.

Average earnings, outside of bonuses, were 6.4 percent higher over this period compared to 2021, according to the ONS’s data.

This represents the largest increase in wages since records began in 2001, outside of inflation, but does account for inflation.