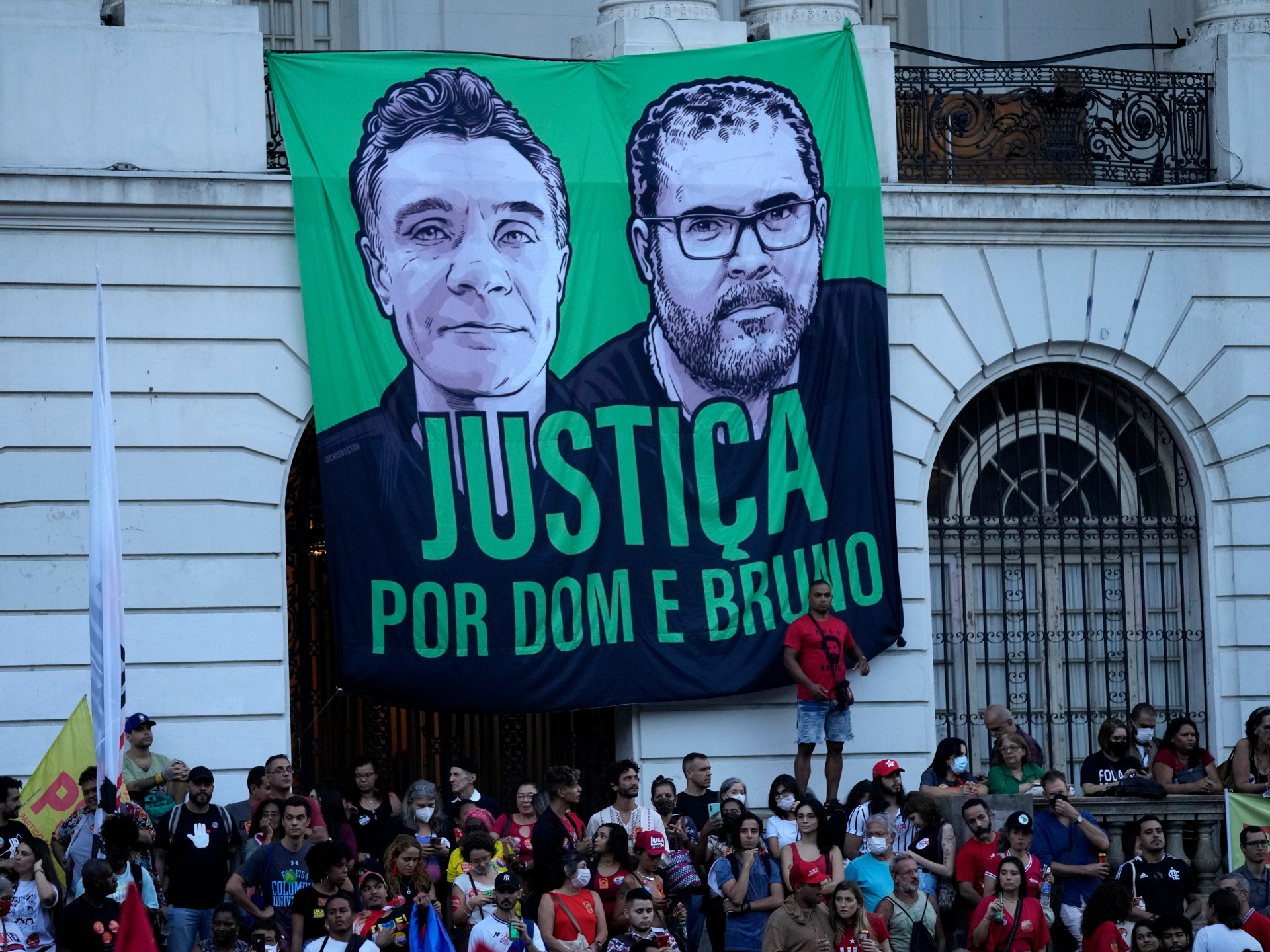 A gang leader is accused of organising the 2022 murders of Indigenous expert Bruno Pereira and journalist Dom Phillips.

Federal police in Brazil have identified a Colombian fish trader and gang leader as the mastermind behind the dual murders of British journalist Dom Phillips and Indigenous expert Bruno Pereira, a crime that drew international attention to the Amazon rainforest.

On Monday, Alexandre Fontes, the head of the federal police for the Brazilian state of Amazonas, said that his investigators had a “strong conviction” that Ruben Dario da Silva Villar was behind the June 2022 slayings.

Pereira, 41, and Phillips, 57, were last seen on June 5, 2022, when they took a boat through the Javari Valley Indigenous area on the western edge of Brazil, close to the border with Peru and Colombia.

The two men were doing research for a book on sustainability in the Amazon that Phillips, a journalist who had worked with The Guardian and the New York Times, had hoped to write. But their boat never returned.

The disappearance of the two men renewed concerns about the threats that reporters, environmentalists and Indigenous leaders receive while working in the region, where illegal miners, loggers, poachers and narcotics traffickers all compete for resources and territorial control.

After 10 days, the search for the men came to a close when a fisher named Amarildo da Costa de Oliveira confessed to killing them. He led Brazilian police to a burial site concealed about 3km (1.8 miles) in the forest.

Pereira, the Indigenous expert, had previously clashed with local fishers, particularly as an employee of Brazil’s federal agency for Indigenous affairs, FUNAI. He had received threats and was known to carry a gun for safety. After leaving FUNAI, Pereira continued to work with Brazil’s Indigenous populations, teaching local people how to monitor illegal activity and collect photographic evidence of crimes.

On the day of his and Phillips’s disappearance, Pereira was reportedly carrying evidence of criminal behaviour to authorities in the municipality of Atalaia do Norte. He had been doing inspections of illegal fishing operations in the area.

Both he and Phillips were ultimately shot to death.

Prosecutors have said that Phillips was likely killed “only because of being with Bruno [Pereira], in order to ensure impunity for the prior crime”. Three men, including the fisher Oliveira, were charged in July for their roles in the murders.

Villar — the gang leader identified by police on Monday and known by the nickname “Colombia” — is accused of running an illegal fishing network in the Amazon, one that suffered financial losses due to Pereira’s work. Police said he financed impoverished locals to illegally fish in the Javari Valley Indigenous territory.

Villar was already in police custody at the time of Monday’s announcement, as he faces additional charges for allegedly using a falsified Brazilian birth certificate, as well as fake Peruvian identity papers, to carry out illegal activities.

During a press conference in Manaus, the capital of the Amazonas state, federal police accused Villar of providing the ammunition used to kill Phillips and Pereira. Officials also said that Villar called the confessed killer both before and after the shootings and paid for his lawyer. Villar has denied the charges.

UNIVAJA, a union of Indigenous peoples in the Javari Valley that employed Pereira, said it believes there are more organisers behind the murders who have yet to be arrested.