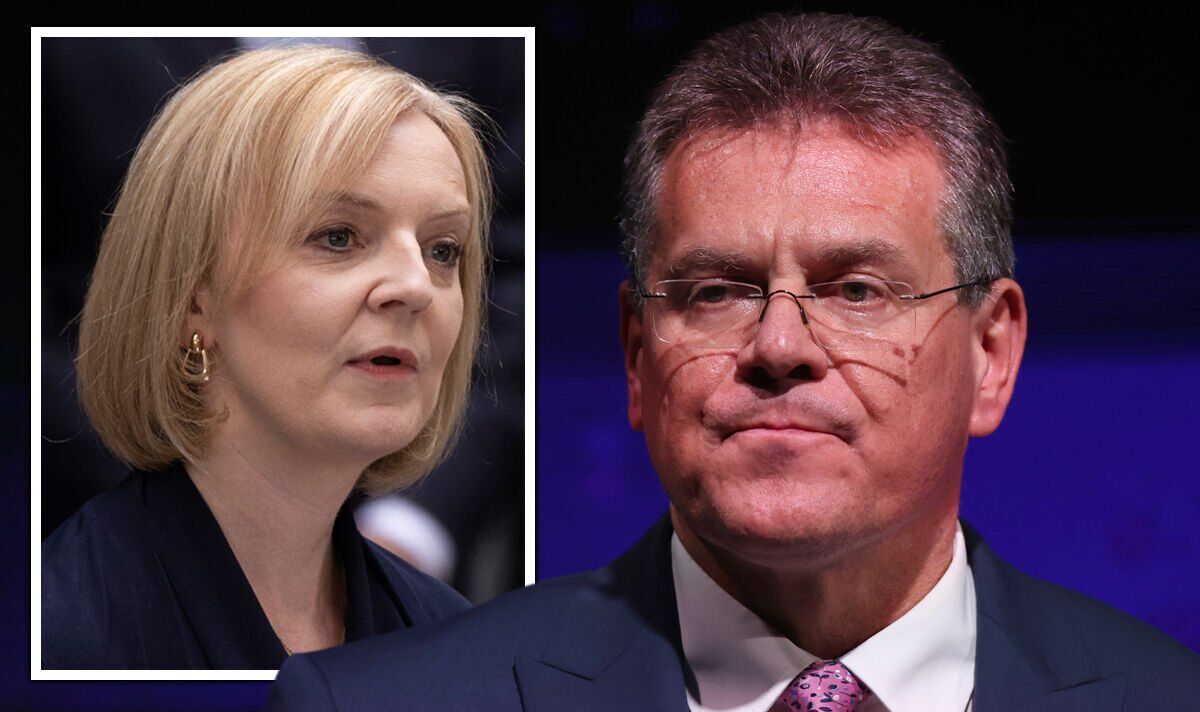 The UK and European Union will meet for the first time in several months as they desperately try to resolve the bitter row over the Northern Ireland Protocol. The breakthrough could be seen as a sign that new UK Prime Minister Liz Truss is already intent on improving what have been often strained relations over the past few years with Brussels. Britain has insisted it will press ahead with a move to override parts of the agreement governing post-Brexit trading arrangements in Northern Ireland.

But the EU has reacted furiously to this, sparking fears of a damaging trade war at a time when tens of millions of people are already struggling to make ends meet.

Talks over a breakthrough on the Protocol broke down in February, and there has been next to no activity or progress on the subject since.

Mr Cleverly said in a tweet following the call: “Good to speak to Maroš Šefčovič today on important shared issues including the Northern Ireland protocol.

“We agreed we want to look for solutions to protect the Belfast (Good Friday) agreement. We will speak again soon.”

Mr Šefčovič wrote in a separate tweet: “Both sides agree to look for solutions around the protocol, to bring predictability and certainty to people in Northern Ireland.

“The EU is committed to joint efforts. Teams will meet soon. James and I will stay in contact.”

The row over the Protocol has subsequently soured relations between the two sides, but Ms Truss has always insisted she would prefer to come to a negotiated solution with the EU.

In an interview with BBC Northern Ireland on Thursday, the Prime Minister repeated that the Government remains open to a “negotiated settlement”, but warned the situation cannot be allowed to “drift”.

Earlier this month, Ms Truss met a number of world leaders on the fringes of the UN General Assembly in her first one-on-one meetings with them since she became Prime Minister.

Ms Truss also met US President Joe Biden, who has often been critical of the UK’s move to override parts of agreement governing post-Brexit trading arrangements in Northern Ireland.

Both leaders were keen to make clear they want to ensure the Good Friday Agreement is protected as they looked to ease tensions over Britain’s position on the Protocol.

The US President told the Prime Minister ahead of their talks: “We both are committed to protecting the Good Friday Agreement in Northern Ireland.

“I’m looking forward to hearing what’s on your mind and how we can continue to cooperate.”

Ms Truss told Mr Biden: “And of course, I’m looking forward to discussing the Belfast Good Friday Agreement, and how we make sure that’s upheld into the future.”

Earlier today, it was announced the Prime Minister has agreed to meet leaders from the EU at a summit in Prague next week.

UK diplomats have said Ms Truss wants to settle the dispute with the EU before next Easter’s 25th anniversary of the Good Friday Agreement.

This could potentially lead to Mr Biden making his first state visit to London later on in 2023.