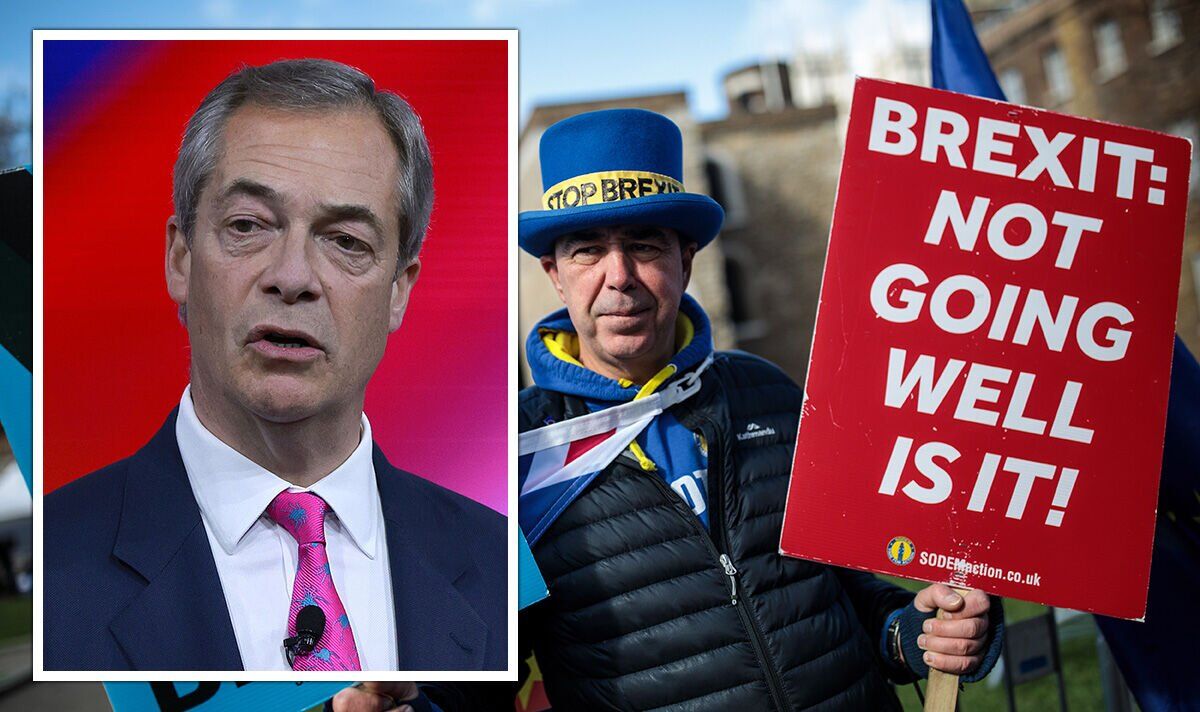 Former Brexit Party leader Nigel Farage said Brexit could be under threat as the Conservative Party was backtracking on “finishing” the UK’s exit from the European Union. The GB News presenter and Former MEP claimed that Brexit could be unravelling and he was “worried about the direction” the Tories were going in, during an episode of his YouTube Channel.

He highlighted former Chancellor George Osborne’s prediction that the UK would rejoin the EU within 20 years.

Other threats to Brexit, he said, were the UK’s migration scheme to send asylum seekers to Rwanda and the upcoming by-election in Wakefield.

As a result of his warnings, Express.co.uk asked readers their opinions on whether Brexit was unravelling.

In a poll that ran from midday on Saturday, June 18, to 4pm on Wednesday, June 22, Express.co.uk asked: “Do you think Brexit is unravelling following Nigel Farage’s warning?”

Many debated that Brexit was not unravelling but rather that it still hadn’t been completed six years after the referendum.

Mr ShaunWarbuton said: “If Brexit is unravelling it’s because it was never fully wound up, by this half-hearted Government who still have this country tied to the EU, and it’s ridiculous rules after nearly three years post Brexit vote, by the people?”

MI7 said: “17.4 million people voted for WTO Brexit, not for Northern Ireland to be left behind, time for the people’s choice to be implemented.”

Dr Evil commented: “It is not unravelling it just has not been completed. Not until the protocol is gone, nor until these boat people are stopped and returned to France or sent to Rwanda and not until all EU fishing boats are excluded from UK territorial waters.”

Despite being independent of the EU for two years Britain still faces challenges from Brexit.

In another poll that ran from 9am on Wednesday, June 15, to midday on Friday, June 17, Express.co.uk asked: “Has Brexit been a success?”

A further 34 percent (1,257 people) said “yes”, Brexit has been a success while just two percent (75 people) said they did not know either way.

But hundreds of comments were made by readers as they debated the successes of Brexit.

One reader, username Mattygroves said: “Brexit has been an unmitigated disaster.”

MShepp said: “It has not been as successful as it should have been because of the actions of a europhile government, Parliament, civil service and HoL.”

And Mermag75 said: “Boris and his Government haven’t implemented it properly.”

But Geedward said: “Our problem is the number of people blindly complaining all the time instead of getting on and with the future.

“On the trade front, we are making more deals and we are pulling in more investments than France or Germany. Our unemployment is half EU’s. It is in many ways a problem of expectancies.”

Others argued that not enough time had passed to fairly judge if Brexit was successful.

Username JL77 said: “Due to Covid it cannot be judged as a success yet but far better than being in the EU.”

Username DNeil said: “So far….yes and we have only just begun. Remove further barriers to success like Remoaners and it will be even better.”

And username Jock-the-scot said: “Give it time as we have hardly had time to put our foot on the first rung of the freedom ladder.”