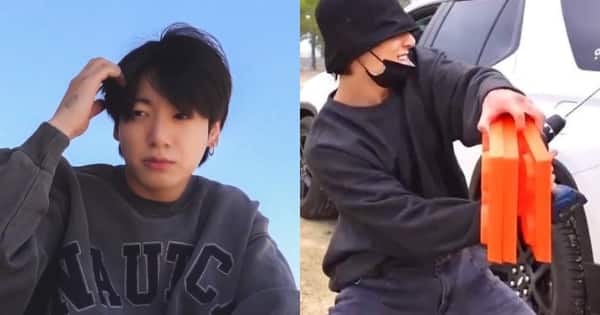 BTS: From missing Bangtan Boys together to grooving on Suga X PSY’s That That and more: Jungkook’s Vlog was a great virtual ‘camping’ experience for ARMY [Watch]

BTS members – RM, Jin, Suga, J-Hope, Jimin, Taehyung and Jungkook have shot for the Vlogs which are being dropped on Bangtan TV’s YouTube channel one by one. Out of the BTS members, RM, J-Hope, Jimin and Taehyung’s Vlogs have already been released. And today, it was Golden Maknae aka Jungkook’s turn. Jungkook went camping with his directors. He drove halfway to Goeseong (the place where BTS V and the Wooga Squad members went for In The Soop Friendcation). And there were many relatable moments from BTS’ Jungkook’s Camping vlog. Also Read – BTS ARMY edits Jungkook’s ‘Bad Decisions’ with Run BTS compilation and it’s a laughter riot [Watch Video]

The most interesting part of the camping vlog by Jungkook was how wholeheartedly he ate after saying that he doesn’t eat much. He cooked himself, meat, kimchi fried rice and also coffee. The way Jungkook savoured every bit would make your mouth watery, ARMY. Talking about relatable moments, Jungkook began the trip with clear weather but soon, it turned cloudy and started pouring. It wasn’t what they had planned but Jungkook moved ahead with it calling it an adventure. He helped the directors set up the camping van, using tools. He also performed Suga aka Min Yoongi and PSY’s That That with the tools in his hand. He fetched water in a drum and learned how to attach it to the camping van. Also Read – BTS ARMY trends ‘JUNGKOOK CAME HOME’ as he returns on Instagram to praise J-Hope’s Lollapalooza concert [View Tweets]

Jungkook being Kookie and missing members and ARMY

While shooting all by himself through the camera, Jungkook felt like a YouTuber. ARMY, he’s such a cutie. There are a lot of visuals of Jungkook that are wallpaper-worthy. This seems to be the first time that JK was shooting a vlog without the members, it seems. He missed his hyungs (RM, Jin, Suga, J-Hope, Jimin and Taehyung) and recalled him while hogging on a marshmallow. He ate a lot! He has an appetite, really. Jungkook’s reaction to aurora fire and the way he played around with it will remind you of BTS’ baby (jungkookie). He also shared the Run BTS guide version which was hilarious yet cool. Jungkook talked about deleting his posts from Instagram to make it look cooler. And YES, this is when he came LIVE on VLIVE and interacted with the ARMY. Throughout the vlog, Jungkook also expressed how much ARMYs mean to him. His emotional side will leave you wrecked, ARMY. In the end, his gesture for BTS and ARMY will melt your hearts. Check out the video here: Also Read – BTS: J-Hope’s emotional moment at Lollapalooza moves Armaan Malik; fans thank him for the shout-out

Meanwhile, on the work front, Jungkook collaborated with Charlie Puth for Left and Right. It was his solo collaboration. He recently collaborated with Benny Blanco and Snoop Dogg alongside other members – Jin, Jimin and Taehyung for Bad Decisions. Let’s see what more, the Golden Maknae of BTS – Jungkook has in store next.