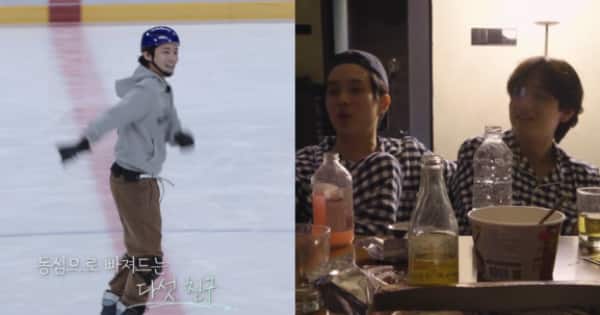 In The Soop Friendcation last episode

In the last episode of In The Soop Friendcation featuring Taehyung, Peakboy, Wooshik, Seojoon and Hyungsik, we will see the boys making most of their last night in Goseong. They will finally go to the ice skating rink together. BTS V aka Kim Taehyung will flaunt his balance act. Well, it seems he has gotten better after the Dynamite roller-skating video. Seojoon seems to enjoy skating on the rink too. Late in the night, the boys decide not to sleep. They sit down in a corner and talk till dawn. It seems In The Soop Friendcation will come to an end with drinks, food and lots of meaningful conversation. There would come a moment when Taehyung, Hyunsik, Wooshik, Seojoon and Peakboy will talk about when they can go together for such a trip again. Also Read – BTS: Kim Taehyung’s desi fan imagines him as son-in-law of an Indian home in this hilarious edit that will leave you ROFL [Watch Video]

The Wooga Squad’s bond will tug at your heartstrings. It will remind you of your BFFs/ Squad and make them miss harder. The boys – Seojoon, Wooshik, Peakboy, Hyungsik and Kim Taehyung will enjoy a scrumptious meal cooked by them all. Their conversations will be filled with laughter and emotions and it’ll bring a smile to your face, ARMY. Watch the video here: Also Read – Trending Hollywood News Today: Priyanka Chopra-Nick Jonas to reveal Malti’s face on this date, Dolph Lundgren breaks silence on betraying Sylvester Stallone and more

Well, it is being said that BTS is on a hiatus but in reality, the boys – RM, Jin, Suga, J-Hope, Jimin, V and Jungkook, are dropping a lot of content solo and some with units. ARMY is quite busy watching BTS rule hearts in the pop world. As far as BTS group activity is concerned, Run BTS is beginning from 16 August, every Tuesday again.