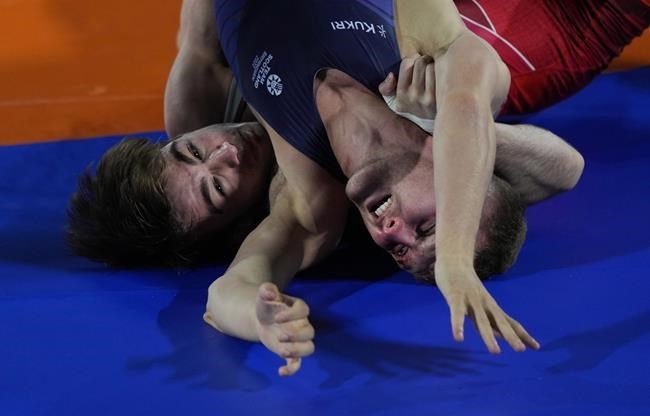 BIRMINGHAM, United Kingdom — Canada’s divers and wrestlers have added eight more medals to its tally at the Commonwealth Games.

Diver Mia Vallee of Beaconsfield, Que., who won gold in the women’s one-metre springboard, and freestyle wrestler Amar Dhesi of Surrey, B.C., who struck gold on the mat, had Canada’s best results on Friday.

Vallee said that the key to her victory was ignoring the impressive field and focusing on her own performance.

“I think I’ve learned throughout the past year to really put (my competition) aside and just mostly dive for myself,” said Vallee. “I think that’s the best way I can put it. In competition that allows me to focus on myself and try and do my best.”

Synchronized divers Nathan Zsombor-Murray of Montreal and Rylan Wiens of Calgary added a silver in the men’s 10-metre event.

Dhesi won his gold with a decisive 9-2 win over Pakistan’s Zaman Anwar in the men’s 125-kilogram final.

Godinez-Gonzalez dropped a 4-4 decision to India’s Sakshi Malik in the final of the women’s freestyle 62-kilogram final.

Morais settled for silver after losing to Nigeria’s Blessing Oborududu 5-1 in the women’s 68-kilogram final.

Moore earned his bronze with a convincing 10-0 win over New Zealand’s Matthew Oxenham in the bronze-medal match of the men’s 86-kilogram event.

Wiens and Zsombor-Murray earned 413.85 points in the 10-metre synchro event behind England’s Matthew Lee and Noah Oliver Williams (429.78) but ahead of Australia’s Domonic Paul William Bedggood and Cassiel Emmanuel Rousseau (412.56).