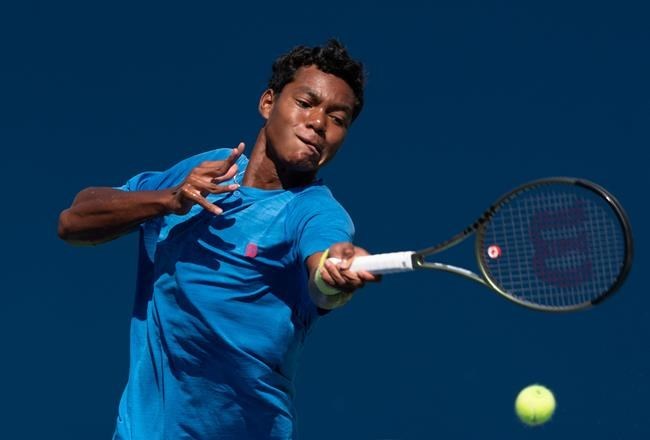 MONTREAL — It was just a few short years ago that Jaden Weekes was at IGA Stadium as a fan with dreams of one day playing on the ATP Tour circuit.

On Saturday, the 17-year-old Montreal native took the next step in his tennis journey by making his National Bank Open debut — on centre court no less — as a wild-card entry in the qualifying draw.

Weekes held his own against Germany’s Daniel Altmaier before dropping a 6-3, 6-4 decision in one hour 27 minutes.

“I mean it’s surreal … it was the first time I (experienced) an atmosphere like this,” Weekes said. “I was very happy and I was just enjoying the moment.”

Currently ranked 21st in the ITF junior rankings, Weekes was among six Canadians in the 28-man qualifying draw at the ATP Tour event.

Proudly calling himself a serve-and-volleyer — his father used to show him old John McEnroe tapes of the technique — Weekes covered a lot of court in hot, sunny conditions in front of a few hundred fans.

“I train here and I come to this tournament every year,” he said. “So it means the world to me to be playing in it.”

Altmaier, the world No. 79, punished the Canadian teen in the opening game with three service winners as he held at love. Weekes answered with four straight points of his own but the German earned a service break on his next opportunity.

Weekes admitted he battled some nerves throughout the match, perhaps leading to more unforced errors than usual. He was still all smiles afterward as he gained valuable experience at a Masters 1000 competition.

Next up is a junior warm-up tournament ahead of the US Open boys’ event in a few weeks in New York.

“From there, we’re switching to the big leagues,” he said with a laugh.

Weekes plans to turn professional once he ages out of the junior ranks. He will keep a university path open as a backup option.

A resident of nearby LaSalle, Que., Weekes said his parents used to play tennis for fun and they introduced the sport to his older brother years ago.

Weekes eventually picked up a racket too and quickly became hooked. He watched the pros as a young boy when they came through town in the summer.

He remains a fan and is most excited to see another local favourite — sixth-seeded Felix Auger-Aliassime — on court over the coming days.

“Ever since a young age I’ve always looked up to him,” Weekes said. “He took the same path that I’m taking right now to become where he is now.”

Denis Shapovalov of Richmond Hill, Ont., is also in the field along with wild-card entries Vasek Pospisil of Vernon, B.C., and Alexis Galarneau of Laval, Que.

The National Bank Open returns to full capacity this year for the first time since 2019. Top seed and defending champion Daniil Medvedev of Russia headlines a field that includes 41 of the top 44 players in the world rankings.

Play continues at the US$6.57-million tournament through Aug. 14.