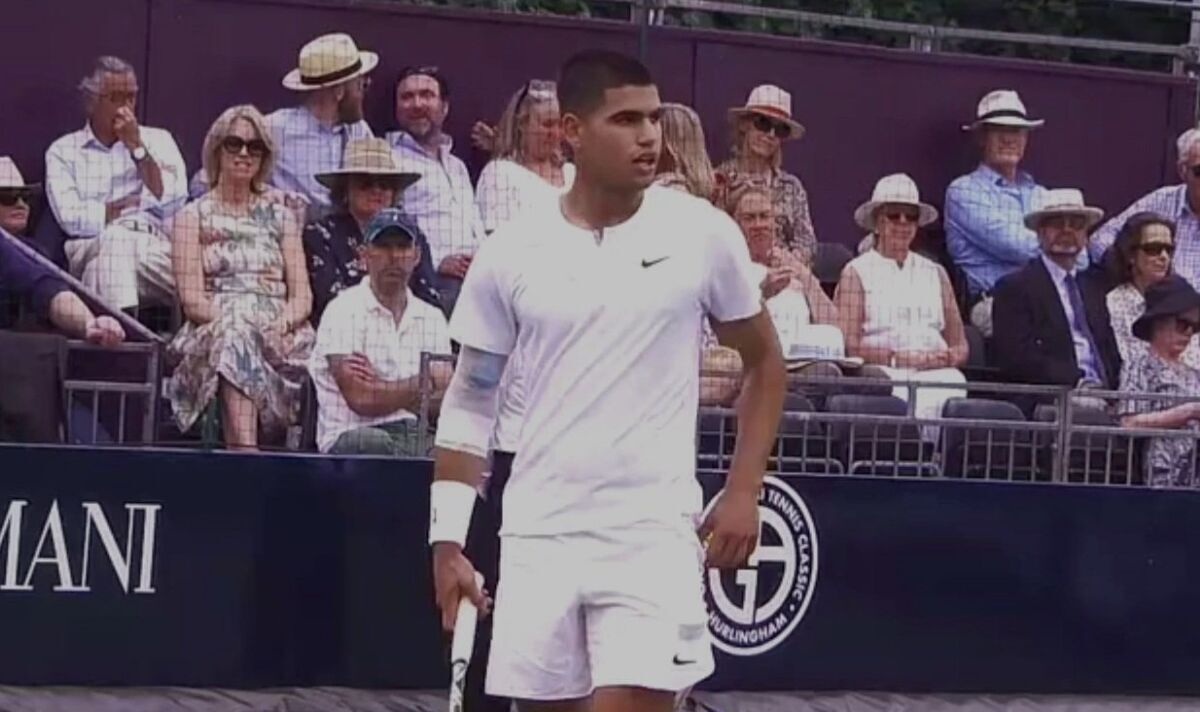 Carlos Alcaraz has insisted that he is confident of being fit for Wimbledon despite sporting heavy strapping on his elbow in an exhibition match on Thursday. The 19-year-old Spanish sensation has taken tennis by storm this year, winning the Miami and Madrid Opens to lead to suggestions that he could be the long-term heir to Rafael Nadal’s throne.

He is less familiar with grass, however, and lost in straight sets by Daniil Medvedev in the second round of his Wimbledon debut last year. Alcaraz also tasted defeat in his warm-up match against American Frances Tiafoe in an entertaining and competitive encounter as he was beaten 6-4 6-2 at the Giorgio Armani Tennis Classic at the Hurlingham Club.

Supporters may have been left worried by the strapping on his elbow, but speaking to reporters after the encounter Alcaraz claimed it was nothing too serious.

“Well, it was just for precaution,” he said. “A couple of weeks ago I had problems where I couldn’t train well. I trained without pain at Wimbledon and I felt good today. I had fun out there and I have more training ahead and another match on Saturday here.

“A few weeks ago I couldn’t give it my all in training, and I have come here not knowing how I would be. But I’ve been feeling well, without any pain, so I hope to keep improving and that everything will be ok.”

Alcaraz clearly enjoyed his experience in the west London sunshine by the Thames, but played down his chances of success at SW19 this year. “It was amazing,” he continued. “The crowd were great and I hope they had fun watching the match. I said before that this is probably the best club I’ve ever been to so it’s been great to be around these people.

“Learning how to move on the grass is very important and it’s the key to be able to get good results. We’re trying to improve the mobility and small details such as volleying.

“I don’t mind being in the background, without pressure. Some people are calling me one of the favourites for Wimbledon but honestly, I don’t think so. There are plenty of players who are much better than me on grass at the moment such as Novak Djokovic, Nadal and Matteo Berrettini, who are playing incredibly. But we are going to try to enjoy the grass, not just now but in the future.”

Alcaraz was recently spotted out and about enjoying the London nightlife as he dined with Tottenham left-back Sergio Reguilon. But when asked by Express Sport if he is now a Spurs fan as a result, he was non-committal to say the least in his response.

“Sergio is an old friend of mine and he told me he’s going to watch my matches at Wimbledon so he’s a good supporter,” he laughed. “But Real Madrid is still my main team.”