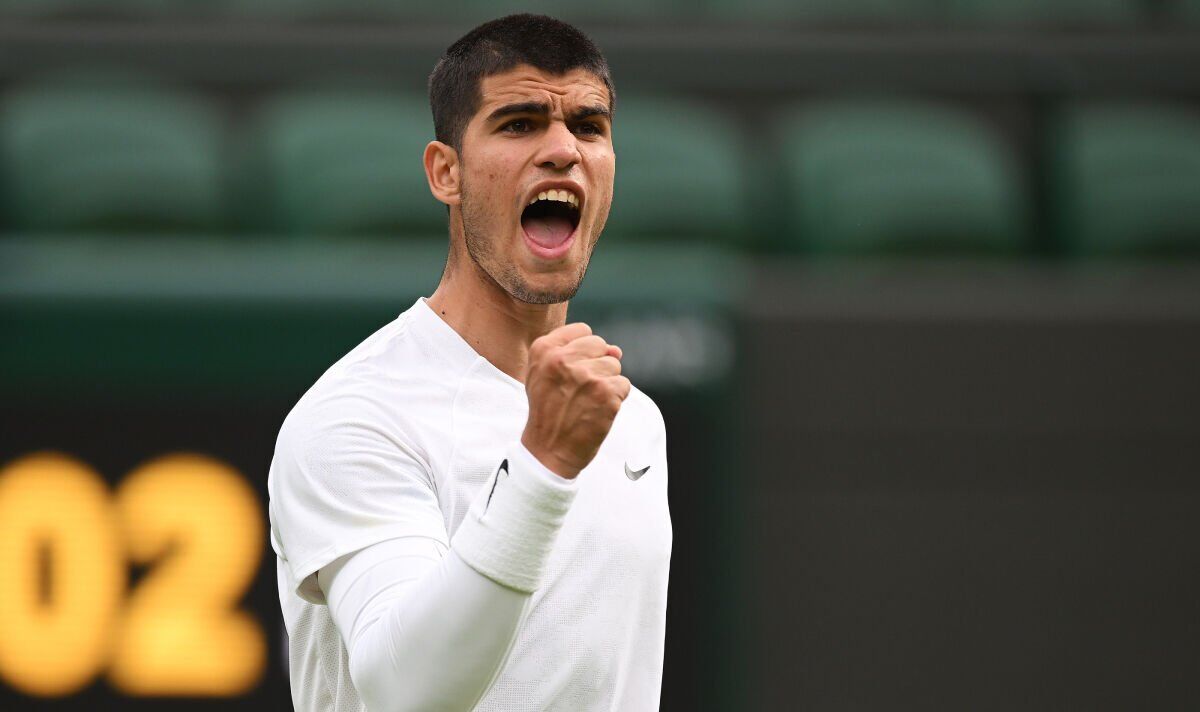 Carlos Alcaraz is through to the second round of Wimbledon after beating Jan-Lennard Struff in five pulsating sets. Like one of his title rivals, Novak Djokovic, Alcaraz had to overcome a big scare to keep his Wimbledon dream alive and eventually saw off the stubborn Struff 6-4 5-7 6-4 6-7 4-6 after a four-hour-and-14-minute marathon.

Alcaraz initially came firing out of the blocks, taking the first game with minimal fuss but was then forced to reset as Struff took the next three games. The young Spaniard’s troubles on serve continued into the fifth but he dug his heels in to make it 3-2 after a lengthy deuce.

If there were any pre-emptions that Struff was going to be overawed by the talented teen before this, that certainly didn’t look like it was going to be the case as the German held the next two games on his serve to close out the first set 6-4. Alcaraz, it seemed, was going to be in for a long afternoon.

Struff continued to ask questions and cause problems in the second but there was a sense the momentum was just shifting in Alcaraz’s favour as the Spaniard started to dominate on his serve. But Struff was answering in turn, winning all of his serves in the first eight games to make it 4-4.

But the German’s resistance was eventually broken as Alcaraz began to turn the screw late in the set and ended up taking it 7-5 to tie things up.

Alcaraz again held his serve at the start of the fourth and forced deuce on Struff’s but couldn’t capatilise as the German pulled off a deft shot at the net to hold on. Alcaraz responded by winning on his serve and, as per, Struff then did too in kind.

That theme continued until the sixth game when Alcaraz threatened to break, reading Struff’s drop shot and whipping it across the court to take it to deuce. The Spaniard let out a scream as he looked to take the game to Stuff.

Again though, the determined German kept his cool and held on for 3-3. The Spaniard then found himself in a bit of a hole at 30-15 on his serve but managed to edge out his opponent in a short rally before hitting two unstoppable serves to take a lead.

Alcaraz then delighted the crowd with a perfectly-executed chip at deuce but – in-keeping with this match – his advantage was cruelly taken away as quickly as it was won as Struff hit an ace. The German, however, then made two unforced errors, double-faulting to give the Spaniard another opportunity. Of course, what happened next was no surprise. A brilliant serve and volley to take it back to deuce.

Alcaraz screamed with joy when he forced an error from his opponent next. He needn’t have bothered. Struff brought it back to deuce for a fourth time.

Amazingly, we went to deuce for a seventh time before Stuff finally served out the game. Alcaraz, for all the effort and grit, was denied once again.

At just 19, Alcaraz belied his years and showed no signs that the frustration was getting to him, taking the next game to keep his Wimbledon hopes alive and the piling the pressure back on Struff. The roar from the crowd made it clear who they were rooting for.

That didn’t bother Struff though, as the 32-year-old remained focused on the task at hand and done what he’d been doing pretty much all game, winning on his serve. But Alcaraz was not going anywhere quietly and won four points in a row to take a 6-5 lead.

Again, Struff met any pressure head-on and served out to take it into a tie-breaker. He quickly raced into a 2-0 lead but Alcaraz somehow squeezed out a backhand winner to half the deficit before taking a 4-3 lead as the tensions ramped up.

Alcaraz, to the delight of the crowd, then forced two errors from Struff to extend his advantage to 6-3 before hitting a stunning forehand to take it into a decider.

Both men held well on their serve again but Alcaraz got an all-important break at 4-4 before closing the set 6-4 to progress.

Alcaraz won’t want too many more of these types of games, but just like a true champion, when the going got tough, he fought fire with fire and dug deep to prevail.