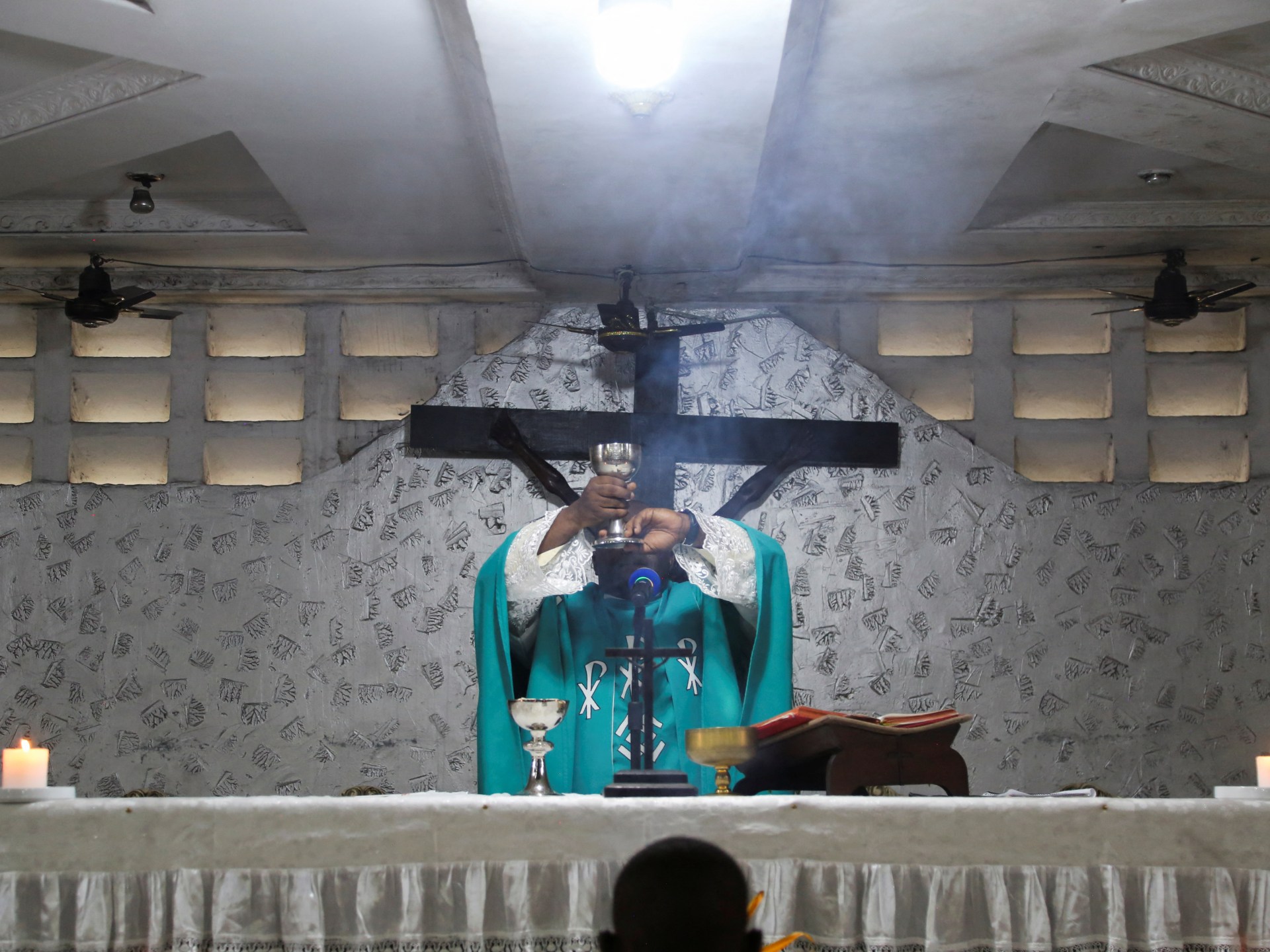 Halfway through his homily, Father Victor Ntambwe brandished his voter card in front of the congregation at St Charles Lwanga Church in Kinshasa, capital of the Democratic Republic of the Congo (DRC).

With presidential elections just months away, he had an earthly message to deliver alongside the psalms and the sermon. He told the worshippers to follow his lead, hold up their cards and show they had registered.

“If we do not register to vote, we will have the authorities we deserve, but if we enlist and vote, we can hold them to account,” he told the Reuters news agency after Sunday’s service.

The Catholic Church has a long history of promoting democracy in the vast African country where organising elections has been complicated by financial and logistical problems, and disputes over vote tampering have frequently caused widespread unrest.

Once again, the church is gearing up to monitor elections scheduled for December, in which President Felix Tshisekedi will seek a second term in office.

Preparations are under way just as the DRC – home to 45 million Catholics, the most of any African country – prepares for the arrival next week of Pope Francis, its first papal visit since 1985.

In the decades since, the DRC, whose vast mineral wealth has attracted investment from some of the world’s largest companies, has been swept up in a myriad of simmering conflicts that have killed millions of people.

During this chaos, the Catholic Church deployed thousands of observers across the country before and during voting. Sometimes, as was the case in the 2018 polls, its tallies – trusted by millions – have differed with official results, raising concerns of fraud.

“The church has a duty to denounce what is wrong with society,” Ntambwe said.

Across the country, the Catholic Church is already in election mode. Abbots in Kinshasa are encouraging congregants to participate. The church has put up banners in the streets urging people to enrol.

This year, for the first time, the National Episcopal Conference of Congo (CENCO) has partnered with the Church of Christ of Congo (ECC), a union of 64 Protestant and evangelical denominations.

In a classroom at the Commercial Technical Institute in Kinshasa’s Ngaliema district, dozens of people filled out voter registration forms last week. It was a long wait and some had to come back a second day to register.

“The machines regularly have problems,” said one man who had been waiting all day.

Equipped with a book and a cap with the CENCO logo, Nancy Makola took notes. She is one of 600 accredited observers overseeing the registration process, a number that will likely swell into the tens of thousands when voting gets under way in December.

“I am the eyes to observe and the mouth to make remarks,” said Makola, a journalist by training.

Makola has visited 15 registration centres over the past month. She has concerns. The police denied her access when she returned to some centres, she said.

Machine malfunctions have been common, Makola said, a detail she later reported to CENCO at its headquarters.

Based on this and more than 1,500 other observer reports, CENCO and the ECC on Thursday recommended that the election commission extend the registration deadline.

The commission acknowledged that some registration centres were not functioning properly, without elaborating. It extended the deadline on Sunday by 25 days until February 17.

For Reverend Nsenga Nshimba, the secretary general of the ECC, observations made during the first phase of registrations will prevent problems elsewhere.

“In order not to have a slip, we must learn the lessons of this first area,” he said.