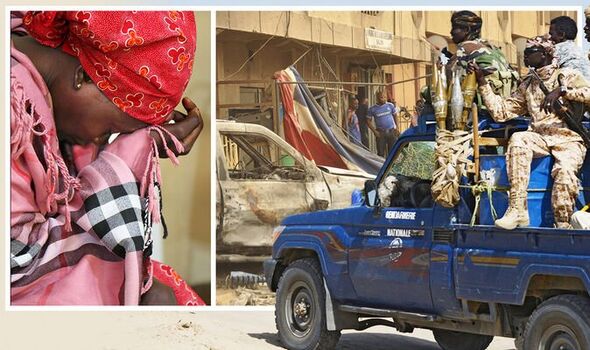 Who are Boko Haram?

And the problem is being exacerbated by a reluctance to accept the religious nature of the violence, both within the country itself and in the UK in terms of its response to the worsening situation, experts have warned. The report by the Observatory for Religious Freedom in Africa (ORFA) says the number Christians killed was 9.6 times higher than the number of Muslims in jihadism-related violence per capita between Oct 2019 and Sept 2020. The following year (October 2020 – September 2021) the ratio was 7.8 times.

Additionally, Christians were 59 times more likely to be abducted than Muslims by extremists, including those of terrorist organisation Boko Haram, between 2019 and 2020 per capita, with the number dropping to 4.1 times more between 2020 and 2021.

The new figures show that deadly attacks are climbing steeply for both religious groups, with a 20 per cent increase between the reporting periods of 2020 and 2021.

Dr David Landrum, director of advocacy at Open Doors UK and Ireland, told Express.co.uk: “Christians are being disproportionately targeted because they are Christians. The ratio is amplified further by the fact that, in the north and central belt where most of the attacks are carried out, Christians are in a minority – with Muslims a significant majority.

“This makes the comparative analysis of less attacks on Muslims and others starker and confirms the religious nature of the violence.”

Christians in Nigeria have been targeted by groups including Boko Haram (Image: GETTY/ORFA)

More than 300 Nigerian schoolboys were released last year after being abducted by Boko Haram (Image: GETTY)

He added: “Within Nigeria, the reluctance to acknowledge the religious nature of the violence is attributable to that fact that many key figures in the national and federal authorities in Nigeria are Islamist.

In the UK, the official denial of religion as a driver can be attributed to a range of factors, he explained, specifically protecting UK trade interests (including oil), protecting UK strategic military interests, what he called “religious illiteracy among government officials”, secularism, and a “culture of antipathy to religion” among government official, and fear of Islamist violence.

As for possible solutions, Dr Landrum said: “If you do what you’ve always done – you will get what you’ve always got. The problem of religiously motivated attacks by Islamist extremists on Christians (and also on moderate Muslims) will continue to grow as a problem unless the religious driver is acknowledged.

A burnt crucifix destroyed after an attack by Fulani herdsmen in Nigeria (Image: GETTY)

“The surging violence proves that present policy is not only failing, by denying the religious motivation for the violence it is also an exacerbating factor.

“Instead of listing the complexity of the range of factors driving violence in Nigeria, the UK government needs to accept the overwhelming evidence that religion is the core driver, and that Islamist groups are actively involved in fuelling the criminal and tribal conflicts as part of a wider strategy of ‘Talibanisation’ in which chaos and insecurity force Christians from their land.”

Gideon Para-Mallam, is the Director of Research at the Observatory of Religious Freedom in Africa (ORFA).

He told Express.co.uk: “Historically, there has and still remains a pattern of systemic persecution against Christians which became structural during the British Colonial era through the Indirect Rule system they introduced.

“This was sustained politically after the independence – post colonial era. Successive military interventions did little to stop this as Muslims continued to find ways to influence Nigeria’s military rulers to promote Islamic dominance.”

He added: “There is need for proper planning on the part of government in administering justice, which is critical. Equity and fairness could go a long way in addressing the present religiouslymotivated killings. Ending the killings would be a way arresting Nigeria’s gradual descentinto anarchy.

“What is happening politically will play out to be a real existential threat forChristians. We should not wait until it happens before crying out. The British Government and Western democracies who believe in participatory democracies and inclusive governance should not sit on the fence.”

Emphasising the need to avoid characterising the situation as a Muslims versus Christians conflict, Mr Para-Mallam said: “Thankfully, I am involved in peacebuilding work especially in promoting peaceful co-existence between Christians and Muslims in Nigeria.

“Most of Nigerians: Christians and Muslims prefer to live peace as they had lived in the past but some actions from the government in the past and present have created much tension which is worsening by the day. Nigeria government needs to stop stoking the flames or religion and ethnicity.”

In a message to the incoming UK Prime Minister – either Foreign Secretary Liz Truss or former Chancellor Rishi Sunak – Mr Para-Mallam said: “The UK Government needs to leverage on her relationship with Nigeria which is historical by getting the Nigerian government to provide justice for all Nigerians and act squarely to end the violence.

“Britain should respect the wishes of the people above the lies and manipulation of the present government and subsequent government who seek to maintain the status quo by pursuing corrupt and selfish personal agendas above the common good of the people. The British government hobnobs too much with corrupt leaders not just in Nigeria but Africa. This needs to end.

“What Britain would not do to their citizens, they should not encourage the government of Nigeria to do to Nigerian citizens. Diplomacy is good but its poisonous if corruption persists and for Britain it remains business as usual with Nigeria.

Liz Truss or Rishi Sunak will be Britain’s next Prime Minister (Image: GETTY)

He also emphasised the ongoing violence had implications for Britain if it continued unchecked.

He explained: “The UK government needs to consider her economic interests’ side by side with the suffering populace in Nigeria. Britain should not be selfish.

“In actual fact, it is in the economic and political interest of the UK government to think futuristically about Nigeria.

“Why am I asking for this? If Nigeria collapses today, Britain will be hardest hit with economic refugees. Our colonial history means the UK government will not escape this reality.”

Speaking in the Commons on July 19, Parliamentary Under-Secretary of State for Africa, Latin America and the Caribbean Vicky Ford said:” Government are committed to maintaining a strong partnership with Nigeria – one that furthers the links between our people and that delivers our economic, security and development objectives.

“As Members here in Westminster Hall today have so correctly pointed out, rising insecurity in Nigeria is a very significant concern and the country faces multiple and complex challenges, from terrorism in the north-east to intercommunal conflicts and criminal banditry in the north-west and middle belt, violence in the south-east and south-west, as well as much serious and organised crime.”

An FCDO spokesman told Express.co.uk: “We agree that jihadist ideology is a driver of violent extremism in Nigeria, and that Christians and other groups who do not agree with their extremist ideologies are victims of this violence. The UK is committed to helping Nigeria tackle this threat.”

Attacks on Christians in Nigeria in recent years, according to ORFA: