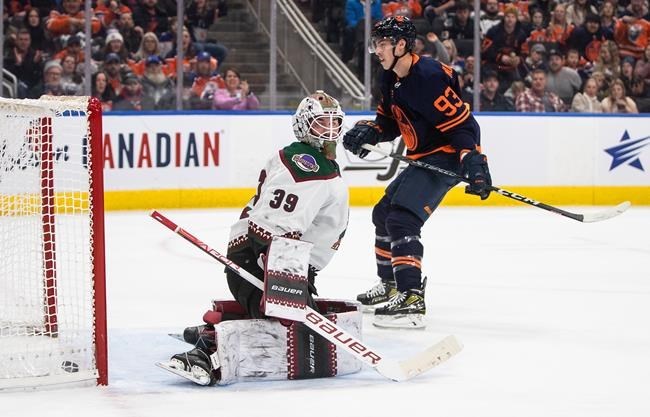 EDMONTON — The Edmonton Oilers finally put together a complete game on Wednesday, even if it was against a team running on fumes.

Connor McDavid had two goals and two assists and Ryan Nugent-Hopkins scored twice and had an assist as the Oilers defeated the road-weary Arizona Coyotes 8-2. The rout came two days after Edmonton allowed 50 shots in a 3-2 loss to the injury-riddled Washington Capitals.

“We wanted to have a good rebound off last game, that was kind of the mindset coming in,” said Nugent-Hopkins. “Everybody was involved, everybody was involved offensively. I thought we were pretty solid defensively for the most part and when we weren’t (goalie Stuart Skinner) was there to back us up.”

Derek Ryan, Leon Draisaitl, Bret Kulak and Klim Kostin also scored for the Oilers (15-12-0), who have won five of their last seven games.

“It was important for us to come out and have a full 60, especially that third period (where) we were up a little bit,” Ryan said. “We played a mature, professional period where we didn’t let our feet off the gas. We stepped on it and kept playing.”

Jack McBain and Shayne Gostisbehere responded for the Coyotes (7-13-4), who finished off an epic 14-game road trip with their sixth consecutive loss.

“We didn’t fight like we usually fight,” said Coyotes coach Andre Tourigny. “Right from the beginning there was that softness, where we had three grade-A chances and missed the net all three times. We knew we had a tough opponent and we needed to be much better.

“Against professionals, a night like (tonight) will happen. We just have to make sure it doesn’t happen too often.”

The Oilers got off to a good start with a power-play goal just 4:37 into the opening period as Nugent-Hopkins sent a wrist shot through a screen that beat Coyotes netminder Connor Ingram.

Edmonton added to its lead with 3:19 minutes remaining in the first frame as Ryan shrugged off a defender and scored on a backhand shot.

The power play clicked again for the Oilers 8:14 into the second period as McDavid sent it through to Draisaitl and he scored from a tight angle for his 18th goal of the season. McDavid recorded his 50th point in his 27th game of the season, the fastest Oiler to hit that mark since Wayne Gretzky in 1987-’88.

Arizona got on the board with 6:17 to play in the second period. McBain made a nice move in tight to deposit it past an outstretched Stuart Skinner in the Oilers net.

Edmonton got that goal back just 23 seconds later, however, as Kailer Yamamoto stole a puck at the Arizona blue line and sent Nugent-Hopkins in alone for his second of the night and 13th of the season.

The Oilers went up 5-1 with 1:21 to play in the second as Kulak blistered a shot high to the glove side that went off the bar and in.

The Oilers kept the pressure on in the third period as Ryan stripped a puck that went to Kostin in front and he deposited his second goal of the season past Ingram at 3:19.

McDavid extended his goal streak to six games a couple minutes later, taking a pretty pass from Draisaitl behind the net before scoring on the wraparound.

The Oilers captain made it a four-point game with seven minutes left in the third, as McDavid took a feed from Hyman and scored on a one-timer for his 24th goal of the season.

Arizona scored with just over five minutes to play as Gostisbehere tipped in a Christian Fischer shot.

Kostin fought Zack Kassian in the final minute, giving him the “Gordie Howe Hat Trick” on the night with a fight, goal and an assist.

“It hasn’t all come together as quick as we wanted to in this young part of our season, but I do believe that we’re getting better — specifically in this last stretch,” said Oilers head coach Jay Woodcroft.

The Coyotes’ 14-game road trip started on Nov. 5, lasted 33 days, and tied an NHL record for the longest in history with the Vancouver Canucks. Arizona started the trip with three wins before going 1-7-3 after that.

Scoring first has been a challenge for both teams this season, as they came into the game having each allowed the first goal 15 times. Edmonton had managed to overcome the deficit more successfully with a record of 6-9-0, while Arizona was 2-11-2 in those situations.

Both teams play next on Friday night. The Coyotes finally return to Arizona to host the Boston Bruins. The Oilers close out a four-game homestand against the Minnesota Wild.

This report by The Canadian Press was first published Dec. 7, 2022.