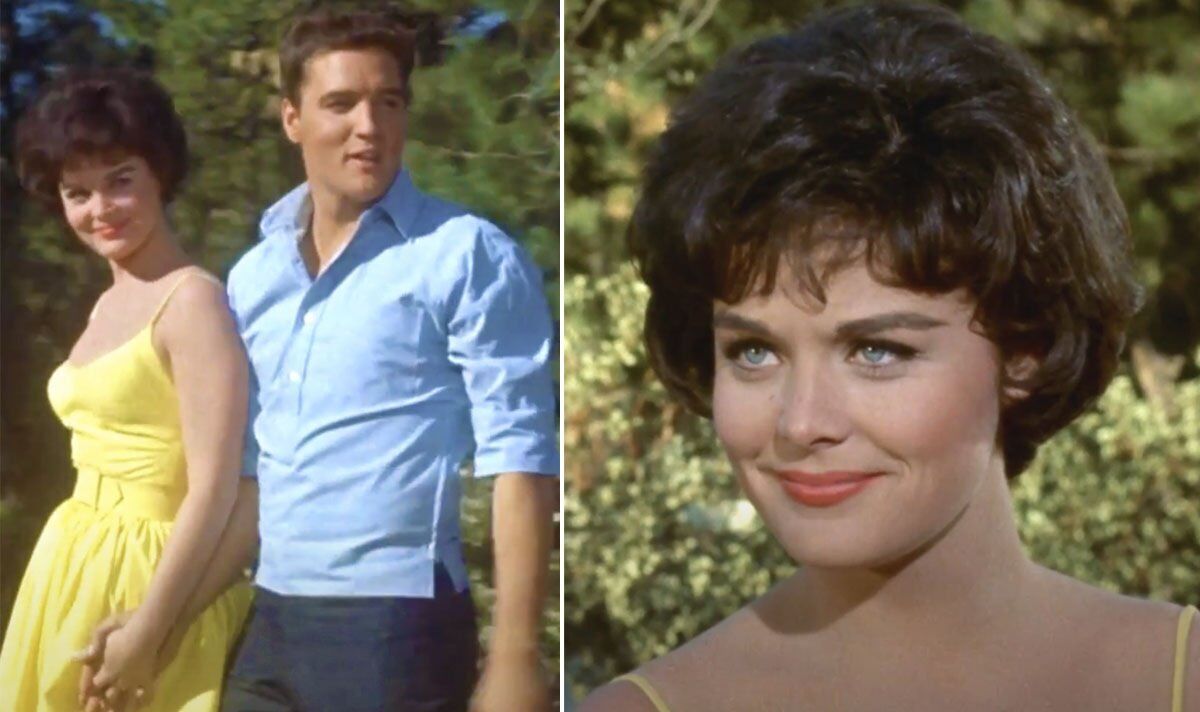 Joan claimed that before Elvis even met Priscilla, he had already fallen for her. The actress said they met well before The King left for his 18-month US army military service stint in Germany, on September 22, 1958. Joan said: “When we first set eyes on each other, there was a spark, a magic in the air… There was just that special something between us, sometimes so warm and wonderful you could almost reach out and touch it.” SCROLL DOWN TO WATCH A CLIP FROM THEIR FILM KID GALAHAD WHERE ELVIS SINGS TO JOAN AND DOES THE TWIST

According to Joan, a “besotted” Elvis was obsessed with getting her to star with him on-screen. Many commentators since have pointed out how much Priscilla looked like Joan.

The King left Priscilla (who was still only 15 at the time) behind in Germany on March 3, 1960 and was discharged from his military service on March 5. He was still determined to reconnect with Joan, promising to help her Hollywood career but she initially refused.

The actress, who had already starred with Dean Martin in 1959’s Career and with Jerry Lewis the following year in Visit To A Small Planet, later said: “I wanted parts because of my ability, not because I was dating Elvis.”

However, they soon found themselves starring together twice within one year, their chemistry palpable on and off the screen.

Joan was cast as local island girl Maile Duval in Elvis’ second film after returning to the US, Blue Hawaii. Life imitated art as the singer played a GI returning home from the army. Hollywood legend Angela Landsbury played his mother.

In a sensational 1977 interview, Joan later described how the long-standing attraction with The King ignited on set.

While Priscilla waited anxiously overseas, Blue Hawaii started filming on the tropical island in March 1961 and Elvis wasted no time getting close to his co-star.

Joan said: “We had rooms next to each other in the hotel, and for weeks we just lived together. He really wanted me as his wife.”

Elvis was actually still officially dating his 1950’s sweetheart, Anita Wood, but she had grown tired of all the rumours about his on-set conquests, as well as reports of a new girlfriend in Germany.

Anita ended their relationship in 1962, mainly over Priscilla, at the same time as Elvis conveniently found himself filming a second feature with Joan, this time in California.

Kid Galahad was a remake of the 1937 film of the same name starring Humphrey Bogart and Bette Davis. Joan played Rose Grogan, the sister of a slippery boxing promoter who spots potential in Elvis’ character, Walter Gulick, an amiable small-town wannabe mechanic.

In the film, as always, Elvis gets the girl but off-screen he had failed to persuade Joan to stay with him.

Joan had been unhappily married to actor, Joby Baker from May 1959 to November 1961, during her first entanglement with Elvis on the set of Blue Hawaii, but they had divorced in November 1961

She later told the Midnight Globe: “I was in love with another actor, Hampton Fancher III. Elvis knew about it. When he would ask me about Hampton, I would answer, ‘I love him, El. I love him like a woman loves a man she wants to share her life with.’

“I never lied to Elvis about Hampton, or about anything else.”

Meanwhile, things were getting more serious with Priscilla and Anita was out of the way.

Kid Galahad was first released on August 1, 1962. By then Priscilla has made her first visit to stay with Elvis, arriving on June 17. He had made his choice.

Joan’s relationship with Hampton did not last. She married another actor Rockne Tarkington from 1968-1970 and they had two children.

Her acting career fizzled out after the mid 1970’s, with her last notable role in the 1975 James Mitchum vehicle Moonrunners. In 1990 she made one last return to the small screen in the TV series The Castle of Adventure, based on the Enid Blyton book.  The show also starred Brian Blessed and Susan George and Blackman played a school teacher.