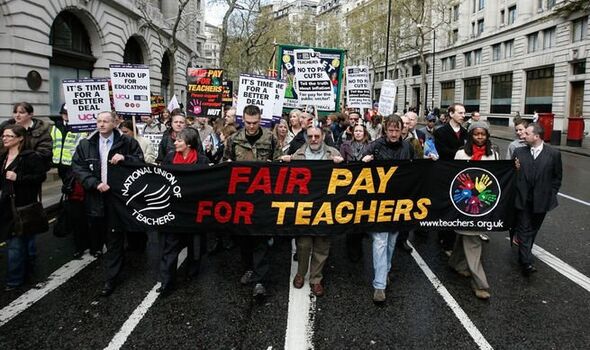 Brits face a potential summer of discontent as England’s largest teaching union threatens to ballot members to take strike action. The threat of industrial action comes after 40,000 staff members from the National Union of Rail, Maritime and Transport Workers (RMT) ground the country to a halt over concerns about pay and work conditions.

However, amid concerns over strike action in schools, damning analysis by the TaxPayers’ Alliance (TPA) has since revealed top education union bosses took home almost £1.4million in remuneration.

The Stoke-on-Trent North MP said: “These top-paid teaching unions don’t have a leg to stand on.

“Education union barons are pushing their own political agenda by threatening to go on strike, regardless of the life chances of young people they will destroy, proving once again the embarrassment they have become to the profession.”

JUST IN: US warns unilateral action on Protocol ‘not conducive’ to trade talks

Mr Gullis went on to call for Dr Mary Bousted and Kevin Courtney to resign after the joint heads of the National Education Union received a total remuneration of £293,358.

However, the highest paid education union boss was the general secretary of the National Association of Head Teachers Paul Whiteman.

According to the TPA, Mr Whiteman received a total remuneration of £216,387.

The general secretary of the National Association of Schoolmasters and Union of Women Teachers was also stung for receiving £185,111 up to December 2020, including more than £28,000 on a ‘union car’.

Despite the NASUWT’s general secretary’s inclusion in the report, Dr Patrick Roach wrote to Education Secretary Nadhim Zahawi to demand a pay rise.

Dr Roach said: “The NASUWT is clear that an immediate programme of pay restoration is needed, commencing with at least a 12 percent pay award this year for all teachers, recognising the 20 percent real terms reduction to the value of teachers’ pay since 2010.”

Duncan Simpson, a research director at the TPA, responded to the findings by saying: “Taxpayers are fed up with lectures and disruption from loaded union leaders.

“Top teaching union officials, with their bumper earnings backed up by the taxpayer, have become completely removed from the people they are supposed to represent.

DON’T MISS:
Imperial legacy is a major asset for Brexit Britain – NEW report [INSIGHT]
Brexit Britain still has ‘OVER 2,000 EU rules’ to be revealed [REVEALED]
Have Your Say: Would you vote for an ‘anti-Brexit’ candidate? [REACTION]

40,000 RMT staff members ground the country to a halt over concerns about pay and work conditions. (Image: Getty)

“Ministers should stand firm and instead stop taxpayer support for the union bosses needlessly threatening to shut down schools with strikes.”

The TPA’s report comes after the joint general secretaries of the National Education Union told Mr Zahawi they would campaign in favour of industrial action if the Government continued to push ahead with its plan to provide a three percent pay increase for most teachers in England.

The latest figures show the proposed increase would fall well short of the UK’s inflation rate, with the consumer price index rising by 9.1 percent in May.

In the letter, the NEU said: “You must respond to the new economic reality of double-digit inflation and the threat this poses to teacher living standards.

“We call on you to commit to an inflation-plus increase for all teachers.”

However, Mr Zahawi, who replaced Gavin Williamson as Education Secretary in September 2021, has since said it would be “irresponsible” and “wrong” to make children endure more disruption after COVID-19 adversely affected learning.

Writing for the Telegraph, the Stratford-upon-Avon MP said: “Young people have suffered more disruption than any generation that’s gone before them and to compound that now, as recovery is in full swing and families are thinking about their next big step following school or college, would be unforgivable and unfair.”

Despite Mr Zahawi’s intervention, an Opinium survey for TalkTV found 46 percent of Brits would support teachers taking industrial action, compared to just 41 percent who would oppose strikes in schools.