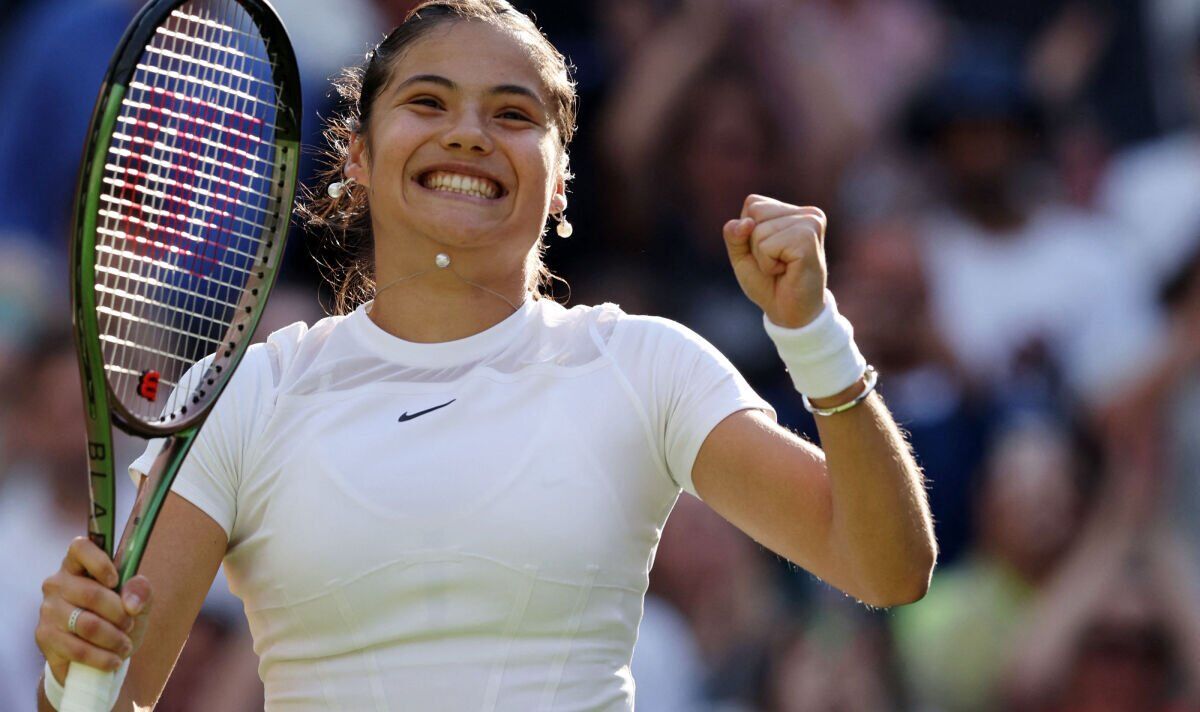 Emma Raducanu put aside her sketchy Wimbledon preparations to make a triumphant start to life on Centre Court against Belgium’s Alison van Uytvanck.

The 19-year-old overcame a tense start and a dangerous opponent to come through 6-4, 6-4 on her first competitive appearance inside the hallowed arena. Raducanu’s minimal grass-court preparation counted against her – half an hour at the Nottingham Open three weeks ago before she withdrew injured was thin gruel.

She was predictably up and down but showed tremendous feistiness to put away the World No 46 who had already won two grass-court titles this month. The big-serving Belgian offered plenty of problems but gradually Raducanu found the solutions and by the end of a 101-minute examination was purring nicely.

Raducanu had to dig deep right from the start – she saved three break points in her opening service game – but she found a way. Her safe passage into the second round was a huge boost personally and for the championships.

The opening break in the first set, when it came for Raducanu in the seventh game, was gifted by a double fault but she had set it up with a searing backhand return. After surrendering her next service game to love but then dished out the same medicine to the Belgian.

She closed the set out, from 15-40 down, at the second time of asking in 52 minutes as her aggressive groundstrokes found their range. Van Uytvanck had to save six break points to hold in the opening game of the second set but landed the first punch after the best rally of the game to go 3-1 up.

Raducanu though hit straight back to break straight back to love and the increasing pressure she applied on the Belgian’s serve took its toll when van Uytvanck again double faulted to give the Briton the chance to serve out the match.

She duly did so.  To say her life has changed since her last appearance at Wimbledon a year ago is a gross understatement. It is hard to think of an athlete whose existence has undergone such a total transformation.

From anonymous Kent A level student to one of the most recognisable stars of British sport, mate of Dua Lipa and Elle cover girl, represents a head-spinning twist in anyone’s estimation.

When she was last at Wimbledon – as the British No 10 – it was as a relative unknown. Her tournament ended in dramatic circumstances with Raducanu pulling out of her last-16 match against Ajla Tomljanovic with breathing issues, a precursor to a year when her body has frustratingly rarely obeyed orders.

The exception, of course, was the fairytale fortnight of that US Open triumph in New York when everything she touched turned to gold.

After the earlier rain, the sun shone on Raducanu at Wimbledon. Blue sky, late afternoon sunshine…this was how Centre Court was supposed to look. It will have been the scene she will have pictured a million times in her daydreams.

It was a pity then that at no point in her match was it anywhere near full.

Solid as the home support was with an array of pro-Raducanu leftover Jubilee merchandise on show, for one of the most eagerly-awaited moments of these championships to be played out in front of a wall of green seats was a great shame. Centre Court was sold out yesterday and if those lucky enough to have tickets could not be bothered to take them up after sitting through Novak Djokovic’s match then it reflected pretty badly on them.

Those inside thoroughly enjoyed the ride.