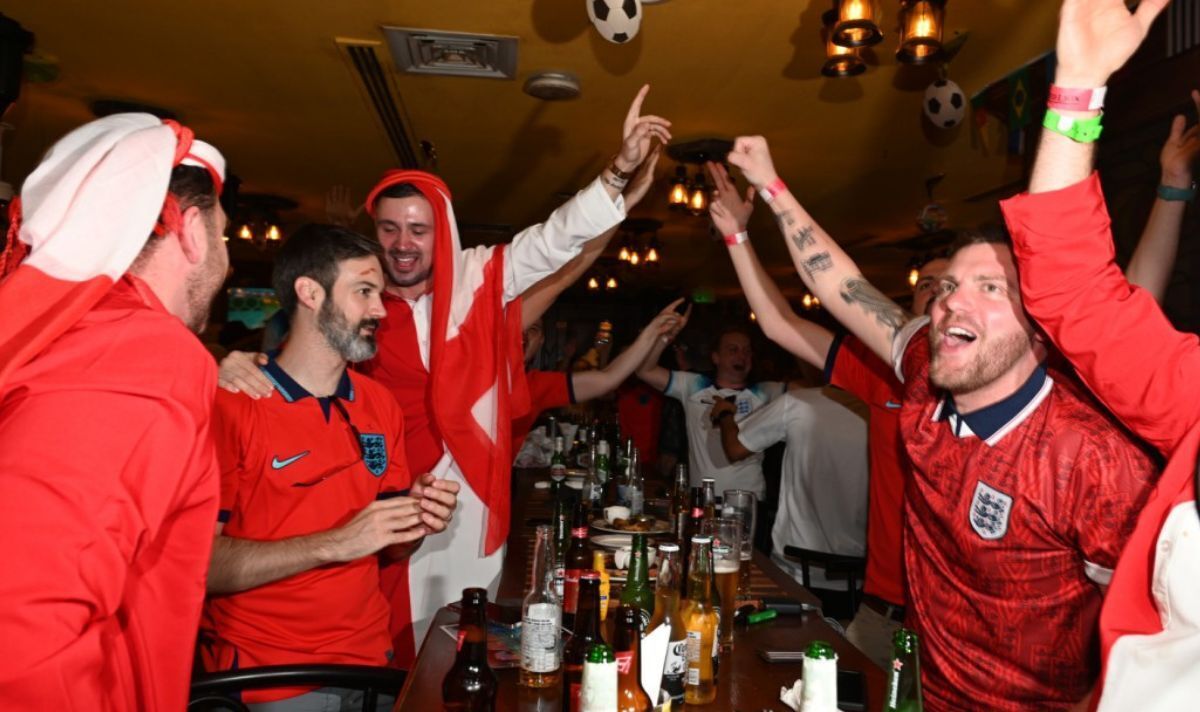 England fans in Doha couldn’t help but revel in Wales’ gut-wrenching World Cup defeat to Iran that puts Rob Page’s side on the brink of elimination in Qatar. The Dragons were up first on another action-packed day of football in Qatar but Gareth Bale and Co struggled to get going in the scorching Middle Eastern heat.

Their task got even harder in the second half when Wayne Hennessey was sent off for a Kung-fu kick on Mehdi Taremi following a VAR review of the incident.

Then Iran plunged a dagger into Welsh hearts deep into stoppage time when Rouzbeh Cheshmi blasted home a low driven effort from range into the corner of Danny Ward’s net.

Things would get even worse for Wales moments later when Rouzbeh Rezaeian made sure of the victory when he clipped the ball over the onrushing Ward.

England fans in Doha drinking in bars ahead of tonight’s clash with USA had little sympathy for their fellow home nation.

Three Lions supporters were celebrating Wales’ defeat as if they had just won a match themselves – although they will now be hoping to avoid an unexpected upset against USA in the hours that follow.

Chants of “Wales get battered, everywhere they go!” were also booming out from the bars packed with England supporters.

It was a similar theme on social media too, after @SoccerAM tweeted a clip of distraught Wales fans, captioning the clip: “You’ve got to feel for Wales fans.”

Gareth Southgate’s men will qualify as winners of Group B with victory, barring a dramatic swing of goals on the final match-day when they take on Wales and Iran face USA.

Wales are now all but eliminated unless they can pull off something special against Group B favourites England in their final match of the group phase.

They will also be keeping close taps on tonight’s match – a game that still could prove to be significant for their qualification prospects.

Captain Bale is refusing to give up on qualification – despite conceding that Wales are now up against the odds to book their place in the last 16.

“It’s gutting. There’s no other way to say it,” Bale told BBC Sport. “We fought until the last second but it’s one of those things; it’s difficult to take but we have to recover and go again.

“We have to pick ourselves up straight away. It’s going to be difficult but we’ve got one game left. And we want to enjoy it as well.

“It’s going to be difficult and it depends on the other game, we’ll see.”

Iran manager Carlos Queiroz declared his payers deserve respect for the way they bounced back from their opening 6-2 defeat to England.

“It’s just the beginning, we need to finish the job,” the former Manchester United assistant coach said. “We backed our football and I don’t have the words how to say thank you to our players. They were brilliant and deserve all attention and respect.”