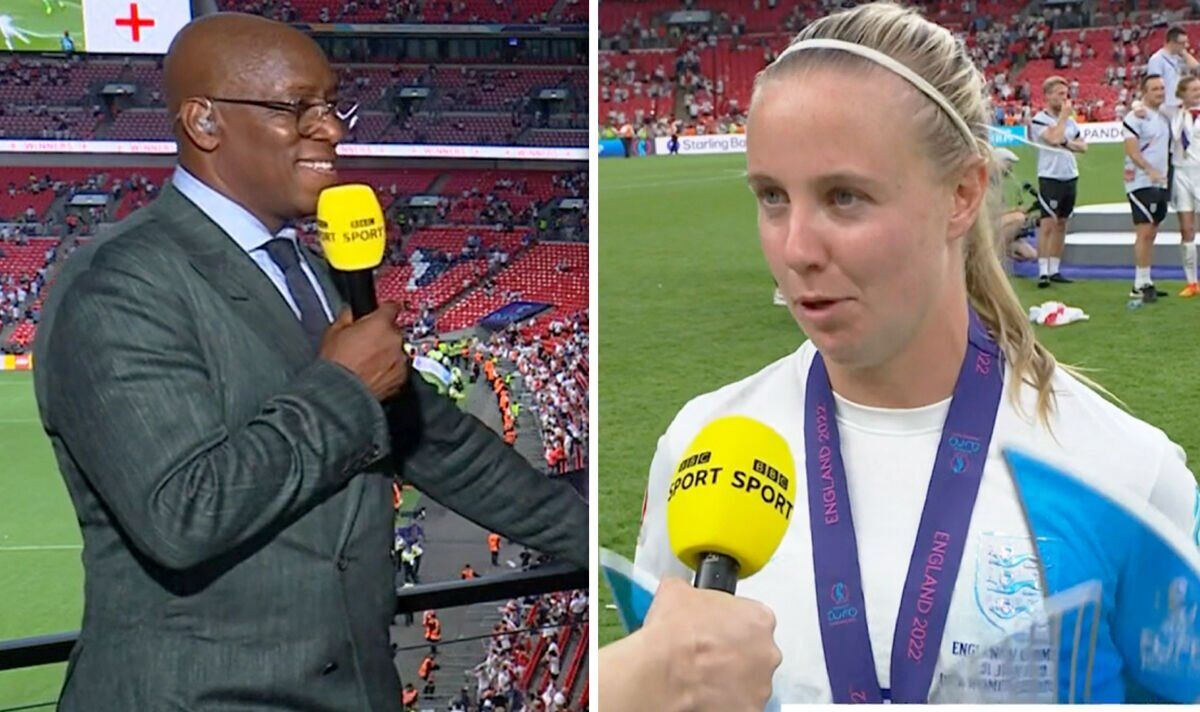 England forward Beth Mead cracked a joke at Ian Wright’s expense in her BBC interview following the Euro 2022 final win over Germany. Mead was made to wait to carry out her interview by the Arsenal legend.

Wright was in the punditry studio discussing the future of the women’s game after England’s glorious triumph. The pair have a good relationship and Wright has often championed the 27-year-old in her career.

Mead was named Player of the Tournament and also won the Golden Boot. She was holding both trophies as she waited for Wright in the studio to finish talking.

When the pictures cut to Mead, interviewer Jo Currie asked: “Beth, how tired are your arms right now, those are big old trophies.”

And Mead joked they were even heavier after she was made to wait so long. She said: “Very, they’re very heavy, it’s because Wrighty’s been talking too much, apparently.

“No I mean, they’re good reasons for your arms to be heavy aren’t they?” Mead has been through plenty of tough times in her career but is grateful for where she has come.

The Arsenal star added: “Sometimes football puts you down but bouncing back is the best way and that’s what I’ve done. I’m speechless, I can’t take it all, I’m still in shock, I can’t believe we’ve won it, I just can’t.

Arsenal boss Joan Eidevall was alongside Wright in the studio. And he said he will try to find a new motivation for Mead ahead of pre-season next month.

The Swede commented: “Now we need to create more motivation for her, right? We were talking like this was the revenge tour, now we have to find something else, another story that is on a new level. I need at least two weeks to come up with that!”

Mead did not score in the final but her six goals and five assists won her the Golden Boot. Ella Toone opened the scoring for the Lionesses before Lina Magull equalised with 10 minutes remaining.

Penalties loomed but Chloe Kelly popped up to score her first international goal in the 111th minute. The Manchester City forward poked in from close range to seal England’s first Euros success.