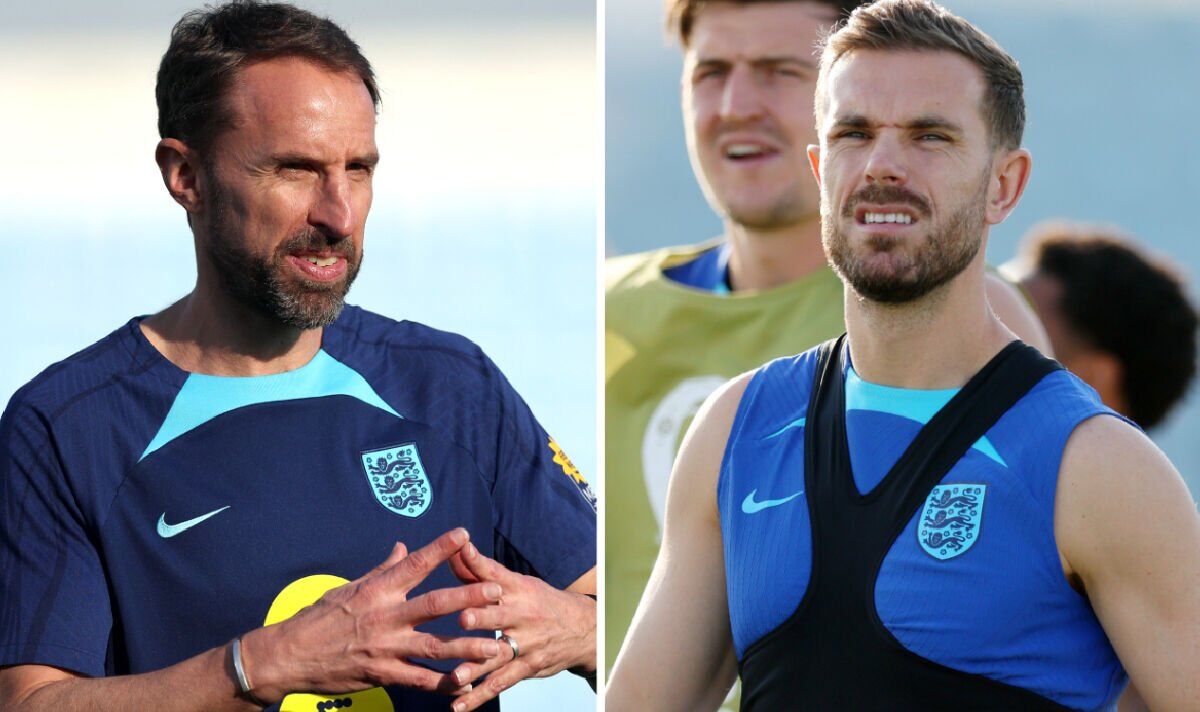 Bellingham, 19, was widely praised after that match and is enjoying a brilliant season so far. Henderson replacing him after 70 minutes against USA raised some eyebrows, and the switch for the match against Wales will undoubtedly prompt debate too.

Southgate has also already confirmed that captain Harry Kane will lead the line against neighbours Wales at the Ahmed bin Ali Stadium. Kane was spotted with his ankle covered in straps after Friday’s 0-0 draw with USA.

But the England boss said: “He’s fine in terms of the knock. It’s his foot, not ankle. He’s trained well. Only Ben White missing through illness. We’ve got pretty much everyone available for selection. It’s a great position to be in. It makes selection difficult but we want a full-fit squad.”

And behind Kane, Liverpool skipper Henderson will be deployed in midfield over Bellingham. Declan Rice is expected to partner Henderson with Southgate seeking more experience and control in the centre.

The Three Lions were overrun on several occasions against the Americans and against Wales need to win to guarantee their spot in the knockout stages as group winners. To qualify for the next round, they simply need to avoid a four-goal defeat to Wales.

Elsewhere, England may be unchanged. Despite calls to start Manchester City sensation Phil Foden, Southgate is likely to keep the faith with Chelsea’s Mason Mount. And Raheem Sterling and Bukayo Saka are also primed to start their third successive matches in the Middle East.

In defence, Kieran Trippier and Luke Shaw should start at right-back and left-back with Harry Maguire and John Stones the centre-half partnership. The likes of Foden, Jack Grealish, Bellingham, James Maddison and Kyle Walker – the latter two both back from injury – will be eager for minutes from the bench.

Henderson appeared in front of the media on Monday and said: “We expect big things from ourselves, it will be emotional, it’s how you deal with it. For me, we don’t need extra motivation. The motivation is to win games, and we’ll do our stuff on the pitch really, we will do our talking on the pitch, perform well and focus on what we’ve got to do. So, that’s what we will do.”

While Wales talisman Gareth Bale insisted following a 2-0 loss to Iran, which leaves them needing to beat England and hope for a draw between Iran and USA, that Rob Page’s side must go all out. And the ex-Real Madrid and Tottenham attacker will put in everything he has to get a win.

He said: “We will give everything on the pitch against England. We will fight again. The main thing for us all is that we have stuck together as a group. We don’t get divided by a bad team performance or result.

“You saw our reaction when we conceded against Iran, how devastated we all were, lying on the floor – heartbroken. After the game everybody was upset.  But no one can ever question our commitment. We will all stick together through thick and thin, through the ups and downs. We have been working hard the last few days in training which has been good.

“We just have to go out there and give everything. Hopefully we get the right result. I will give everything, like I always do for my country. I was flying into tackles in the 95th minute the other day against Iran. I will just try to lead by example and hopefully that’s enough on the day. That is all I can do.”