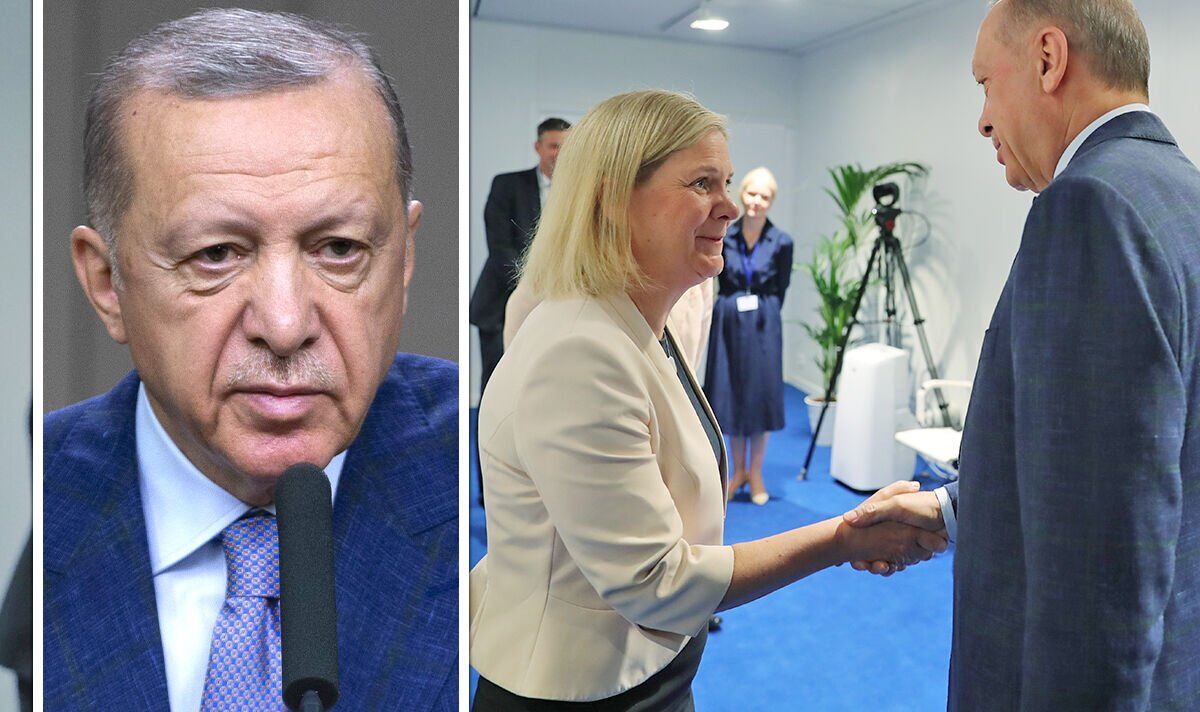 The three nations have signed a memorandum of understanding in Madrid, just hours before the crunch NATO summit begins in the Spanish capital tomorrow (Wednesday). Both Sweden and Finland applied to formally apply for NATO membership in May – nearly three months after Russia began its brutal war in Ukraine back on February 24.

He said on the sidelines of a NATO summit: “I am pleased to announce that we now have an agreement that paves the way for Finland and Sweden to join NATO.

“Turkey, Finland and Sweden have signed a memorandum that addresses Turkey’s concerns, including around arms exports and the fight against terrorism.”

Finnish President Sauli Niinistö said in a statement: “We had a thorough meeting with President of Turkey Recep Tayyip Erdogan and Prime Minister of Sweden Magdalena Andersson, facilitated by Secretary-General of NATO Jens Stoltenberg.

“As a result of that meeting, our foreign ministers signed a trilateral memorandum which confirms that Turkey will at the Madrid summit this week support the invitation of Finland and Sweden to become members of NATO.”

The statement from Finland also said: “Our joint memorandum underscores the commitment of Finland, Sweden and Turkey to extend their full support against threats to each other’s security. Us becoming NATO allies will further strengthen this commitment.

“Over the past weeks, Turkey has raised its concerns over the threat of terrorism. Finland has constantly taken these concerns seriously.

“Finland condemns terrorism in all its forms and manifestations. As a NATO member, Finland will commit fully to the counterterrorism documents and policies of NATO.”

He wrote: “Fantastic news as we kick off the NATO Summit.

“Sweden and Finland’s membership will make our brilliant alliance stronger and safer.”

During the last few weeks, the NATO membership applications from Sweden and Finland had faced heavy opposition from Turkey’s Government, led by President Recep Tayyip Erdogan.

The country’s leadership, citing concerns over the countries’ alleged support for Kurdish groups and arms exports, had been furiously against the move.

Earlier, Finland and Sweden had voiced optimism that Turkey may in fact lift its veto over their stalled bid to join the military alliance.

After landing in Madrid for the NATO summit, Mr Erdogan held more than two hours of talks with Sauli Niinisto, Magdalena Andersson and Jens Stoltenberg.

Several other major allies, including France and Spain, indirectly urged Turkey lift its opposition to the move.

Speaking at the Group of Seven summit in Germany, French President Emmanuel Macron called for a message of “unity and of force” from NATO in the Spanish capital.

Mr Niinisto told reporters in Helsinki earlier on Tuesday: “The general view is that the discussions went somewhat better, which should mean that understanding has somewhat increased on both sides,”

Swedish Foreign Minister Ann Linde had told daily Svenska Dagbladet (SvD): “We are prepared for the eventuality that something positive could happen today, but it might also take longer.”