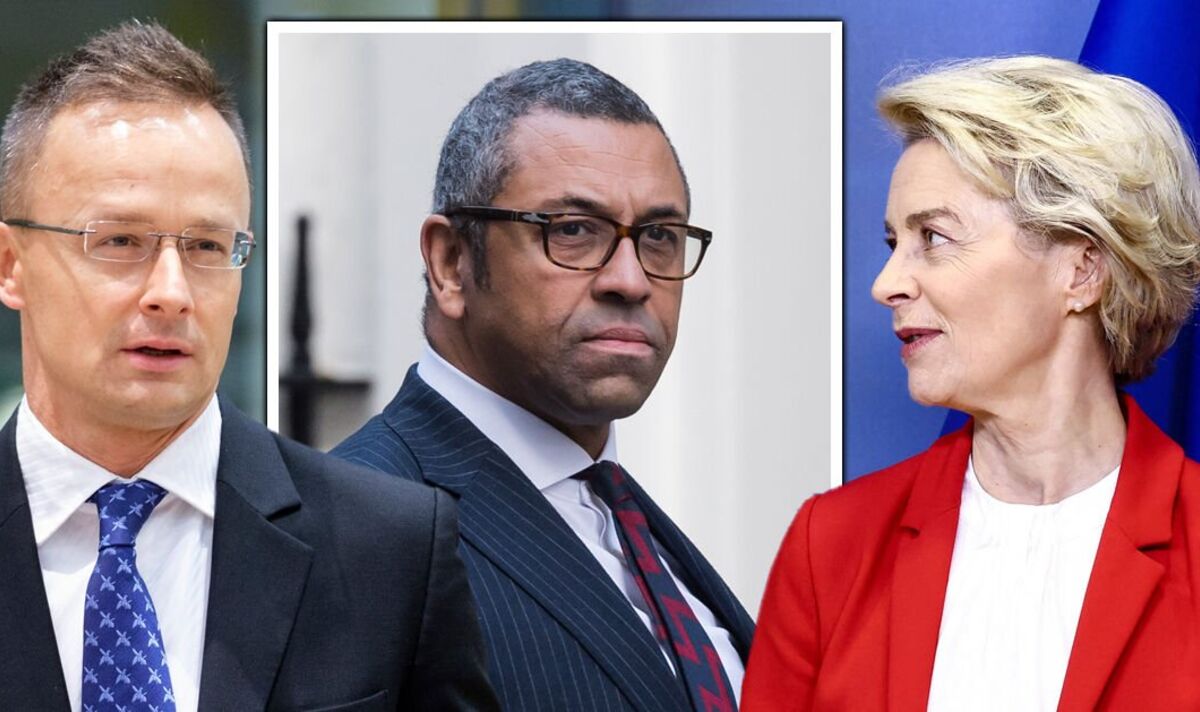 A major fracture has opened in the EU over Ursula von der Leyen‘s handling of post-Brexit talks with Britain as a member state has accused of of harming Europe because of a desire for “Brexit revenge”. Hungarian foreign minister Péter Szijjártó hit out at Brussels after he held his first talks with James Cleverly since he became foreign secretary in September. The two met for talks in London after speaking at a conference on violence against women in conflict organised by the Foreign Office as Mr Cleverly made his first ally within the EU.

Speaking exclusively to Express.co.uk in a rare newspaper interview following his discussions with Mr Cleverly, the Hungarian foreign minister said he believed too many people in Brussels are motivated by a desire for “Brexit revenge.”

Mr Szijjártó, who also discussed his country’s different position on Ukraine with Mr Cleverly, made it clear that Hungary is on Britain’s side regarding problematic talks on fixing the Northern Ireland protocol and other issues going forward.

The Hungarian minister joked that he is now on his sixth UK counterpart since taking office in 2014.

He said: “We attach a lot of significance to the debates between London and Brussels. They should be settled in a way that is based on mutual respect and which could make possible to have rational and effective cooperation.

“What the European Union should push for now is to try to minimise the loss caused by Brexit.

“But instead of a rational and mutual respect approach what we are seeing now is Brussles is making steps which bring us further away not closer.”

The minister said it as wrong to exlcude the UK from the Horizon Project on research and innovation as well as failing to take a reasonable approach with the Northern Ireland protocol.

“I told [Mr Cleverly] we will continue the consultation with Brussels in rdr to push the EU from inside to behave in a pragmatic and efficient manner towards the UK.”

He added: “It is no question that they [Brussels] still have the revenge because they felt personally insulted by the fact that the British people stood up and took their liberty to make their own decisions about their own future.

“It is very strange for the bureaucrats in Brussels for a nation to have its own will and if it has its own will then it expresses it and represents it.”

Hungary has its own dispute with Brussels after the European Parliament voted that funds should be withheld after it refused to take central dictats from the European Commission.

Mr Szijjártó pointed out that like the UK before it left the EU, Hungary takes the view that national sovereignty should not be overcome by a desire for federalism in europe.

He said: “We struggle allot because of this approach in Brussels.

“When we try to put forward a rational, a common sense based issue, an issue based on national interest, we are immediately stigmatised.

“By being called allies of Putin, agents of the Russians, retrograde, dictatorial, fascist, anti-democratic whatever.”

Mr Szijjártó claimed Brussels has a different viiew of democracy.

“We [in Hungary] believe that democracy means you act in accordance to the will of the people.

“People express their will through elections.

“But in Brussels when they say democracy, they only consider a political system democracy when it is being governed by the extremist liberals.

“If it is not the extremist liberals who govern the country then the country is proclaimed as not a democracy.”

Mr Szijjártó added: “Forcing us to forget where we came from, who we are is too much.”

He admitted he regretted the UK’s departure because “it was in the sovereignist camp” against fedeeralists in Brussels.