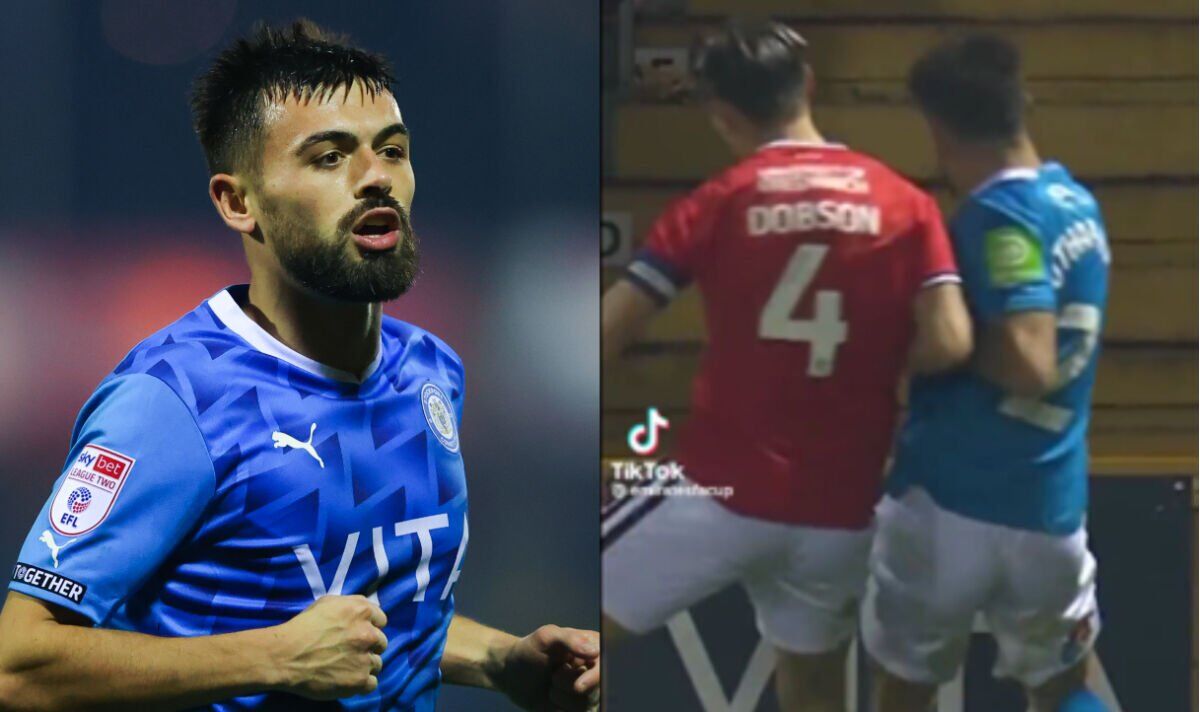 The FA has come under fire after a clip of Stockport County right-back Macauley Southam-Hales being tackled into advertising hoarding appeared on the organisation’s Tiktok feed. The defender escaped without injury but was ‘very lucky’ not to have sustained a serious injury.

Stockport beat Charlton 3-1 in their FA Cup replay on Wednesday, with William Collar scoring a hat-trick at Edgeley Park. Though the gloss was taken off of the victory in the 67th minute when Southam-Hales had to be replaced by Oliver Crankshaw.

The right-back collided with advertising boarding around the pitch after being nudged by Charlton’s George Dobson, leading him to sustain a head injury that saw him promptly taken to hospital after wearily leaving the pitch. Footage of the clip showed just how serious of a matter the incident was, though the official FA Cup TikTok appeared to attempt put a humourous spin on things.

They posted the clip with the theme tune to the 1980s Nestle advert ‘That’s Why I Love Nestle Crunch’, with a screaming sound effect being heard upon Southam-Hales’ impact with the hoarding. Many felt that the post was in very poor taste, especially after Bath City’s Alex Fletcher had to undergo brain surgery last month after a similar collision.

One Twitter user wrote: “I see the Emirates FA Cup have made a distasteful TikTok. It’s only a matter of weeks since Alex Fletcher sustained a horrific head injury doing this and nevermind the fact Macauley had to go to hospital. Terrible, in my opinion.”

Another added: “Appalling! Making a video clip for ‘entertainment’ of someone receiving a head injury is neither entertaining or acceptable.” Southam-Hales’ mum, Tanya, revealed on Thursday that her son had been given the all-clear from the hospital, though Stockport boss Dave Challinor has revealed that his defender came very close to sustaining horrendous injuries.

He told BBC Radio Manchester: “He’s got a whopper of an egg on the back of his head. In the grand scheme of things, if he has a clean bill of health, he’s very, very lucky.

“If you look at it from a football perspective, as much as people might not mean certain things or meaning to hurt anybody, if that’s not endangering an opponent, I’m not sure what is. Regardless, it should be a sending-off. He’s probably an inch away from potentially a fractured skull.”

Express Sport has contacted the FA for a comment on the clip.