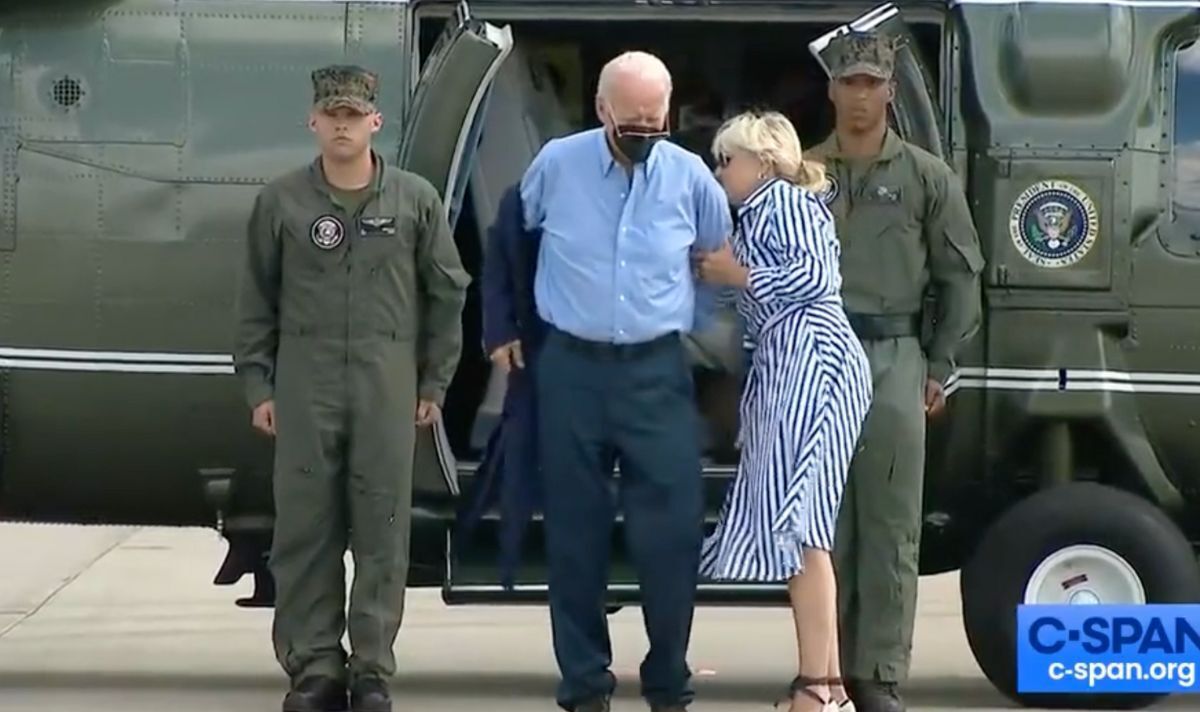 FLOTUS to the rescue! Biden helped by wife Jill as US leader struggles to put on jacket

An awkward video shows Joe Biden struggling to wear his own jacket and asking his wife Jill for help as they step off the Marine One helicopter in Kentucky. Once the US leader manages to get hold of the sleeves, Mr Biden’s signature aviator sunglasses could be seen falling on the tarmac path. President Biden has been dogged by persistent blunders since the early days of his presidency in 2021.

The clip captured the moment President Joe Biden had a hard time putting on his navy blue blazer outside the Marine One helicopter as he and his wife Jill headed back to Air Force One to leave Kentucky for Washington DC.

As they stepped off the helicopter, the US leader is seen attempting to wear one sleeve, but as soon as he realised the need for help the leader is seen looking at his wife Jill asking for assistance to find the second sleeve.

Jill Biden, who was walking right in front of him, is seen turning around and getting closer to her husband to provide assistance.

The First Lady managed to help, but as soon as her husband got hold of both sleeves, Biden’s signature aviator sunglasses, balanced precariously on top of his mask, are seen falling on the tarmac path right outside the helicopter.

The US President quickly bent to the ground and picked up the glasses.

At the moment of the scene, Mr Biden and his wife had just finished their tour in Kentucky to meet families and people affected by the devastating floods recorded in eastern Kentucky on Monday.

On their tour, the President and his wife met with first responders and families who had lost their homes on Monday due to major flood episodes in Kentucky.

He and the First Lady examined shelled-out buildings and destroyed neighbourhoods in Lost Creek, eastern Kentucky.

Joe Biden pledged more financial support for the most hit by the flood and described the flooding episode as “another sign of dangerous climate change”.

Drawing a connection between the flooding episode and climate change, he said: “We’ve suffered a consequence of climate change, a significant number of weather catastrophes around the nation. This year and a half I’ve been President, I’ve flown over 1000s acres of fire. Forest is burning. More forest burned down and in the West and the entire state of New Jersey, New York all the way down”.

In a statement to the families, he said: “I promise you. We’re staying with the federal government along with the state and county and the city. We’re staying until everybody’s back to where they were, not a joke.