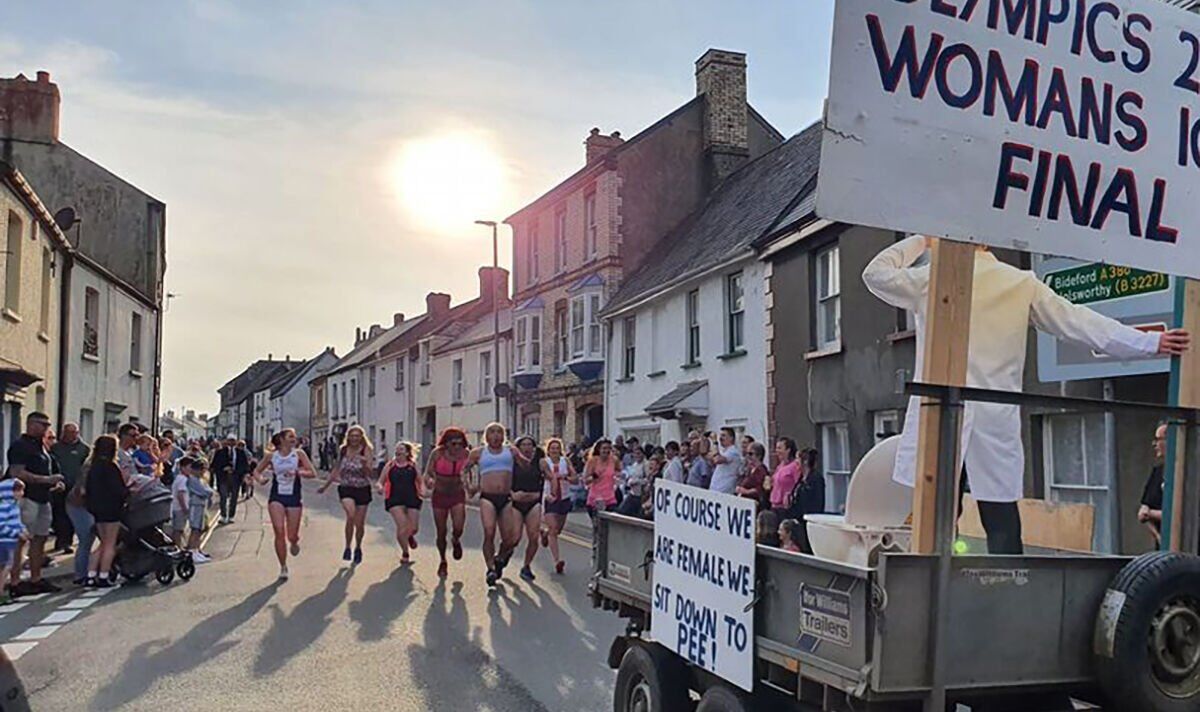 Donna Landy was shocked to witness the men portraying the “Olympics 2024 woman’s 100m final” during the Great Torrington and Mayfair Carnival in Devon. Signs were waved in the procession, including one that said: “Of course we are female we sit down to pee.”

Donna, who has transitioned from a man to a woman, said the float highlighted the “backwards” viewpoint on transgender issues.

The inclusion of transgender women in sport has divided opinion both inside and outside the sporting sphere recently, after Lia Thomas became the first known transgender swimmer to win the highest US national college title with victory in the women’s 500-yard freestyle.

Donna, whose daughters were in the parade, said: “I got there a bit late and was just catching up with the procession when I came across this float, the last one in the parade, and was a bit puzzled. There were clearly some men in drag, along with some women in proper athletic gear, and every now and again they ran a short sprint to catch up with their float. When I caught up with the float and read the sign my heart sank, it was clearly mocking trans athletes in sport and by extension all trans people, really.”

Donna told Devon Live the float made her “shocked, angry, sad and afraid”.

The comedian, from north Devon, continued: “I suppose the fact that they accepted it so readily shows how little awareness there is of trans issues in our local community.

“At the time I was shocked, angry, sad – and afraid. I started to wonder, what if people noticed I was trans and started mocking me, or worse? I could get jostled, or attacked. Perhaps it sounds far-fetched but I have trans friends who have been ridiculed in public and physically assaulted just for being trans, so who’s to say it couldn’t happen here?

“It just seems so backwards really. I mean, transwomen have to go through a long and complicated process before they can be accredited to compete in their acquired gender in athletics, it’s not just a matter of turning up and saying ‘I’m a woman now, let me run the 100m against women.’

“They have to get their testosterone levels down to within certain limits for over a year, to ensure they don’t have an unfair advantage. And it’s working – we haven’t seen a rash of transwomen suddenly storming the sprints in recent years. The idea that all you have to do is sit down to pee in order to compete in the women’s Olympics is a reductio-ad-absurdam argument that mocks trans athletes, the sporting governing bodies that administer the whole procedure, and by extension all trans people.”

Donna added that the claim “it’s just a joke” is “often used by people who want to make jokes at the expense of people with less power than them”.

She said: “Trans people are among the most marginalised in the UK at the moment. They are far more likely to be bullied at school, and to have poorer academic qualifications, and poorer mental health, as a result. This leads to poorer outcomes later in life, with less job opportunities and less chance of being accepted by their communities.

“A large proportion of trans people attempt suicide because of these difficulties, and because of the immense waiting time for NHS treatment, often as long as five or seven years.

“And floats like these are not really joking, they are really making a pointed dig at trans athletes, and trans people, and are intimidating. I’m an adult but imagine how a trans teen must feel seeing something like that in their local community, and everyone laughing along and clapping. It’s hard enough for young people to come out as it is, without people openly displaying their ridicule and intolerance.

“I started transitioning in 2017 and am still on the interminable waiting list for NHS treatment. I work during the day as a software engineer, and at night I like to do stand-up comedy. There’s nothing quite as much fun as making people laugh, particularly about trans issues. I really like meeting the audience where they are, with whatever pre-conceptions they have about transwomen, and to make some jokes about it so we’re all laughing.

“For a lot of people, I’m the first transwoman they’ve met, and they soon see that I’m not the scary kind of person some of our newspapers would make me out to be. So, in a small way I like to think I make a bit of a difference.”

Devon Live has aprroached the organisers of the Great Torrington Carnival for comment.