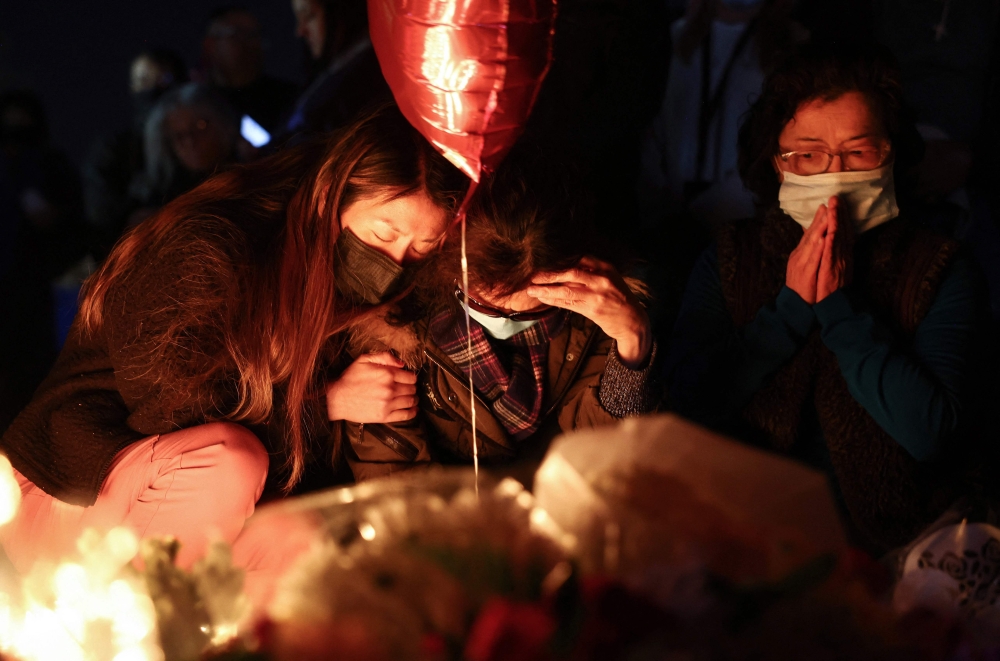 The killings came in a span of just 48 hours — so close together that California governor Gavin Newsom was at a hospital meeting with victims of the first when he was pulled away to be briefed about the second.

“Tragedy upon tragedy,” he tweeted.

China’s foreign ministry called for its citizens in the United States to “pay close attention to the local security situation” and “avoid going to places where people gather” in the wake of the killings.

Investigators were still probing the motives behind the two incidents, which stood out among the scourge of mass shootings in America both for the community impacted—gun violence is usually seen as rare among Asians and Asian Americans—and for the age of the suspects, 67 and 72.

The Monday bloodshed occurred at two farms around Half Moon Bay, a coastal community south of San Francisco.

San Mateo County Sheriff Christina Corpus said seven people were killed and one wounded in the shootings, and that 67-year-old Half Moon Bay resident named Chunli Zhao had been taken into custody.

Reports said the dead were Chinese farmworkers, and that Zhao had worked at one of the farms.

Corpus said deputies had been dispatched to two nurseries around Half Moon Bay, a rural spot known for surfing contests and a pumpkin festival, around mid-afternoon on Monday.

Four people were dead at one of them and one was critically wounded, while three more fatally wounded victims were found at a second location.

Corpus said children were present at one of the sites.

“It was in the afternoon when kids were out of school and for children to witness it is unspeakable,” she said.

Corpus said Zhou then drove to a sheriff’s substation in Half Moon Bay, where ABC7 crews captured dramatic footage of him being pulled to the ground by armed officers.

“Zhao was taken into custody without incident and a semi-automatic handgun was located in his vehicle,” Corpus said.

That tragedy unfolded as detectives in southern California were still probing what drove 72-year-old Huu Can Tran to shoot dead 11 people gathered for Lunar New Year at a suburban dance hall on Saturday night.

He then drove to a second nearby dance hall, but was tackled and disarmed by an employee there in a move officials have credited with saving lives.

Los Angeles County Sheriff Robert Luna said Tran, who had been arrested in 1994 for unlawful possession of a firearm, fired 42 rounds in the attack in Monterey Park.

“What drove a madman to do this?” he said.

Luna confirmed officers had been told Tran may have been known to some of his victims.

Information about Tran remained unclear. CNN reported that, according to his marriage license, he had immigrated from China; while the New York Times cited immigration documents saying he was a naturalized US citizen of Vietnamese origin.

The family of one of his victims, 65-year-old My Nhan said the tragedy was “still sinking in.”

“She spent so many years going to the dance studio in Monterey Park on weekends,” a statement said.

“It’s what she loved to do. But unfairly, Saturday was her last dance.” — AFP