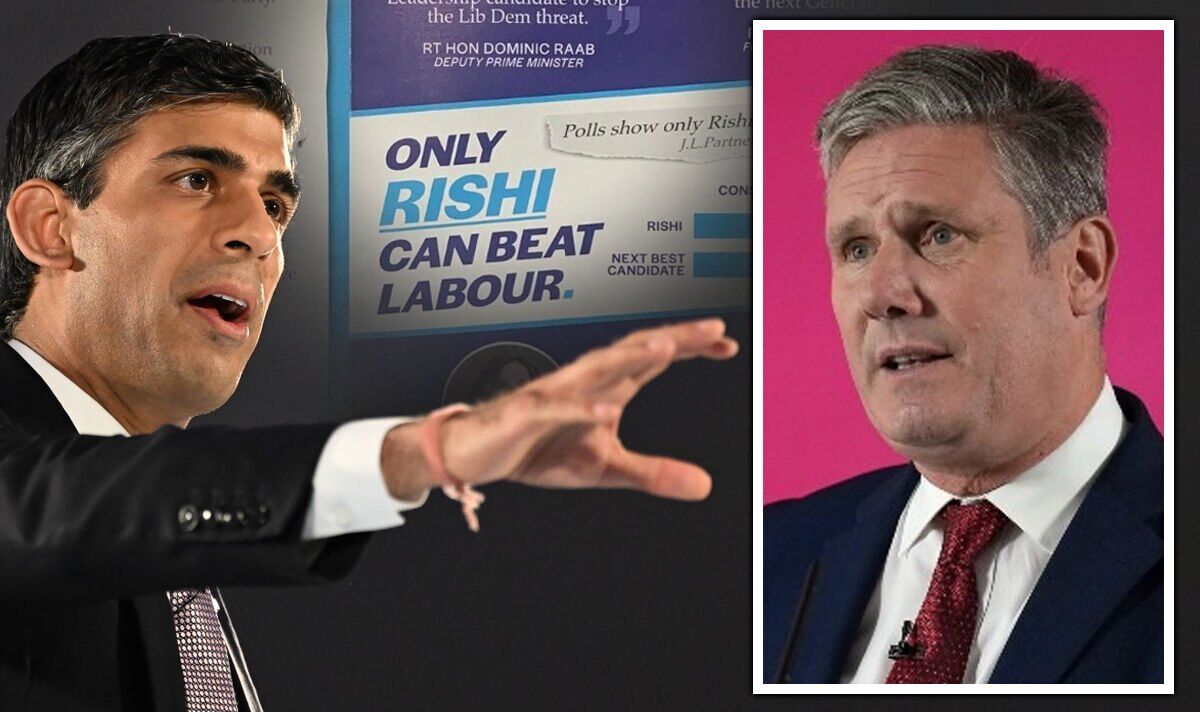 ‘He’ll conspire to reverse Brexit!’ Sunak vows to see off Starmer in plea to Tory members

The Conservative leadership contest has entered a crunch stage as the party’s 160,000 members start to receive their ballots as they are asked to choose between ex-Chancellor Rishi Sunak and Foreign Secretary Liz Truss. In a leaflet seen by Express.co.uk, Mr Sunak promised to “keep Brexit safe” and “win the next general election campaign by defeating Starmer’s Labour”. The Richmond MP, who was first elected to the House of Commons in 2015, currently trails Ms Truss in the opinion polls among Conservative Party members.

However, a recent survey conducted by IPSOS found Sunak is more likely to be seen as having what it takes to be a good Prime Minister compared to Truss and is level-pegging with Starmer.

The Brexit-backing former Chancellor also focused his leaflet on gripping inflation just days after the Bank of England warned the Consumer Price Index could hit 13 percent by the end of 2022.

“Because let’s just think about the alternative. An economy with inflation spiralling out of control.

“And a General Election result that sees a Labour-led coalition propped up by the Liberal Democrats and SNP.

JUST IN: ‘Some people have sex and drugs – but I was a Lib Dem’ says Truss at Eastbourne hustings

“A coalition that would conspire to reverse the result of the EU referendum.

“A coalition that would wreck the economy, abandon our values, erase our history and destroy the Union.”

Sir Keir had vowed to keep the UK outside of Brussels’ single market and customs union during a speech delivered at the Centre of Economic Reform last month.

However, a Eurosceptic campaigner warned the Leader of the Opposition, who was a leading supporter of holding a second referendum while serving as Jeremy Corbyn’s Shadow Brexit Secretary, could backtrack on his promise in return for the backing of either the Liberal Democrats or SNP.

They told Express.co.uk: “If he needed to go into coalition with the Liberal Democrats or even worse the SNP they may extract that [concessions on Brexit] as the price he is willing to pay.”

READ MORE: ‘I will wait until they are evicted!’ Truss red-faced as Foreign Sec BOOED and heckled

Ms Truss added: “I will lead a Government that delivers the change we need on the economy, I will cut taxes from day one, unlock the huge opportunities of Brexit, and undertake the bold economic reforms needed to grow the economy.”

The Southside source told Express.co.uk: “In terms of the Conservatives, we are definitely more worried about a Sunak-led party, with Truss not being a massive concern at this stage in the polls.

“He’s seen as the more classic Tory that will get the economy under control, although should he win we do have plans to go on the attack following the recess to actually make people realise he was the man who was looking after the economy as it all went wrong.”

In a slight boost to Ms Truss, the source added: “We are always conscious of the Brexit effect and the big populist names she has behind her; but also her endorsements from Tom Tugendhat and Ben Wallace are concerning as she is being rationalised by these kind of names.”