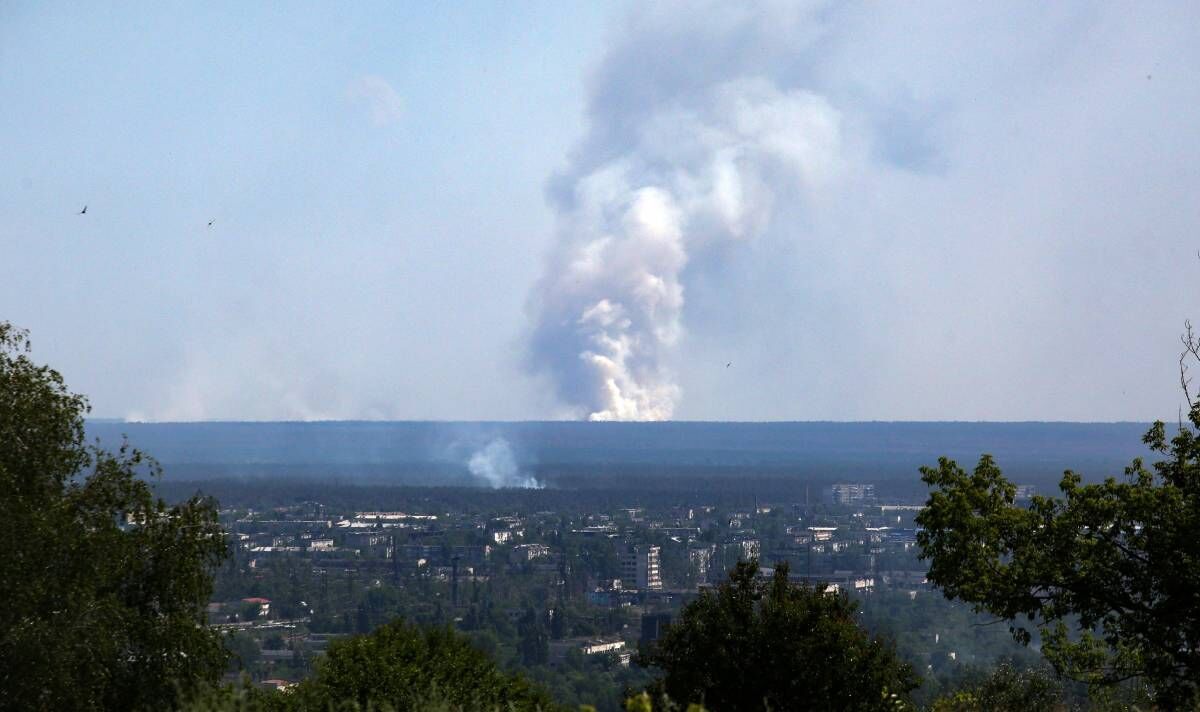 Hell on earth as ‘new Mariupol’ is shelled two days

Experts compared the siege to that at Mariupol as Ukraine’s troops were again holed up in a factory with hundreds of civilians.

Serhiy Haidai, governor of the Luhansk Oblast region, said “fierce fighting” in the surrounding industrial zone had cut off water, gas and electricity.

Officials said 568 civilians – including 38 children – were inside the Azot chemical plant as the bombardment continued.

They were unable to give casualty numbers because there had been no break in the shelling for more than two days.

“Everything is engulfed in fire, the shelling doesn’t stop even for an hour.”

The news came as six Russian ships in the Back sea were believed to be preparing a “massive launch” of cruise missiles on Ukraine.

But in more positive news yesterday, Kyiv’s forces destroyed a Russian tug in their first successful use of Western-donated Harpoon anti-ship missiles.

A Ministry of Defence intelligence report said the vessel had been delivering weapons and personnel to a Russian held island in the Black Sea.

President Volodymyr Zelenskiy had predicted Russia would step up its attacks ahead of the planned EU summit on Thursday and Friday.

He said the battle for Severodonetsk and its sister city, Lysychansk had been “difficult” but added: “We have our strong guys and girls there.

He added that as well as the two cities, the road connecting Severodonetsk and Lysychansk to the city of Bakhmut was under constant shell fire.

In a further sign of Russian menace yesterday, Putin said his new Satan II intercontinental ballistic will be deployed by the end of the year.

He boasted that he was bolstering his forces after suffering substantial losses to the “real heroes” who invaded neighbouring Ukraine four months ago.

Military sources believe Satan II – official name Sarmat – has a range of 11,000 miles and can deliver up to 15 nuclear warheads at hypersonic speeds.

Putin said: “We will continue to develop and strengthen our armed forces, taking into account potential military threats and risks.There is no doubt that we will be even stronger.”

In another sign of Moscow regrouping, Western officials warned that mass mobilisation is “about to happen”, with the Kremlin recruiting people from poorer regions.

Sources said despite the move, Moscow is “concerned” that mobilisation is an “admission of failure” in what was meant to be a short, controlled attack on Ukraine.

The Kremlin also fears country-wide mobilisation could stoke unrest in cities, so wants to increase the fighting pool through “very significant recruitment” in poor areas and by raising the service age limit.

Officials added that there is “more chatter” about Vladimir Putin’s health and “more speculation” about who will replace him in Russia.

But although the 2024 presidential election “is certainly looking more interesting”, they did not foresee an “immediate threat” to the Russian President.

Meanwhile yesterday, Hollywood actor Ben Stiller, who met President Zelensky over the weekend, told how “distressing” and “shocking” the scenes he witnessed were.

Ben, who visited Kyiv in his role as goodwill ambassador for the United Nations refugee agency, said: “It’s my first time coming to an area that’s in conflict.

“As you get closer and closer to Kyiv, into the east of the country, you start to see the roadblocks and see the destruction, which is really shocking.”

“I’m an actor, so the first thing I go to is like, ‘Oh, it looks like a movie’. But the scale of it is even bigger and it’s real, so that’s really distressing.”