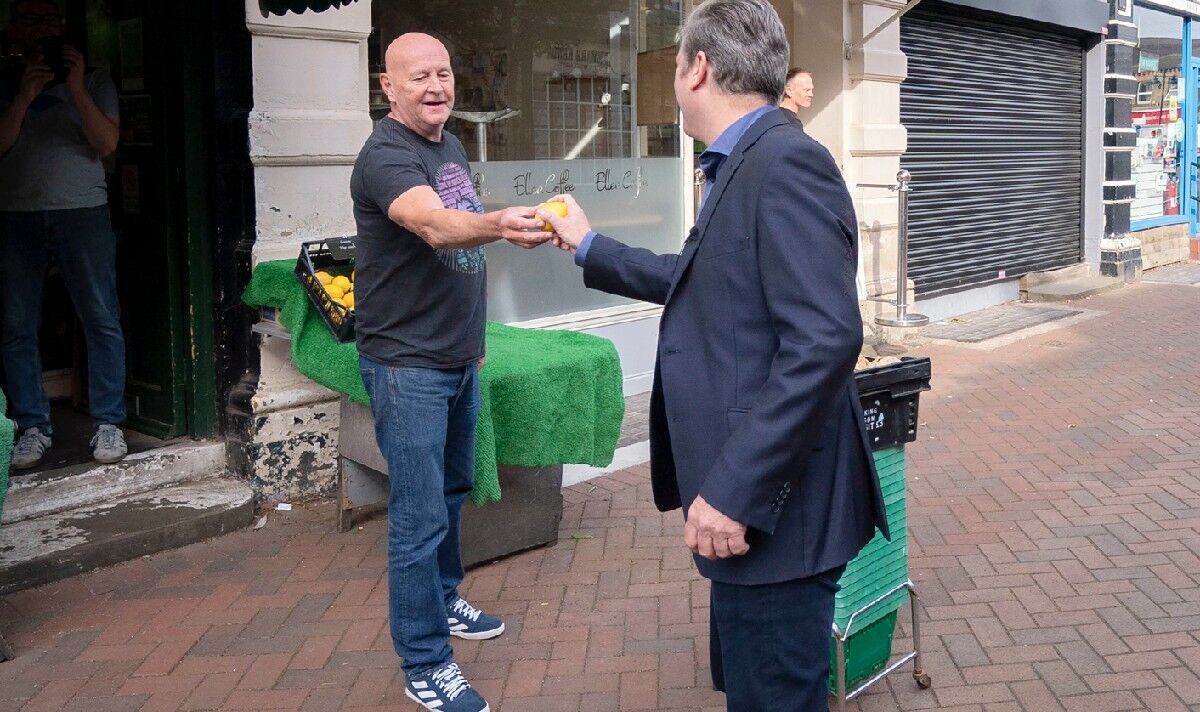 ‘He’s a joke!’ Starmer left red-faced after being handed LEMON in Wakefield

The Labour leader was visiting the market town of Ossett after Simon Lightwood’s victory in the vote when the trader initially offered him an apple. Sir Keir said thank you and went to take the fruit, but when he did the man grinned and passed him a lemon instead.

Deliveryman Paul Stoner, 60, said he asked him Sir Keir if he wanted an apple and when he said ‘yes’ he gave him a lemon because he thinks he is a bit of a joke.

Mr Stoner told Express.co.uk: “He said thank you. I think he thought it was an apple. It was just a joke. It was on the spur of the moment.

“It wasn’t a political act. I’m actually glad to see Labour get back in even though there’s a lot wrong with Labour. I’m a socialist at heart, a working man. Everyone is working class round here.”

The Conservatives lost two parliamentary seats on Friday in a crushing blow to the Prime Minister Boris Johnson’s party.

It prompted the resignation of its chairman Oliver Dowden and intensified doubts about the future of the PM.

The Liberal Democrats handed the Conservative Party its biggest by-election defeat in British history as the Tories lost a majority of 24,239 in Tiverton and Honiton.

In Wakefield, Mr Lightwood was elected with a majority of 4,925 on a swing of 12.7 percent away from the Tories to Labour.

Mr Johnson said after the results: “It’s absolutely true we’ve had some tough by-election results… I think, as a Government, I’ve got to listen to what people are saying.”

A number of Conservative MPs tweeted support for Mr Dowden, saying he was not to blame for the results. The messages suggest resurgent dissent among the Tories against Mr Johnson’s leadership.

Although under his party’s rules, Mr Johnson cannot face another confidence motion for a year, MPs fearing for their political futures may try to force a change to trigger a second vote.

A wave of cabinet resignations could be another means by which Mr Johnson could be forced from office before the next General Election due in 2024.

Liberal Democrat leader, Sir Ed Davey, said: “If Conservative MPs don’t wake up, I think at the next election, the voters will send them packing.”