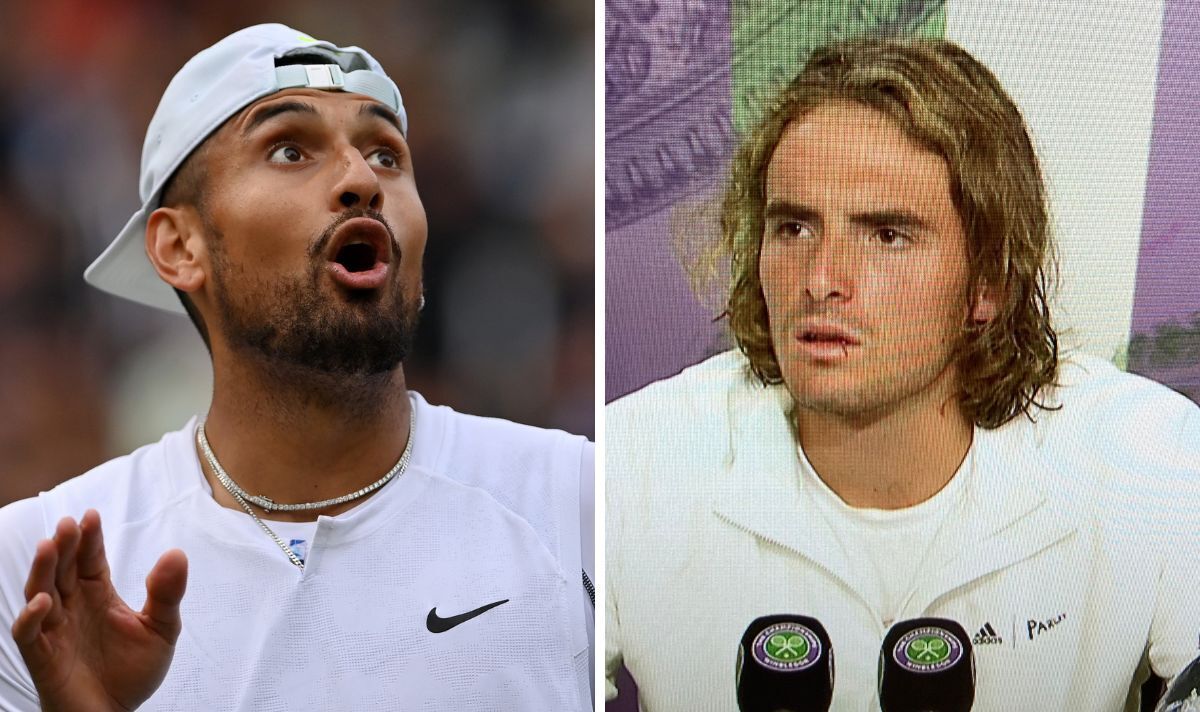 Stefanos Tsitsipas has likened Nick Kyrgios to a “bully” after the pair’s explosive Wimbledon third-round match on Saturday night. Tsitsipas and Kyrgios’s clash was always going provide fireworks but nobody was prepared for what took place on Court One this evening.

Kyrgios played up to the crowd immediately with a tweener and an underarm serve through the legs. And the majority of the 12,000-strong crowd were in full support of the Aussie with Tsitsipas trying to ignore the noise.

Even when Kyrgios had two line judges go up to the umpires to issues complaints, it was Tsitsipas who was lambasted with boos from the stands for walking away from the baseline to recompose himself. He eventually lost his cool at the end of the second set, smashing a ball into the stands with Kyrgios calling for the No 4 seed to be defaulted.

The fireworks continued as Tsitsipas struggled to keep his cool and stay in the match and occasionally appeared to try and hit his opponent on several occasions. Kyrgios eventually got the win, roaring in delight as the Court One crowd game him a standing ovation.

Tsitsipas was also cheered off the court with Kyrgios going on to say he still “loves” the Greek star despite their differences on the court. But the feeling may not be immediately mutual judging by Tsitsipas’ comments in the press conference.

He confirmed that he was trying to hit Kyrgios on multiple occasions and then called the Aussie a “bully”.

“I was aiming for the body of my opponent but I missed by a lot, by a lot,” he said. When asked why he was trying to hit Kyrgios, he added: “Just to stop, you know. This needs to stop. It’s not okay.

“Like, someone needs to sit down with him and talk, like, or — I don’t, like, I don’t know what to say. There is frustration behind that, for sure. I’m not used to play this way. But I cannot just sit there, act like a robot and act like someone that is completely cold and ignorant.

“You know, it has happened three, four times now. Okay, one time I understand, you know. But, like, if it starts happening two, three, four times, it really gets to your nerves. Because you’re out there doing your job, and you have noise coming from the other side of the court for no absolute reason.

He added: “It’s constant bullying, that’s what he does. He bullies the opponents. He was probably a bully at school himself. I don’t like bullies. I don’t like people that put other people down.

“He has some good traits in his character, as well. But when he — he also has a very evil side to him, which if it’s exposed, it can really do a lot of harm and bad to the people around him. Myself, when I feel like other people disrespect me and don’t respect what I’m doing from the other side of the court, it’s absolute normal from my side to act and do something about it.

“The handshake part, well deserved, well done for the great match, for sure, I need to congratulate my opponent. It’s a thing I have been doing my entire life. I have never finished the match and not given my hand to the opponent simply because of his performance.

“But attitude-wise, if there was a handshake for that, I would definitely be walking away from it, and that’s how it is. It’s not acceptable in any way.”