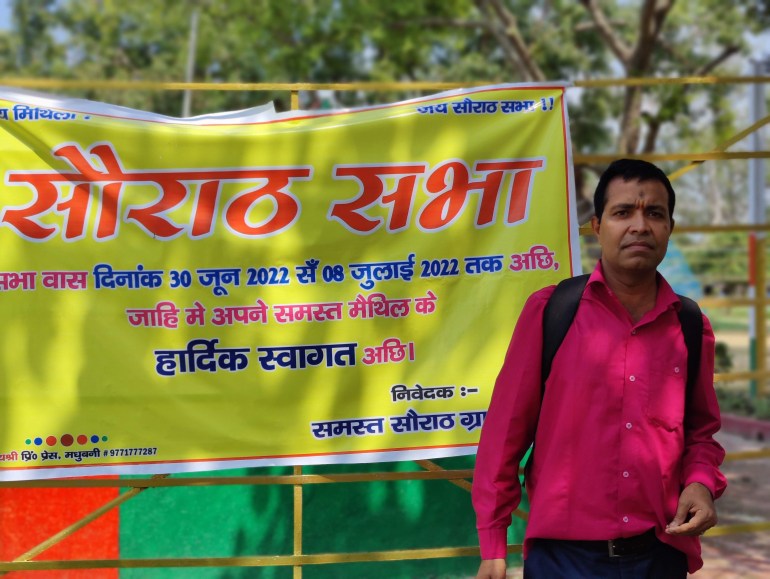 Madhubani, India – In the scorching heat of a July afternoon in eastern India’s Bihar state, a man in his mid-thirties nervously stands in the corner of a field. Wearing a pink shirt and black trousers, he waits in anticipation. It is a big day for him.

Nirbhay Chandra Jha, 35, has travelled more than 100km (62 miles), all the way from Begusarai to Madhubani district in the hope of finding a suitable bride for himself in Saurath, a village famous for its “sabha” or annual “groom market”.

Any moment now, Jha expects a girl’s family to come to him and start negotiations for a dowry. The aspiring groom stands there on public display, with a modest dowry tag of 50,000 rupees ($630).

Nirbhay is a Maithil Brahmin, a subgroup within Hindu Brahmins living in the Mithilanchal region of Bihar. The Brahmin community is the dominant social group in the complex Hindu caste hierarchy and has enjoyed historical privileges.

Nirbhay works as a manager at a factory, with a stable income, which he believes makes him a good choice for a husband.

Dowry, though illegal in India, is prevalent and has a high social acceptance, especially in Bihar and the adjoining northern state of Uttar Pradesh. Experts estimate the total value of dowry payments in a year in India is $5bn – equal to India’s annual spending on public health.

Nearby, about 20 men sit under the trees, calmly discussing the turnout of grooms in this season of “Saurath Sabha”, which they say is one of the world’s oldest matrimonial sites.

Though such traditions have largely disappeared in India, the one in Madhubani – part of Bihar’s Mithilanchal region – seems to have survived modernity.

In this unique 700-year-old tradition, the aspiring husbands stand in public display, and the male guardians of girls, usually the father or brother, select the groom. Generally, the bride has no say in the process.

“It is as if the bride’s family can just shop for a groom they like if they can pay the required dowry. It is like a groom market,” a man who lived in an adjoining village told Al Jazeera.

For Maithil Brahmins, the event is sacred.

Locals say the prospective brides’ families visit the village without declaring their intent and observe the men secretly from afar. Once they have made their choices, they put a Mithila gamchha, a red shawl, over the selected groom to make a public statement about his selection.

“It is akin to keeping a handkerchief on a bus seat,” says Madhubani resident Jyoti Raman Jha, referring to a first-come-first-serve system on public transports.

The thin attendance at the event speaks of the waning influence of the tradition. However, the meeting place for one of the highest castes among Hindus still draws people struggling to find matches from a tiny pool of prospects.

Some say there used to be open bidding for grooms in the olden days – with varying dowry tags. The more prestigious the profession of the groom, the higher the demand for dowry. Engineers, doctors and government workers were most sought after.

By their looks, the men now mainly seem to be from villages who have taken an extraordinary interest in keeping the tradition alive. But it has not been easy.

Economic progress and migration to cities have uprooted many Indians from familial land. Parents also now have lesser control over their children’s matrimonial choices. With cheap internet access, arranged matchmaking has increasingly shifted online. India has some of the biggest matrimonial websites in the world.

The Saurath gathering, however, is a remnant of an arranged marriage system that remains unpolluted by technological advancement.

The event is held beside a pond in the village, lined with dozens of peepal, banyan and mango trees. A huge but unused well, freshly painted with an Indian flag, stands as a reminder of the olden days. An ancient Hindu temple stands next to the pond.

A bright yellow banner, with “Saurath Sabha” written in Hindi in bold red, welcomes the attendees as they trickle in. The legend goes that when 100,000 Brahmins would reach the site, the age-old peepal tree would shed all its leaves.

“In the earlier days, buses would run across the state to bring people to the sabha,” Swaraj Chaudhary, 50, told Al Jazeera. “Now, hardly a few hundred grooms gather during the event.”

Villager Shekhar Chandra Mishra, one of the organisers of the sabha, blames the media and politicians for its decline.

“The media painted our sabha as a market where men were sold like cattle and had open dowry tags. Terms like Brahmin ‘dulha bazaar’ [groom market] became common,” he told Al Jazeera.

Mishra, however, does not shy away from acknowledging that the event has been propagating an open dowry culture for centuries.

“Nowadays, dowry is not looked at kindly but still happens under the table,” he says. “If parents have invested money in making their son an engineer or a doctor, they would want a return on the investment, and dowry is seen as one of the ways to do it.”

Dowry is a huge menace in Bihar and dowry deaths and killings are common despite various governments launching anti-dowry campaigns. According to the National Crime Records Bureau data from 2020, Bihar recorded more than 1,000 dowry deaths, the second highest in the country.

A recent campaign by the Bihar government urged people to make an anti-dowry declaration on their wedding cards. It is not uncommon to see walls of homes, businesses and government offices painted with graffiti asking people to shun dowry.

The menace even gave birth to a curious trend in the region, called “pakadwa vivah” or captive marriage, which saw men being kidnapped by a bride’s family to be married at gunpoint to avoid dowry. Such kidnappings are still being reported.

People at the event recall the days when thousands of grooms would come wearing red clothes, ready to be married off after a dowry negotiation was reached. “Without dowry, grooms would not agree to get married,” says a man.

Another man intervenes. “One shouldn’t be shocked to hear about the prevalence of dowry in the sabha. Dowry is normal in India and the sabha is just reflective of that,” he says.

One of the reasons, locals say, for the dwindling attendance at the sabha is growing intercaste marriages by the Brahmins, locally called “urhar shadi”, or love marriage.

Manish Jha, 31, from Darbhanga in Bihar, is among those who married outside his caste. His marriage to a Rajput woman faced much opposition from his family and the community.

“I was even put at gunpoint once. But I loved her so much,” he told Al Jazeera, adding that he married his wife amid death threats. They now have a son together.

“The new generation of the community doesn’t want to restrict itself. They want to marry the person they love, no matter what their caste,” he says.

Despite that, Manish believes the Saurath Sabha should be preserved as an important cultural entity of Mithilanchal.

“It also helps the poor in generating revenue. During the sabha, many people earn enough for the next few months,” he says.

Ghanshyam, a carpenter and therefore belonging to a lower Hindu caste, sells tea near the site of the sabha. He says during the olden days, shopkeepers would rejoice at this time of the year with their sales rocketing.

“But now the number of people who attend are fewer. Earlier, my father tells me, the sabha would be enough to generate revenue for six months,” he says.

Sonu, another shopkeeper, says while sales would go up by a notch during the event, it did not account for much these days.

Some attending the gathering say the ease of internet matchmaking does not appeal to them.

Muktinath Pathak, father of an aspiring groom, believes getting married at the Saurath Sabha will be safer for his son Amarjeet than a matrimonial website.

“When the marriage is done online, there is a risk of divorce and separation, but not when traditions are followed,” he says as he disappears into the crowd.

The organisers claim the method of the Saurath Sabha is way ahead of science as the standing rule here is to avoid marrying within the same clan. Derived from the ancient Hindu text of Manusmriti, locals believe marriage within the same clan leads to “impure” children.

Madhubani resident Jyoti explains that in order to find a match at the event, one has to first approach a panjikar, a traditional record-keeper or registrar, who maintains records of Maithil Brahmin families for centuries in order to ensure there is no blood relationship between prospective couples.

The panjikar system strictly dictates that the bride and groom must not be related by blood for seven generations on their father’s side and five generations from the mother’s.

Once the registrar approves a match for a generous fee, the parents go ahead with marriage preparations.

Pramod Kumar Mishra, a panjikar who has pitched a tent at the sabha, says he himself was married there in 2003. “I was chosen by my wife’s family. We are living happily now,” he says.

The panjikars still maintain a thick book of records and visit homes to note down births and deaths in Brahmin families. With their traditional work not so much in demand, they are looking for alternate ways of income while their children move out of the state in search of other work.

It is almost evening now. A woman enters the sabha and loudly declares: “My brother needs to find a bride.”

Mehek Pandey has come from Uttar Pradesh with her husband and mother to find a bride for her 33-year-old brother, Sumit Mohan Mishra. He was set to be married in June but the bride’s family backed out, leaving the family high and dry.

After the family’s attempts to find him a suitable bride failed in their town, they travelled to Madhubani on buses and trains for over 24 hours to join the sabha.

“These days, you cannot rely on online matrimonial apps for weddings, it is just not authentic,” Mehek said.