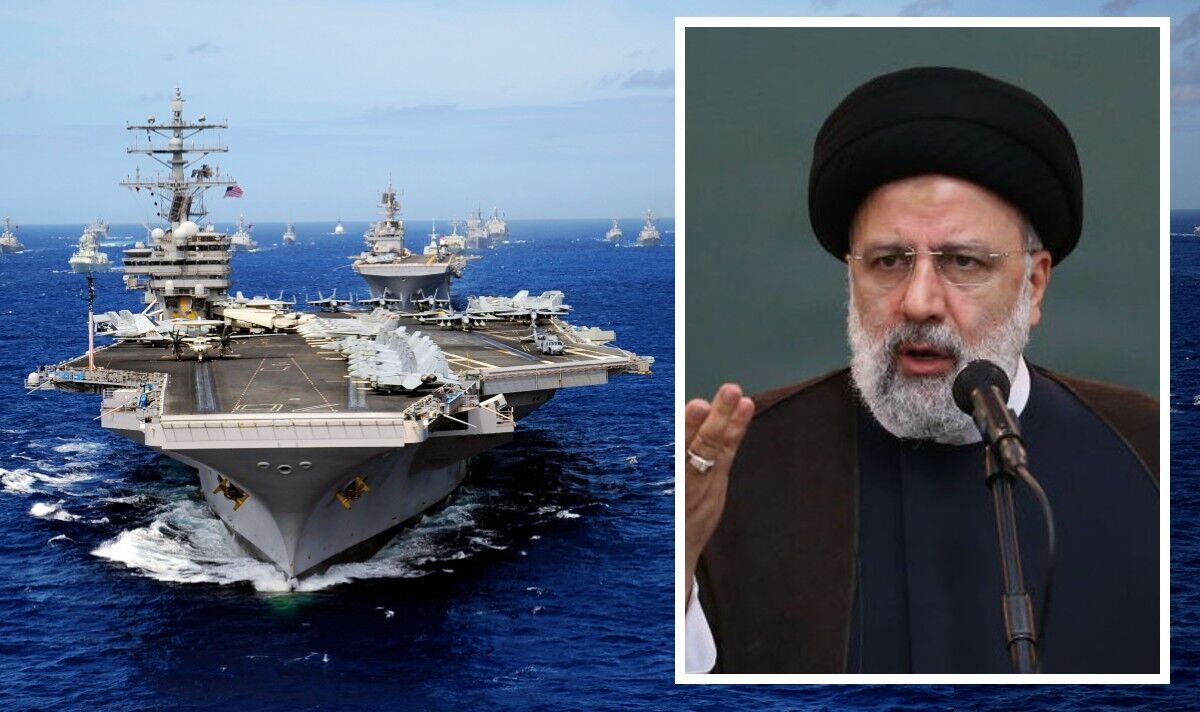 Tehran has seen ties with Washington deteriorate since the Iranian Revolution in 1979, shortly after which the US Embassy was taken hostage for 444 days. Tension remains high between the two states following former US President Donald Trump withdrawing the US from the Iran nuclear deal, also known as the Joint Comprehensive Plan of Action (JCPOA).

The latest comes as a US-based publication entitled The 19FortyFive suggests Iranian naval capabilities are more of a threat than once believed.

The report highlighted: “Although US defences are superior in every way, the potential for Iran’s successful destruction of a US naval aircraft carrier is not impossible.”

It also highlighted the threat posed by Iran’s underwater defences.

It continued: “The Iranian Navy’s fleet of Kilo-class submarines is equipped with torpedoes that could severely impact the structure of a carrier.”

Concerns have also been raised in the US at the evolving Iranian ballistic nuclear programme, something which Iran reiterates is for deterrent and defensive purposes only.

The article said: “Iran has been able to develop longer-range ballistic missiles that will ultimately be capable of hitting US assets.”

According to the article, the Islamic Republic “practised destroying US military assets, including a naval aircraft carrier, in its semi-regular wargame exercises”.

Iran has largely had to remain self-sufficient in producing military defence equipment in light of tough economic sanctions imposed on the country by the US.

Many of Iran’s military units rely on indigenously made equipment such as submarines, drones, missiles and aircraft.

Iran has raised concerns about the growing presence of US military assets in the Persian Gulf.

The US currently enjoys naval and air bases in Bahrain, Qatar and the United Arab Emirates, as well as having multiple bases and allies in the region, including Iraq, Saudi Arabia and Israel.

Tension reached a peak between the two nations in 2020 when a US drone assassinated top Iranian commander Lt Gen Ghasem Soleimani.

Iran responded by sending a volley of missiles at US bases in Iraq.

In an attempt to rekindle diplomatic ties, current US President Joe Biden has vowed to return to the JCPOA.

However, talks in Vienna between other signatory members and Iran have stalled over terms and conditions not being met, including the lifting of economic sanctions against Iran.

Iranian President Ebrahim Raisi has stressed that increased foreign presence in West Asia is not contributing to regional security, and in fact, attracts the opposite.

Speaking in Tehran, he said: “We agree that the presence of foreigners in the region will not create security, but rather, it will cause many problems.

“We also believe that regional officials are capable of solving regional problems and that the region’s Gordian knots can be untied by the region itself.”

Iran has long stated it wishes to promote peace in the Persian Gulf region, stating relations with neighbours is paramount to insuring peace.

With the FIFA World Cup in Qatar due to take place in the region towards the end of the year, focus on security will be a high priority in the region.

Reports from Doha suggest up to 500,000 extra visitors per day could be present in the tiny Persian Gulf peninsula during the world cup.

Increased focus will concentrate on shipping lanes in the Persian Gulf, which currently see 21 million barrels of oil pass through the Straits of Hormuz on a daily basis.

Iran on the other hand has offered its natural gas to Europe in light of the Russian invasion of Ukraine, yet the logistical infrastructure currently enjoyed between Russia and Europe does not yet exist between Iran and the West.