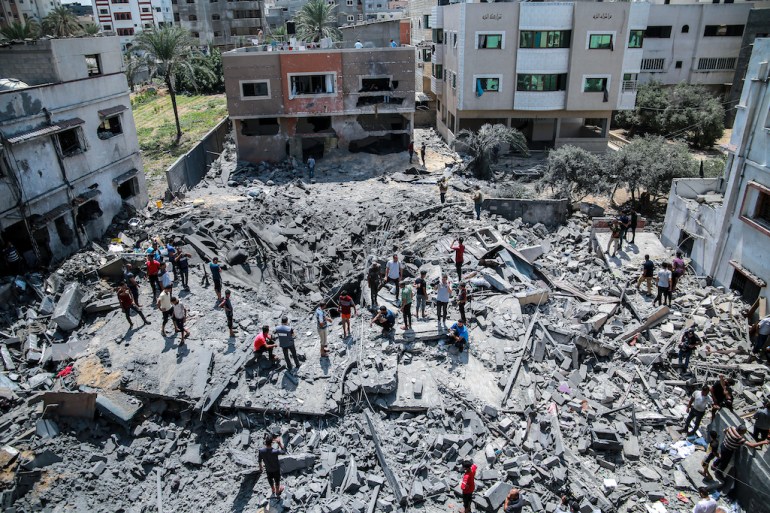 Israeli jets have pounded the besieged Gaza Strip for a second day following a wave of air strikes on the coastal enclave that killed at least 12 people, including a five-year-old girl and a commander of a Palestinian armed group.

The fighting, which began on Friday with Israel’s targeted killing of a senior commander of the Palestinian Islamic Jihad, continued throughout the night, drawing the sides closer to an all-out war.

Shortly before noon on Saturday, Israel stepped up air strikes on Gaza, flattening a west Gaza City two-storey structure and badly damaging surrounding homes. Women and children rushed out of the area.

“Warned us? They warned us with rockets, and we fled without taking anything,” said Huda Shamallakh, who lived next door, adding that 15 people lived in the house that was targeted.

Reporting from Gaza, Al Jazeera’s Youmna ElSayed said that the attacks on Gaza “have not stopped since the early morning hours”.

Standing in front of another four-storey home flattened by an Israeli strike, ElSayed said the building had housed 30 residents.

“Israel is now targeting homes,” she said, explaining that several other residences in the Gaza Strip had been targeted. “A lot of people have fallen as casualties during the strikes, many of them children.”

Reporting from the Gaza-Israeli border, Al Jazeera’s John Holman said that the area was on high alert with people on the Israeli side sheltering as some rockets from Gaza fell onto southern Israel.

“We have the first report of injuries on the Israeli side – two soldiers,” he said, explaining that 160 rockets had been launched from Gaza into southern Israel since Friday.

“It gives you an indication of how uneven this fight between Israel – which has vast military capabilities – and the Islamic Jihad is,” he added.

Also on Saturday, Gaza’s sole power plant shut down after running out of fuel, an electricity company spokesman said, five days after Israel closed its goods crossing with the Palestinian enclave.

“The power plant in Gaza has stopped due to the fuel shortage,” said Mohammed Thabet, spokesman for the electricity company.

The electricity supply is expected to plummet to just four hours a day, Thabet said.

Diesel for the power plant is usually trucked in from Egypt or Israel, which has maintained a blockade of the enclave since the armed group Hamas took control of Gaza in 2007.

In a statement earlier on Saturday, Gaza’s electricity company said the shutdown “will affect all public utilities and crucial installations and exacerbate the humanitarian situation”.

The company called on “all parties to urgently intervene and allow the entrance of fuel deliveries for the power plant to work”.

“This brings the people and health sector into a bigger crisis. There were eight hours of electricity in Gaza … this has been shortened to four. It will be nothing if fuel doesn’t enter the Strip,” said Al Jazeera’s ElSayed.

Gaza’s 2.3 million residents experience regular power shortages and last week received only an average of 10 hours of electricity per day, according to data from the UN’s humanitarian agency OCHA.

The latest round of Israel-Gaza violence was sparked by the arrest this week of a senior Islamic Jihad commander in the occupied West Bank, part of a month-long Israeli military operation in the territory.

Citing a security threat, Israel then sealed roads around the Gaza Strip and on Friday killed Taysir al-Jabari, a commander of the al-Quds Brigades, in a targeted strike.

A blast was heard in Gaza City, where smoke poured from the seventh floor of a tall building. Video released by Israel’s military showed the strikes blowing up three towers.

The Palestinian Health Ministry said a five-year-old girl and a 23-year-old woman were among those killed in Gaza, and dozens of others were wounded.

In a nationally televised speech on Friday, Israeli Prime Minister Yair Lapid said his country launched the attacks based on “concrete threats”.

The violence poses an early test for Lapid, who assumed the role of caretaker prime minister ahead of elections in November, when he hopes to keep the position.

Lapid, a centrist former TV host and author, has experience in diplomacy having served as foreign minister in the outgoing government, but has thin security credentials.

A conflict with Gaza could burnish his standing and give him a boost as he faces off against former Prime Minister Benjamin Netanyahu, a security hawk who led the country during three of its four wars with Hamas.

Hamas also faces a dilemma in deciding whether to join a new battle barely a year after the last war caused widespread devastation.

There has been almost no reconstruction since then, and the isolated coastal territory is mired in poverty, with unemployment hovering at about 50 percent.

Hamas spokesman Fawzi Barhoum said “the Israeli enemy, which started the escalation against Gaza and committed a new crime, must pay the price and bear full responsibility for it”.