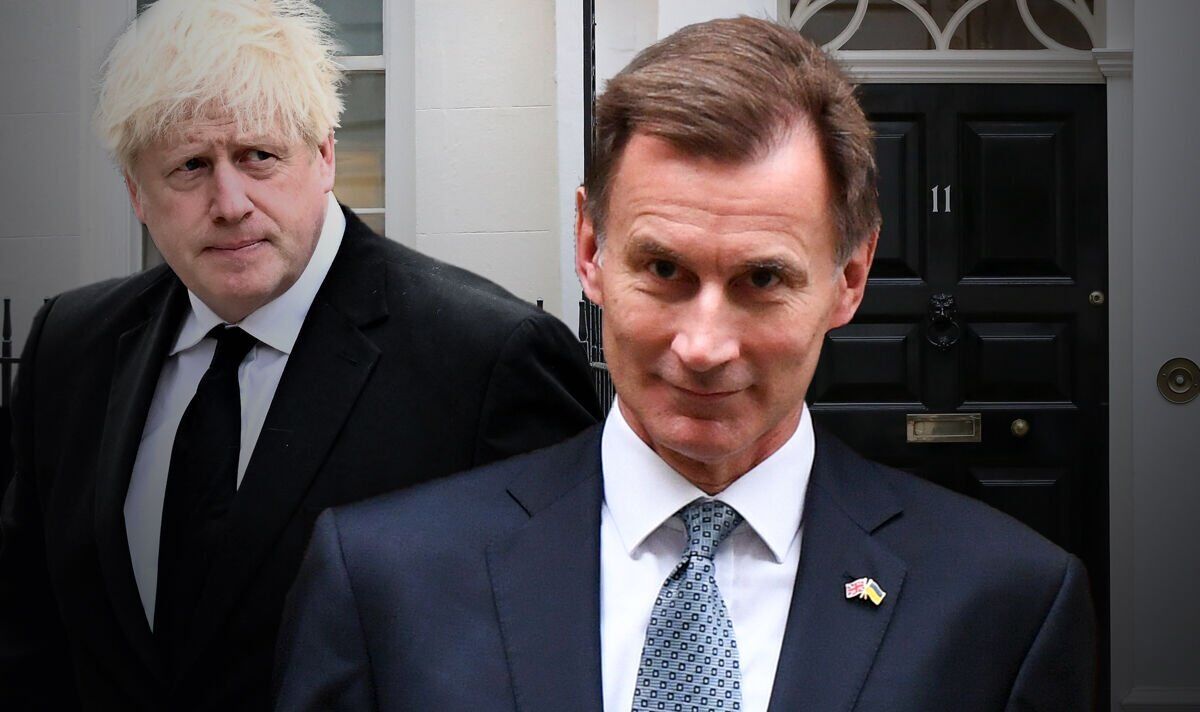 During his time in offce it was widely reported that Boris Johnson’s then fiance and now wife, Carrie Johnson, employed interior designer Lulu Lytle to do up the Number 11 Downing Street flat as part of refurbishments that reportedly cost more than £100,000. As part of the renovations, the Johnsons covered the walls in gold wallpaper which cost an eye-watering £840 per roll, left in the flat following Mr Johnson’s resignation in July this year.

Now, Jeremy Hunt, the new Chancellor, has revealed that the wallpaper was apparently not worth the money as it had already begun to “peel off”.

The expensive “gold” wallpaper, which cost a total of £2,250, was part of the refurbishments undertaken following Mrs Johnson’s criticism of Theresa May’s interior design of the flat, which she is said to have described as a “John Lewis furniture nightmare”.

Ahead of moving into the property with his family, Mr Hunt had eagerly gone to inspect the infamous wallpaper at the earliest opportunity, only to discover its premature demise.

Not only this but the Chancellor revealed that the former Prime Minister Liz Truss – who was in office for a record-breaking 44 days – had already painted over it.

Speaking at The Spectator’s parliamentary awards held on Thursday, November 24, Mr Hunt revealed the wallpaper‘s state in what he described as a “world exclusive” scoop.

He said: “We are moving in, as it happens this weekend. I had one or two other things on until then. We did go in though, just to have a look around the flat first and, of course, where did we want to go first? We wanted to go and see the wallpaper.”

The father of three continued: “The massive disappointment was to discover that that wallpaper – this may be a world exclusive – had started to peel off of its own accord and had actually been painted over by Liz Truss. So I will be saying to my children: scratch over there, there’s gold in them walls.’”

It is thought that the “hand-crafted” wallpaper, made by Lulu Lytle, interior designer and co-founder of Soane Britain, is not actually made of gold, as she has “old gold” and “yellow gold” prints in her collection.

According to a leaked copy of the estimated cost of the renovations, the Johnsons also purchased two sofas from Soane Interiors costing £7,560 each, and a rug worth £7,000.

The luxurious refurbishment of the Downing Street flat saw Mr Johnson come under fire as it was alleged that he had broken spending rules following claims they had partly been paid for by a £50,000 donation from Lord Brownlow.

However, Number 10 insisted that Conservative Party funds were not used, and Mr Johnson was later cleared and settled the bill himself.

Later, the Conservative Party was fined almost £18,000 by the Electoral Commission after it was found to have breached electoral law over the way the money was recorded.

Since the time of Sir Tony Blair, Prime Ministers have decided to live at the more spacious Number 11 Downing Street which has four bedrooms.

However, the current leader, Rishi Sunak, has moved away from this 25-year-old tradition and has instead opted to live at the traditional residence of Number 10 with his wife Akshata Murthy and their two daughters, the family having previously lived in No 10 during his time as Chancellor.