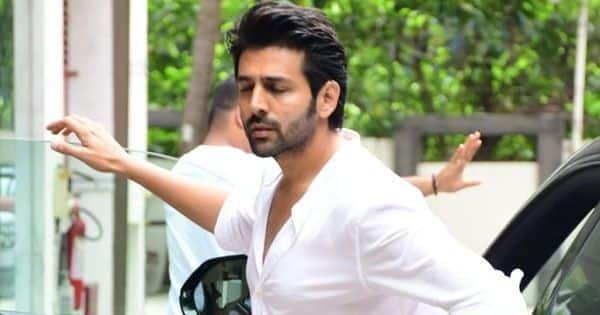 Vijay Deverakonda became the hottest topic of discussion when Janhvi Kapoor and Sara Ali Khan graced Karan Johar‘s chat show Koffee With Karan 7. The two divas referred the Liger actor as ‘Cheese’ while expressing their wish to date him. They also mentioned Kartik Aaryan in riddles when they talked about their exes. So when Kartik was recently spotted in the city, the paparazzi tried to pull his leg when they asked him if he likes ‘cheese’ or not. Also Read – Kajol to Sara Ali Khan and more Bollywood stars who hate to spend money

“Cheese pasand hai ya nahi aapko?” asked the shutterbugs. However, Kartik looked totally disinterested. He gave them an awkward smile and decided not to answer the question. As the video went online, netizens quipped that both his exes like cheese. However, many people were unhappy with the way Kartik was asked about cheese. They requested the photographers to leave him alone. Also Read – Koffee With Karan 7: Sara Ali Khan and Janhvi Kapoor’s cosy pictures with ex-boyfriends go viral after Karan Johar’s explosive revelation of them dating siblings

During the rapid-fire round, Sara apparently took an indirect dig at Kartik by saying that her ‘ex is everybody’s ex’. Later, when Kartik was asked about one thing that he is proud of, he immediately replied saying ‘rapid-fire’ shows. Also Read – Ek Villain Returns Box Office: Arjun Kapoor’s film is a success, the actor beats Ranveer Singh, Ayushmann Khurrana, John Abraham

In the past, there have been rumours that Kartik and Sara dated each other while filming Love Aaj Kal. After the film tanked at the box office, they went separate ways. Later, Kartik was supposed to share screen with Janhvi in Dostana 2. There were reports that they had an ugly fallout during the making of the film and they decided to end their friendship.