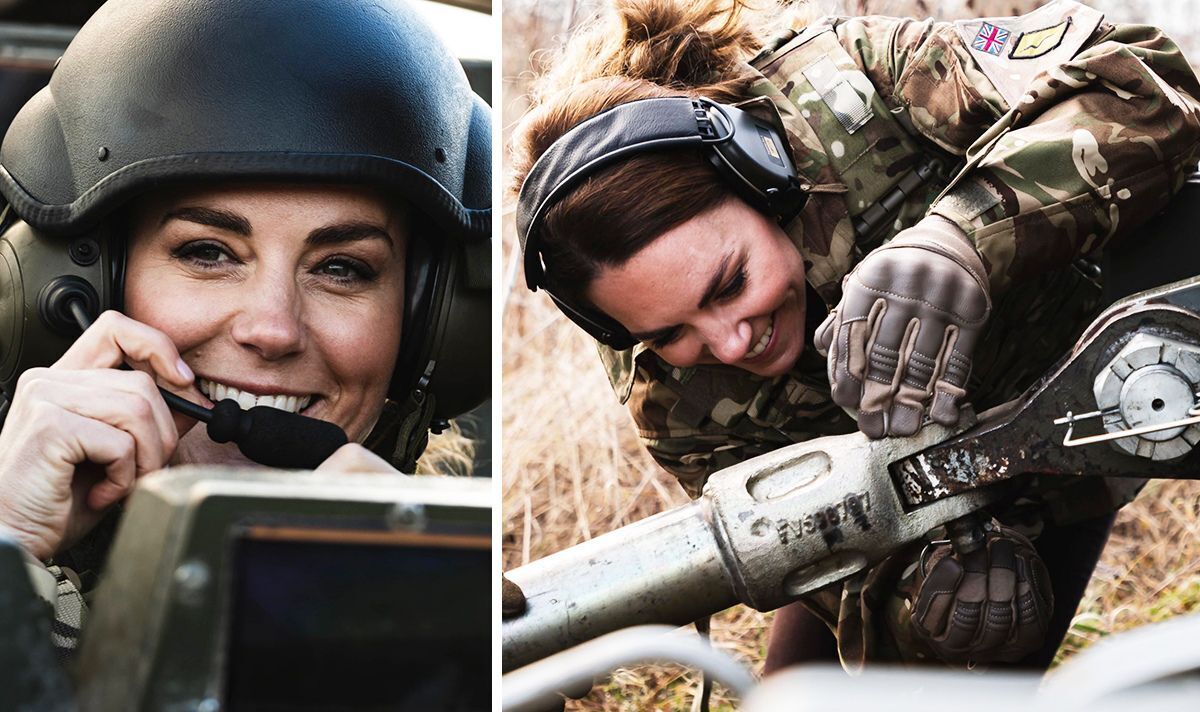 Writing on the The Duke and Duchess of Cambridge’s Twitter account, the royal wrote: “William and I would like to pay tribute to the brave men and women, past & present, serving in all of our armed forces, at sea, on land & in the air, here in the UK and around the world. Thank you for all you and your families sacrifice to keep us safe.”

The five photos released by the Palace were from when the Duchess spent time with troops from the British Army last year.

Kate got stuck in and even dressed in military uniform during the day’s events.

She visited the Pirbright Training Academy in November where she spent time with the 101 Operational Sustainment Brigade at Abingdon Airfield.

Kate said she was “honoured” to spend time with the troops to learn about how the force train “servicing personnel and new recruits”.

In the post, the mother-of-three wrote: “It was wonderful to see first-hand the many important and varied roles the military play day in, day out to protect us all”.

The photos show the glamorous royal getting her hands dirty helping repair machinery.

In one photo, she beamed while in a military vehicle wearing an army helmet.

It is understood that Kate also plans to spend time with the Royal Navy and Royal Air Force.

Armed Forces Day, held on June 25, is a chance to show support for the men and women who make up the Armed Forces community in the UK.

Previously called Veterans’ Day, Armed Forces Day has been running since 2006, and is celebrated all over the country – despite not being a public holiday.

Gordon Brown started the tradition when he was Chancellor of the Exchequer as he believed it was a way to make sure the sacrifices made by veterans were never forgotten.

It was renamed in 2009 to include all of the military community – not just veterans- and has since been held on the last Saturday of June every year.

Events are being held up and down the country to thank our military heroes present and past.

Earlier this week, the Duke and Duchess of Cambridge visited Waterloo Station in London to unveil a new Windrush Monument to mark Windrush Day.

For the statue unveiling event, Kate dazzled in a white Alexander McQueen blazer she previously sported on a trip to Jamaica earlier this year.