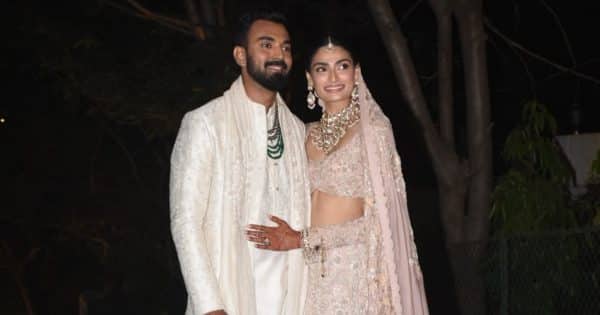 India’s dashing batsman KL Rahul and his long-time girlfriend Athiya Shetty tied the knot on January 23, 2023. The news was celebrated all over on social media. Some cricket players like Pragyan Ojha attended the small function held in Khandala for just 100 guests. It seems they are planning a huge reception later in Mumbai for 300 plus guests. The two looked like a dream couple. She donned a blush pink lehenga while she was in a sherwani. Athiya Shetty has not had much success in Bollywood after her debut. Even KL Rahul has faced bad trolling whenever he is out of form. Also Read – Athiya Shetty wore wedding lehenga that took 10,000 hours to make? Here’s all that’s special about her bridal wear

Celebrity astrologer Pandit Jagannath Guruji had this to say about their careers. He tells us, “Athiya Shetty and KL Rahul have always looked brilliant and magnificent together. Even their married life will be full of goodness and prosperity that will be accompanied by an eternal bond that is going to last lifelong.” He further says that they are in sync when it comes to perspective over things. It looks like KL Rahul and Athiya Shetty will be friends throughout, which will help their marriage. He says it will let be honest with one another. Also Read – KL Rahul-Athiya Shetty Wedding: A look at their love story

Talking about KL Rahul’s career, he said, “KL Rahul’s Moon and Sun with the combination of Jupiter looks very strong. It indicates that he shall only be progressing in his career from now onwards, thanks to his lady luck, Athiya Shetty. He’s also an emotional person just like Athiya which makes them even more compatible with each other in the long run.” Also Read – KL Rahul-Athiya Shetty sangeet: Couple, their family and friends groove to Pathaan songs, Salman Khan, Kartik Aaryan numbers [Watch Video]

The astrologer said that Athiya Shetty and KL Rahul will be forever committed to one another. She is a lady who believes in true love that lasts for a lifetime. He said, “She’s a one-man lady who is passionate, emotional, and honest about things just like her partner, KL Rahul. Maybe, this is the reason why they share such a great bond with each other.” Athiya Shetty is a Scorpio and will soon explore new options to start her career as an entrepreneur. He said, ” However, that doesn’t mean we won’t be seeing her on big screens in days to come.”

Pandit Jagannath Guruji further said, “Athiya’s Mercury, Moon, and Ketu seem to remain perfectly aligned this year which creates a strong possibility of Athiya getting successful in her field. Also, her managing skills are also expected to heighten post-marriage which will allow her to heavily contribute to her entrepreneurial journey.”