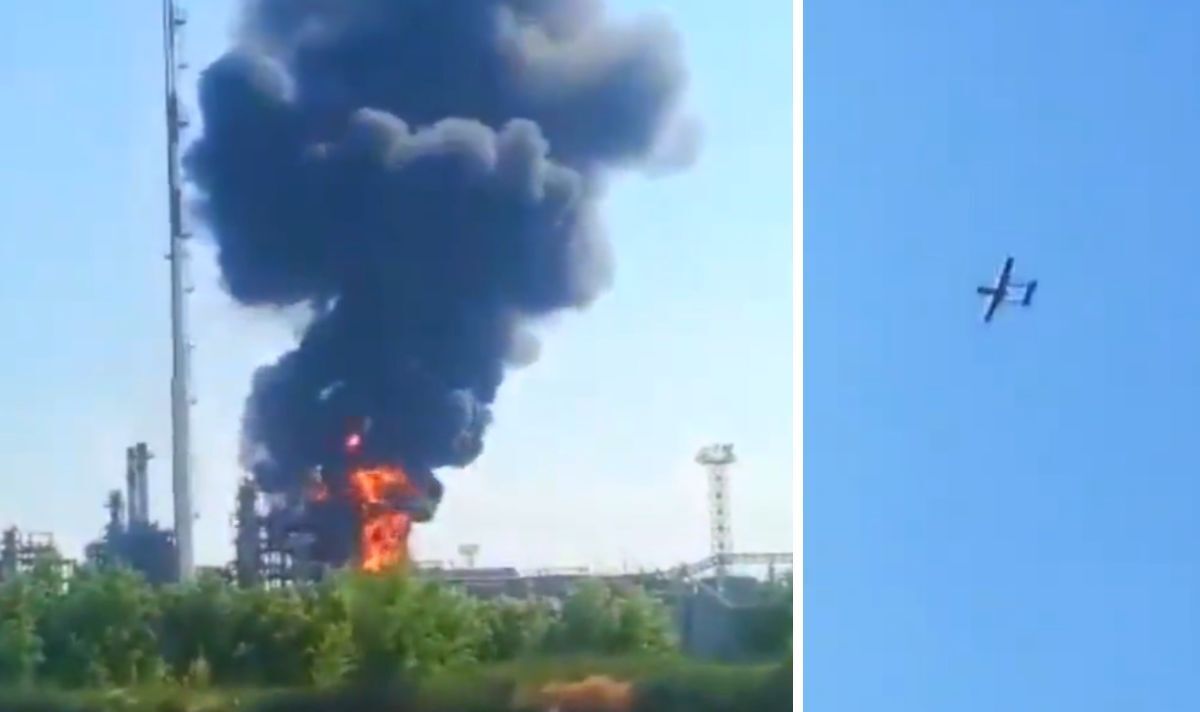 Shocking footage from the Rostov region, an area within Russian borders, has shown a reported drone attack conducted by Ukrainian forces. The video shows a drone hovering metres overhead, moments before the aircraft takes a dramatic downturn and soars towards a building, now identified as Noboshakhtinsk oil refinery. The drone used in the attack has been described as “Ukrainian loitering munition” a form of air assault weapon likely to be a Phoenix Ghost drone. The kamikaze drone technology was included in American military aid provisions to the Ukrainian frontline forces fighting in the war.

In the footage, the Novoshakhtinsk oil refinery is shown to erupt in a fiery explosion shortly after the plummeting drone makes contact.

Thick black smoke billows into the sky above and sharp flames rise from the building as panicked shouting and frantic radio transmissions from witnesses can be heard in the background.

Regional Governor Vasily Golubev confirmed the oil refinery was forced to suspend operations on Wednesday after a fire broke out.

In a statement issued on the messaging platform Telegram, Mr Golubev confirmed that “fragments of two drones were found on the territory of the plant.”

The Regional Governor continued: “The fire on the area of 50 square metres was eliminated.

“There were no casualties and personnel were evacuated.”

Mr Golubev did not confirm the cause of the blaze but did acknowledge an investigation into the incident was already underway.

Ukraine has not acknowledged formal responsibility for the attack but has also not officially denied targeting areas within Russian borders.

The Ukrainian military has been accused of launching several attacks on Russian land since the outbreak of the war, but authorities have not certified responsibility for the incidents.

In April, the Governor of Belagrod accused President Zelesnky’s forces of launching an attack on an oil depot on Russian soil.

A spokesperson for the Ukrainian Defence Ministry, Oleksandr Motuzyanyk, neither confirmed nor denied Ukrainian involvement in the attack.

Mr Motuzyanyk said: “Ukraine has been defending itself to resist aggression.

“It does not mean that Ukraine has to bear responsibility for all those catastrophes and all those events that happen on the territory of the Russian Federation.”

The so-called suicide drone reported to have been used in the attack on the Novoshakhtinsk oil refinery is likely to be a Phoenix Ghost Drone pledged as part of the US military aid to Ukraine.

In an April announcement, the US Department of Defence announced a package including “over 121 Phoenix Ghost Tactical Unmanned Aerial Systems,” would be provided to meet “critical Ukrainian needs.”

The technology has been compared to the Switchblade drone, another form of loitering munition which is small enough for troops to transport the device in a backpack.

Pentagon Press Secretary at the time of the announcement, John Kirby, asserted the Phoenix Ghost systems had been developed prior to the Russian invasion of Ukraine but the design would “very nicely suit [Ukrainian] needs.”