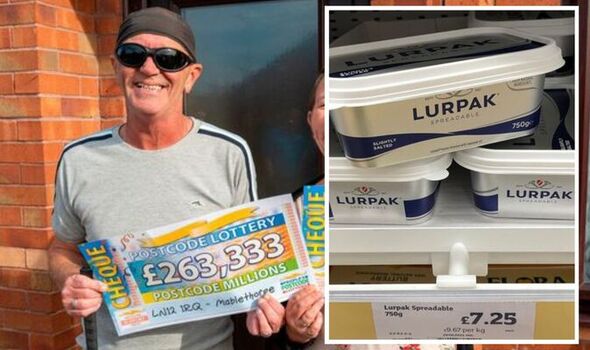 Lottery winner says first thing he will spend his share of £3.9m windfall on is Lurpak

A winner has said the first thing he plans to buy is 10 packs of Lurpak butter after winning part of a £3.9million jackpot. Newly-married Cyril Hellewell, 56, was among neighbours who won the People’s Postcode Lottery as their street was hailed the “UK’s luckiest street”. The LN12 1RQ postcode in Mablethorpe, a seaside town in the East Lindsey district of Lincolnshire, was revealed as the winning postcode.

Eleven of the neighbours on the street pocketed a £263,333 cheque, while another two managed to scoop £526,666 thanks to buying two tickets each.

The winners have now revealed what they plan to spend the money on, with some admitting they “just couldn’t believe it” when they received the life-changing amount of money.

Mr Hellewell says he has now become a “half-a-millionaire” after cashing in on £526,666.

Speaking about how he found out about his winning prize cheque, the father-of-two says his wife, Maria, read the numbers out loud.

The joke appears to be in relation to the rise in food costs (Image: People’s Postcode Lottery / Getty)

Mr Hellewell told the Mirror: “It’s a miracle. I was just flabbergasted, absolutely flabbergasted, I just couldn’t believe the amount; It really is once in a lifetime stuff,” adding that some of the winnings would go to help his and Maria’s children.

“We can sort the kids out – which is a great feeling,” he added.

He went on to say that the money will help the pair – who got married last year – go on their dream honeymoon, saying: “We’ve always wanted to go to Egypt together. So, we can now do that and have the honeymoon we never went on.”

However, the dad has admitted that his first purchase with the eye-watering sum of money will not be as luxurious, claiming that he’s going to be going straight to the shops to buy butter, explaining: “First thing I’m going to get is some Lurpak for the fridge, it’s that expensive these days. I can buy at least 10 packs now.”

Bonita Haley, 76, was the second neighbour who netted £526,666, after finding out about the win alongside her husband.

Speaking on her behalf, Peter said: “One day you’ve just got your pension, the next day you’ve got over half a million. It’s quite something, we’re still in shock.”

Recalling the moment they found out the money, Beverley says the couple yelled out in disbelief as their grandkids watched on, as she said: “Oh my god! Look! Oh, kids we’ll have a good old Christmas now… and many Christmases to come.”

DON’T MISS:
Gang matrix of suspects culled as 1,000 Londoners removed [INSIGHT]
Save £625 a year on bills with clever radiator hack – to do ‘now’ [COMMENT]
Meghan Markle slammed for blaming reputation on ‘ethnicity’ [PICTURES]

The 82-year-old, who worked as a nurse for over 30 years, went on to add that she never thought she would win such a large sum of money, saying: “Never in my life did I think that this would happen to us. I’d love to see my bank managers face when that goes in my bank account.

“I don’t think I’ve ever made that much money in my whole life, and I’ve worked from when I was 15 until I retired.”

She continued: “We can really help out our kids, grandkids and great grandkids. It’ll be a Christmas to remember.

“We’ve always talked about buying a bungalow – we can actually do that now.”

DON’T MISS:
Horror as pack of 20 hunting hounds hit by train with four dead [INSIGHT]
Putin accused of having three ‘body doubles’ amid strange claim [COMMENT]
Guard who missed a Buckingham Palace shift after drinking too much rum [PICTURES]

Cyril has said that his first ‘luxury’ purchase will be butter (Image: People’s Postcode Lottery)

Michael, who worked as a long-distance lorry driver, added: “We gave up the mobility car that we had last year and Beverley needs a special car to get in and out of. We could now buy a Citroen Berlingo to make our life easier when getting about locally.”

Another neighbour Samantha Douglas, 54, was left ecstatic after winning £263,333, after receiving the news while working back-to-back nightshifts at a local care home.

Samantha, who has lived on the street for over 40 years, said: “It’s fantastic, I’m over the moon,” adding that: “We’ve not even gave it a thought about what we could buy because we’ve never thought about winning this sort of money – never in our wildest dreams really.”

“There will be something for our children and my first buy will be to replace our 20-year-old car with a new one.”