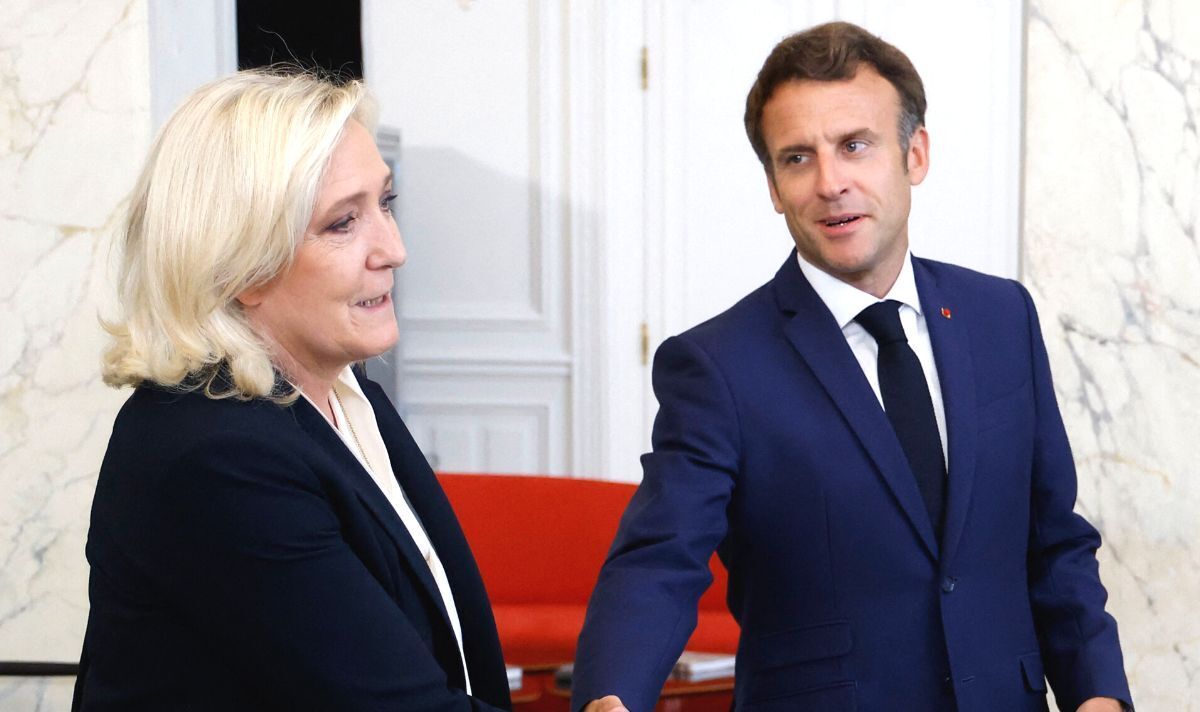 French journalist Anne-Elisabeth Moutet told GB News that Ms Le Pen “definitely is back” after becoming the “first single party in position” in the French National Assembly. Despite losing the Presidential election earlier this year, party spokeswoman Laure Lavalette said the National Rally on Sunday had become the “constructive opposition” in the House. Ms Moutet said that the result had been “a big shock” for both Mr Macron and Ms Le Pen.

Ms Moutet said: “[Marine Le Pen] definitely is back. And her party is back. To be honest, Macron was flabbergasted by his defeat.

“And my spies during the National Rally evening on Sunday night reported that [Ms Le Pen’s party] was flabbergasted by their victory.

“They thought they would do better but they did not expect to have 89 MPs in the House, where Les Republicans, Nicolas Sarkozy’s party, only got 63.

“So, that was really a big shock. And if you look at the left wing alliance, Jean-Luc Melenchon’s actual party only has 73 MPs so the first single party in position is actually the National Rally in France.

“That is a real upset given people said [Ms Le Pen] would never get even close to power.”

Mr Macron came under intense pressure today from opposition leaders who have been emboldened by renewed support from a French public angry at a rising inflation rate.

Sunday’s National Assembly election results, which saw the President’s liberal coalition Ensemble lose their majority, could herald an era of political instability not seen for decades in France.

If Macron fails to secure support to get laws adopted, France could face a long spell of political gridlock that may later on compel him to call a snap election.

Senior ministers said the government would continue its work and seek support in parliament whenever it needs a majority.

Edouard Philippe, Macron’s former prime minister and an influential figure, urged parties to form a coalition to secure a governing majority. This would be a first in modern French politics.

Mr Philippe said: “For the first time in France, we need to form a coalition, a grand coalition of people who spontaneously don’t wish to work together and who put forward different political programmes.”

He said he could “imagine” reaching a deal with the conservative Les Republicains, Philippe’s former political family from which he defected after Macron was first elected in 2017.

But Les Republicains leader Christian Jacob said after meeting Macron: “I told the president that it was out of the question to enter into a coalition deal, that would be a betrayal of our voters.”

Mr Macron needed 289 seats in the Assembly to retain his outright majority but his liberal political coalition Ensemble only gained 245.

The coalition, made up of a range of moderate parties including Mr Macron’s La Republique En Marche, lost dozens of seats to both the left wing alliance Nupes and Ms Le Pen’s National Rally.

Nupes gained 131 seats, making them the lead opposition, while National Rally increased their Assembly presence by more than tenfold to 89 seats.

But voter turnout was low with young voters in particular reportedly turned off by France’s fourth round of national elections since April. The total turnout was a mere 46.23 percent.