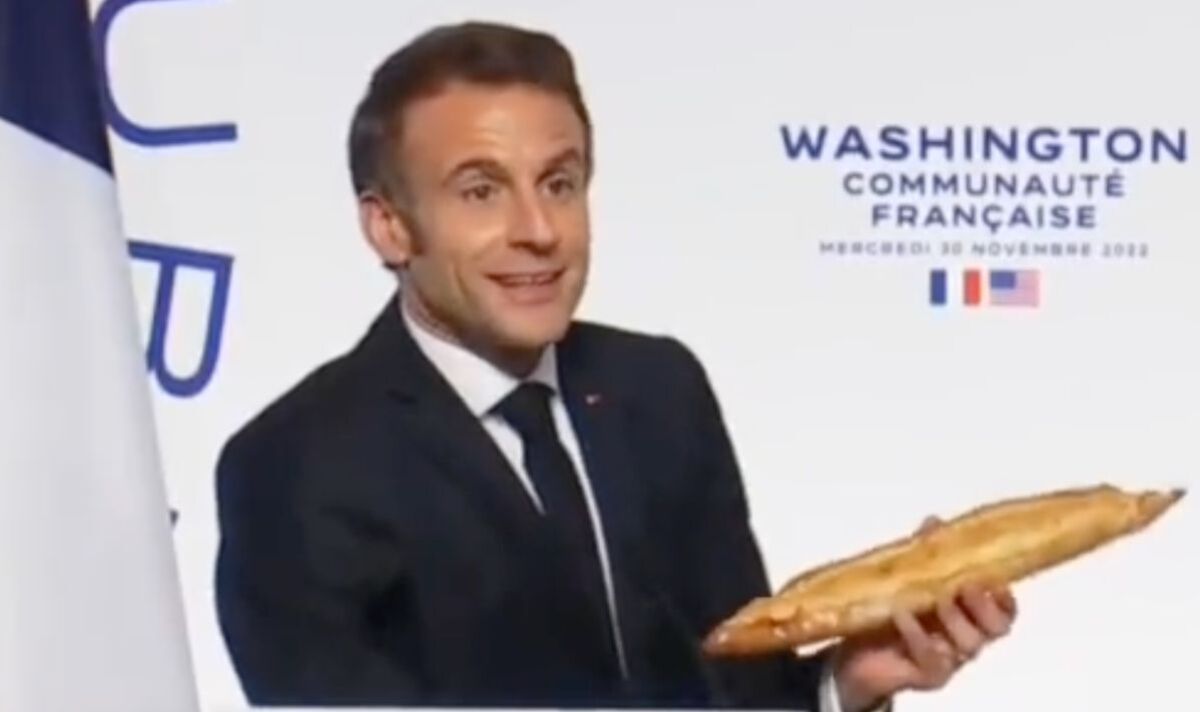 Emmanuel Macron praised the “inimitable” French baguette during a speech at the French embassy in Washington DC, commending French producers for their “know-how”. The French leader marked the addition of the staple to the United Nations’ Intangible Cultural Heritage list while he was visiting President Joe Biden in a bid to avert a trade war between the United States and the European Union.

Showing off a French baguette to an audience in stitches, the French President said: “These few centimetres of handed-down savoir-faire contain the absolute spirit of French savoir-faire.

The crowd erupted in laughter as Emmanuel Macron proudly wielded the French baguette.

Despite the obvious humiliation he was facing, he continued: “In other words, it’s something inimitable.

“It seems purely material – but no!” he added, as he looked lovingly at the crusty piece of French baking in his left hand.

In an arguably excessive patriotic zeal, the French leader said: “The baguette represents that. Many have tried [to replicate it] and [ended up] producing a tasteless industrial thing.

“Why does it taste so good? Because no one shared the patent! Because it’s handed down. The French baguette is inimitable!

“And the ‘French tough’  in our baguette is the same in other fields. It means there is a little extra savoir-faire and an extra part of our soul.

“Congratulations to our baguette!” he added as he handed it back to baker Stéphane Grattier.

The comical interlude came a day before Emmanuel Macron snatched an unexpected victory from his US counterpart during a visit to Washington DC on Thursday.

The biggest source of contention was Biden’s green subsidies and lower taxes for American businesses in a move branded as protectionist. The EU claims it unfairly tilts trade away from the bloc and threatens to destroy European industries, according to Politico Europe.

EU’s Foreign Policy Chief Josep Borrell urged Washington to respond to European concerns: “Americans — our friends — take decisions which have an economic impact on us,” he said in an interview with Politico.

DON’T MISS:
US accused of ‘profiting from the war’ as EU flounders over gas prices [REPORT]
Biden is embracing Macron because he knows it will irritate British [OPINION]
Biden rolls out red carpet for Macron as US eye close relationship [REPORT]