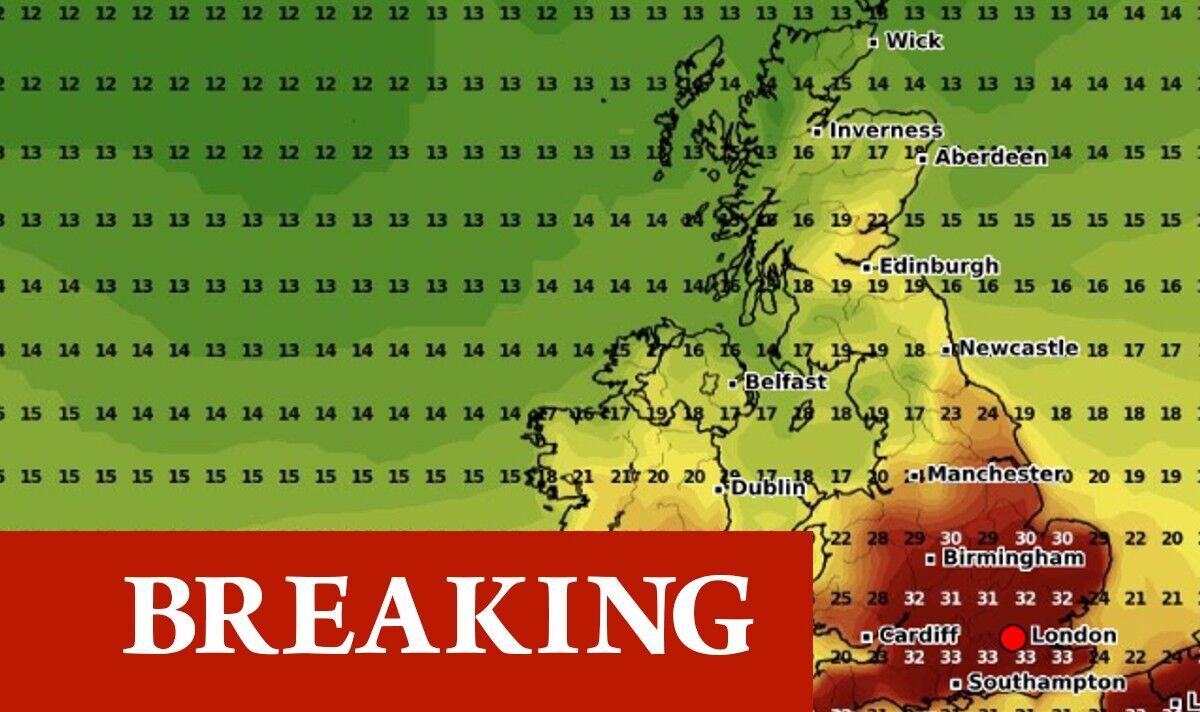 In its latest forecast, the Met Office warned high pressure will dominate the UK weather pattern over the coming days, bringing dry weather for many. It said the only exception would be the far northwest. It added temperatures will start to climb into next week.

It comes as the first hosepipe bans were introduced in parts of southern England with further restrictions earmarked for the south east England and south-west Wales later this month.

Southern Water, whose domestic water-use restrictions are now in place across Hampshire and the Isle of Wight, encouraged people to “gently remind” neighbours of the restrictions in place if they saw anyone breaking the rules.

The Met Office has warned there is very little meaningful rain on the horizon for parched areas of England with temperatures set to climb into the 30s next week.

It could mean another heatwave, when there are above-average temperatures for three days or more.

However, it is likely conditions will be well below the 40C seen in some places in July.

The Met Office’s latest weather report comes after its long range forecast on Tuesday showed warmer than average conditions threaten to hold out until the end of October.

Government meteorologists blamed warming coastal waters, climate change and the return of high pressure, which was the driver for last month’s heatwave.

A Met Office spokesman said earlier this week: “The main signals for August are for high pressure to extend northeast towards the UK at ties, with lower pressure to the south.”

READ MORE ABOUT KATE’S HEARTFELT LETTER TO A SCHOOLGIRL

Elsewhere, golf courses have seen their fairways dry up while the source of the River Thames has moved five miles downstream for the first time.

The Rivers Trust described this as “unprecedented” and “sadly emblematic” of the climate emergency.

All of this has put pressure on the environment, farming and water supplies. It is also fuelling wildfires.

Gardeners are being encouraged to grass on their green-fingered neighbours if they spot them repeatedly breaching hosepipe bans with rule-breakers facing fines of up to £1,000 if taken to court. Water companies have said they prefer “education over enforcement”.

The latest forecast from Meteogroup shows any daytime showers on Friday will soon clear during the evening to leave it dry with late spells of sunshine.

Overnight will then be dry with long, clear spells although variable amounts of cloud cover will build and showers will spread into western Scotland and may merge into longer spells of rain by dawn.

Saturday will be a largely dry and bright day with spells of summer sunshine, however, there will be variable amounts of cloud cover around too, according to Meteogroup.

A chance of showers will be mostly across Northern Ireland and northern Britain. These will merge into longer spells of rain across northern Scotland during the afternoon.