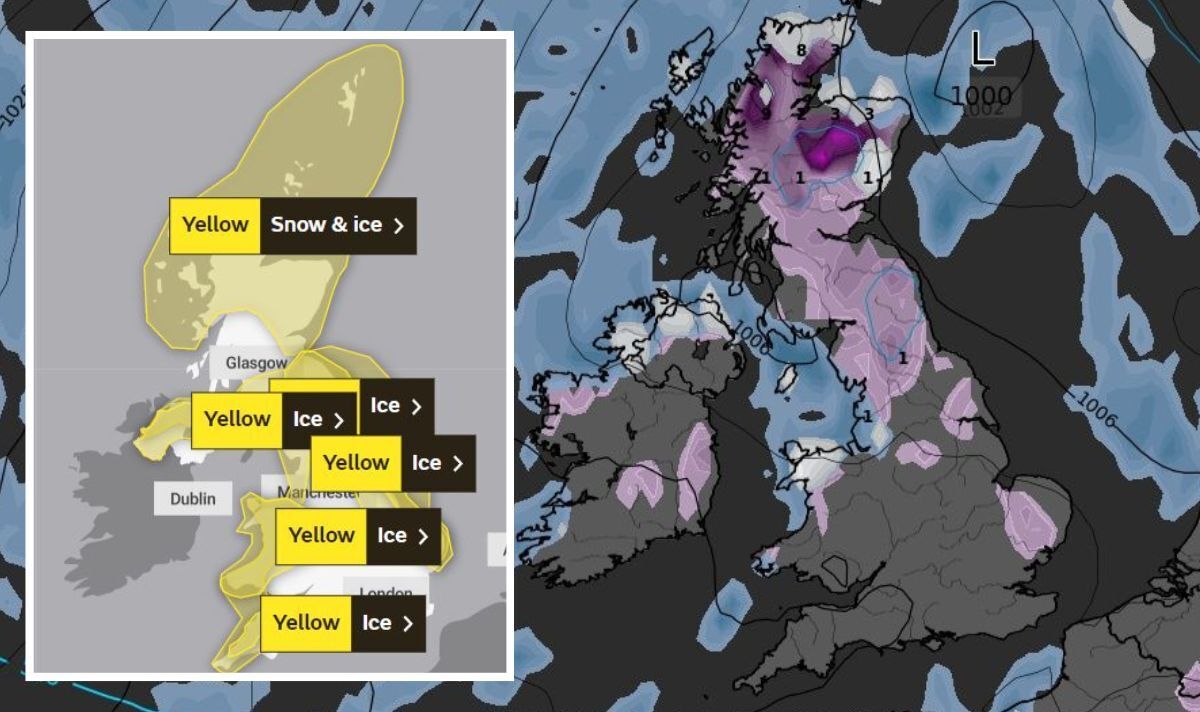 The Met Office has updated its weather warnings for England, Scotland, Northern Ireland and Wales as widespread ice and snow is expected over the next 24 hours. All of northern Scotland is under a snow and ice warning which is in place until midday tomorrow. It says: “Snow showers and icy surfaces may bring some travel disruption. Showers will fall as snow to low levels at times.

“Accumulations of 2-5 cm are possible at lower levels, with 10-15 cm above 200 metres. Some drifting and blizzard conditions are likely in the strong northerly winds. In addition, ice is likely to form on untreated surfaces, mainly where some of the showers fall as rain or sleet on some coasts.”

It has been updated to include Dundee and Fife to cover the risk of snow this morning. People must be aware of disruption to roads and railways, and even delays due to the state of the roads. Injuries are also likely as people slip and fall on icy surfaces.

Residents are also being warned to be aware of roads that have not been gritted – as usually it’s only the main routes in a town or city that are targeted when ground temperatures fall below zero.

Then, from 4pm until noon tomorrow a widespread ice warning comes into place. The Met Office adds: “Frequent wintry showers are likely to fall on frozen surfaces in places, leading to the formation of icy patches. These showers are likely to fall as snow on high ground, with the potential for several centimetres to accumulate over parts of southern Scotland, Northeast England, N Wales, the North York Moors and Northern Ireland.”

It warns again that there could be some slips and falls, and that people need to be aware of untreated surfaces. Along with the weather messaging, there is also a level 3 severe alert in place for health.

The amber alert is in place until Monday at least – but urges a community spirit among the nation. It says: “Rather cold conditions are expected to turn colder across much of the UK later Wednesday and through Thursday as air from the Arctic spreads south across the country.

“Very cold nights are expected, with widespread frosts and potentially severe frosts. Daytime temperatures persisting near or just above freezing, with overnight temperatures continuing to trend downwards. Wintry showers are also likely to affect some coasts, perhaps pushing into some inland areas at times, bringing a risk of icy patches.

“Look out for friends and family who may be vulnerable to the cold, and ensure they have access to warm food and drinks and are managing to heat their homes adequately. Try to maintain indoor temperatures to at least 18C, particularly if you are not mobile, have a long-term illness or are 65 or over.”

READ MORE: People may be able to get £25 as temperatures drop below zero

Met Office chief meteorologist, Steve Willington, said: “As an Arctic maritime airmass settles across the UK temperatures will fall with widespread overnight frosts, severe in places, and daytime temperatures only a few degrees above freezing.

“However, the cold air from the Arctic will also bring brighter conditions, with some dry, sunny spells, particularly away from the coast and where winds are light it could feel pleasant in the sunshine. Some patchy freezing fog is also likely.”

Although these warnings have been amended to include more areas, and to reflect an accurate time of when the ice may thaw out, there are likely to be more issued in the coming days. Mr Willington added: “Yellow National Severe Weather Warnings for ice and snow have been issued for parts of Scotland, Northern Ireland, Wales and the east coast and South West England.

“Showers will turn more wintry with an increasing risk of snow as the week progresses, particularly in coastal areas or over higher ground. There will be widespread frosts with temperatures falling to as low as -10°C overnight in isolated spots by the end of the week. More severe weather warnings may be needed as we head through the week.”

Dr Agostinho Sousa, Consultant in Public Health Medicine at UKHSA, said: “Cold weather can have serious consequences for health, and older people and those with heart or lung conditions can be particularly at risk.

“If you have a pre-existing medical condition, you should heat your home to a temperature that is comfortable for you. In rooms you mostly use such as the living room or bedroom, try to heat them to at least 18°C if you can. Keep your bedroom windows closed at night. Wearing several layers of clothing will keep you warmer than one thicker layer.”

RAC spokesman Rod Dennis added: “With temperatures plummeting this week, many drivers might be taken aback by the cold after an exceptionally mild autumn. Our advice is to be winter ready – check tyres are properly inflated and with good tread, while topping up oil, coolant and screen wash levels if needed.

“Drivers with older batteries in their cars might also wish to give their vehicle a 20-minute drive before colder conditions arrive to ensure the battery can cope with sub-zero temperatures. It’s also worth having a fully-charged mobile phone and carrying a blanket in case of a breakdown to keep warm.”